Tania Gunadi is one lucky lady. So far, the rising Hollywood starlet’s life has been defined by several fortunate events that have led her to where she is now.

The Indonesian actress, who has a lead role in Disney Channel series “Aaron Stone,” got her first stroke of luck a decade ago when she was selected in the Green Card Lottery.

“I was the happiest person on earth,” the 25-year-old actress said about moving to America. “It is much cleaner in the U.S. than in Indonesia. I could actually breathe. And there were lots of different kinds of food.”

Every year after that, Tania’s siblings submitted the names of their sister and parents to the Green Card Lottery. The lottery is held once a year and winners must move within a year if they accept the prize. 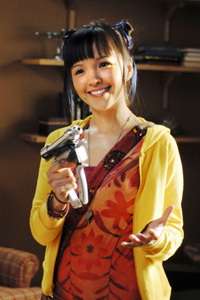 After she was finally selected, Tania finished high school in Indonesia, moved to California and attended English classes. Before moving to the U.S., Tania desperately needed help with her English speaking and reading skills. Her brother, who was the assistant manager at a Pizza Hut, suggested she work with him to improve her English. His reasoning was that direct communication with people would accelerate her English skills, so he got Tania a job at taking phone orders.

“He told me the job was really easy,” Tania said. “All you had to do was read the script next to the phone when people called. I thought, ‘Oh my God, I can totally do that!’” It didn’t turn out to be that simple. In fact, Tania had no clue what anyone was saying.

Tania currently plays girl-next-door Emma Lau in Disney’s “Aaron Stone” series, about a video game that becomes reality. Since the show is filmed in Toronto, Tania was able to experience her first true winter. Having only lived in tropical Indonesia and sunny California, she was not prepared for the Canadian winter. Tania was so cold during the last two weeks of filming that she forced herself to learn how to cook just so she could stay indoors.

“I’m very happy to find this career,” Tania said. “It’s almost like an accident because I didn’t know about it before getting here. I feel so blessed to find acting as my career. It’s something that I love to do and am able to make a living off of.” And as long as Tania’s lucky streak lasts, we’ll be seeing her for years to come.