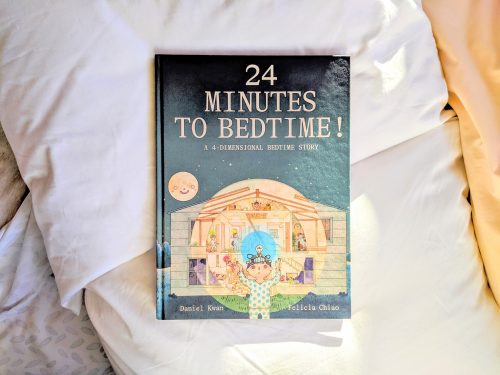 Felicia Chiao never expected to be a full-time illustrator. She had a job as an industrial designer at the renowned design consultancy IDEO, working on their food design team. She expected to continue in this industry for the rest of her life. But life often has other plans.

“When A24 shows up and says Daniel Kwan wants to work with you, you just have to do it,” she tells me during a phone interview shortly before the announcement of the collaboration. Kwan had written two children’s books while working on “Everything Everywhere All At Once,” and wanted Chiao to illustrate one of them. “24 Minutes to Bedtime!” is a complicated story to render, all taking place within one house yet multiple dimensions of time. Each turn of the page represents a minute closer to Winston’s bedtime, but tonight, with a very special machine, he can time-jump between pages and into adventures he (and his parents) could never predict. You can read it straight through, follow Winston’s time jumps, focus on the journey of his exhausted parents, or create your own logic to follow.

“I do worry sometimes that kids won’t get it, but I think kids are smarter than we give them credit for,” says Chiao. “There are also so many Easter eggs in the illustrations for them. It’s not necessarily about having them understand the story, but just having them enjoy it. If kids are a bit younger, they may not understand where the book is going time-travel-wise, but they’re able to enjoy seeing the mouse come out of the kitchen and eat some cheese, or they might notice that the TV has a fight with the bird clock.”

This is the first picture book that Chiao has illustrated, but she’s uniquely tapped into the mindset of children. After attending Rhode Island School of Design and before starting at IDEO, she worked in toy design. Before any of that, she was a kid filling sketchbook after sketchbook. “You know, as repressed Asian children we don’t talk about our feelings,” she says, “And drawing was a way for me to figure out what I was going through.”

Her work was popular on Tumblr “back in the day,” then in college all her friends got on Instagram. She realized then that she was a private person who didn’t want to share photos of her day to day. Instead, she posted photos of her drawings as she made them. “It was never for a wider audience. It was just to track my drawings and to share with friends.”

Now she has over half a million followers on Instagram. “As soon as the pandemic happened early 2020, my online presence blew up,” she says. “I went from 60,000 followers to 100,000 within a couple months.”

She still didn’t think of illustration as a career path, though. “I never wanted to do illustration full time because I don’t like being told what to do when it’s my personal work, whereas design is not about yourself. It’s solving problems for others, which I thought was really nice. Illustration was purely selfish. I did it for me. But it grew until the point that I realized one day I could be working half as much and still make three times as much money.”

She quit her job in January, and now less than a year later, just launched “24 Minutes to Bedtime!” with Kwan and A24. “The process started November last year,” she shares. “It was before “Everything Everywhere” came out, which is good, because I think I would’ve freaked out.” Kwan invited her to a screening of the film at San Francisco’s Castro Theatre, where she met the cast at an intimate happy hour. “I was thinking, ‘Wow, working on this book led me to meet Michelle Yeoh, which I never would have guessed.’”

Similar to the film, the world of this picture book is one that holds cultural details: a Chinese calendar on the wall, shoes by the door, and house slippers. (“The slippers were because I can’t draw toes so I put slippers on everybody,” Chiao laughs.) But the story transcends cultures. “My struggle with seeing representation is, I want to see Asians in media just being Asian American. I don’t want to be hit over the head with their cultural traditions. I love the movies coming out now, but it’s all still very heavy-handed in many cases. And I want to see an Asian just being a normal person, like how I grew up in Texas.”

This doesn’t mean erasing cultural specificity. Chiao elaborates, “There’s the Chinese calendar on the wall and everyone’s wearing slippers, but you don’t need to explain it and it’s not the point of the story. I figured Daniel and I, you know, we’re both Asian people. I was thinking, when I envision drawing a family home, this is what they have, and it would be weird for me to purposely remove those items from the house.”

Beyond cultural markers, audiences connect with Chiao’s larger body of work for capturing the mood of this time. Her images often feature a person alone in an interior or accompanied by a shadowy figure. Also popular is a pigeon accompanied by the word “fuck.” She seems to be channeling emotions flowing through all of us, but the way she taps into the zeitgeist is accidental. Her work comes from a deeply personal place.

“The process of creating and also the emotional repression of Asian Americans really are the basis of my work, because for a long time, I didn’t have therapy or all those other lovely things we have now. Drawing was the only way I could cope,” Chiao shares. There have been times when she thought she was drawing something obscure and unknowable to others, then upon posting would be surprised by the chorus of comments saying, “I feel this.”

“I think I’m lucky people connect with it, but I’m also kind of embarrassed,” Chiao says. “I’m bipolar and I’ve had people look at my work without knowing that. They’ll come to me and tell me that they’re bipolar, and they see it in the work. So it’s very cool. It’s also a little vulnerable.”

The most impactful art often is the most vulnerable, building a bridge from one person’s isolated experience to another’s. Chiao’s drawings are proof of that week after week. “There’s a saying how the personal is the most universal,” she reflects. “You can’t make something intending it for everyone. But if you make something that’s specifically about you, or for you, there’s a relatability to it on a larger scale.”

As her audience continues to grow, Chiao remains grounded, not taking any of her good fortune for granted. When I tell her it seems her first year as a full-time illustrator is going well, she laughs, “It’s looking good for now. I have no idea what it’s gonna look like in five years though!”If “24 Minutes to Bedtime!” is any indication, the future for Chiao looks bright. To keep following her work, you can find her at @feliciachiao on Instagram, and check out her solo show in New York December 2022 to January 2023. You can also purchase both of Daniel Kwan’s books as a set at A24’s online shop.