Bringing Business Back to Boston’s Chinatown 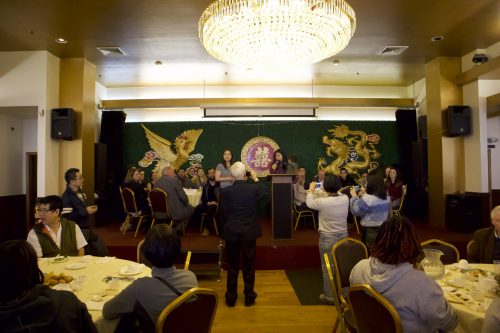 This past February, the Lunar New Year coincided with the outbreak of the coronavirus in China, making international headlines and reigniting old Yellow Peril fears and stereotypes about Chinese food and densely populated areas. As caution spread across the United States, Chinatowns began to feel the impact during an otherwise busy time of year. Wu spent her Lunar New Year visiting local businesses in Boston and was surprised to be seated immediately at the normally busy China Pearl. That’s when she began to notice how few people were walking around Chinatown.

“We’d been hearing from businesses in Chinatown and areas with many Asian American residents that people were staying home, and it was really having an impact,” Wu said. A number of business owners in Boston’s Chinatown voiced concern over the lack of customers, which could impact their ability to pay rising rent costs or might lead to layoffs.

Wu and Liang began planning a dim sum brunch at China Pearl — a family favorite of Wu’s — and word spread via social media and word of mouth. Tickets cost $10 and included admission to the Boston Asian American Film Festival’s screening of “Love Boat Taipei.” Organizers sold out the event with over 400 RSVPs, a line out the door, and a spike in community morale. After the brunch, most folks stayed in Chinatown to get their bubble tea or pastry fix at other local businesses, returning Chinatown to its normal hubbub.

Only a week after sharing their concerns with local news media, Chinatown business owners were telling a much different story, thanks to Wu and Liang. The success of the event inspired Wu and Liang to plan a second dim sum, this time in Liang’s home district. The Asian population in Quincy, Mass., makes up about 30 percent of the city’s population, according to the last census, and it’s spread out across the city instead of being concentrated in one central Chinatown. The second brunch was hosted at China Pearl, which shares the same owners as the restaurant in Boston, and the event packed the house again. A number of area officials attended, including representatives from the mayor’s officials, school board, and other city area councilors.

“Look at the room, it’s really impressive,” Liang said at the second event. “What I thought was really neat for the Boston Chinatown [brunch] is all the businesses are in that area, so once people left, they were able to go get bubble tea or go get a pastry. It was really neat to be able to see that outflow of support in and around that community, and I’m [hoping] for the same trickle effect here.”

Currently, we aren’t hearing news that the illness is going to abate, and it’ll get worse before it gets better. The Centers for Disease Control held a news briefing on the matter at the end of February, warning people to prepare for an outbreak in the U.S. and to take all common-sense precautions: Wash hands regularly, stay home when sick, and get the flu vaccination.

What isn’t recommended: avoiding certain sections of town. Luckily that doesn’t appear to be a problem anymore for Boston, especially after Mayor Marty Walsh toured Chinatown in February to encourage more patronage. His visit to Jade Garden in Boston included a lunch and news conference where he encouraged the city to not overreact.

“The people that are out there saying on social media, being racist towards the Chinatown community and Chinese people in general, I’m asking you to stop,” Walsh said in a local news story. “Enough with that hate mongering. We’re better than that.”

For now, neither Wu nor Liang have plans to organize more brunches, but both would like to see the initiative catch on. For anyone visiting Boston’s Chinatown, Liang says she gets her pastries from Hing Shing Pastry, and Wu recommends stopping by China Pearl for dim sum and getting bubble tea at Tea Do.

“This is what my family does on the weekends to just relax and unwind,” Wu said. “It brings people together around a table where you get to share food, and there’s nothing better than the smells, the sounds, just to bring people together.”