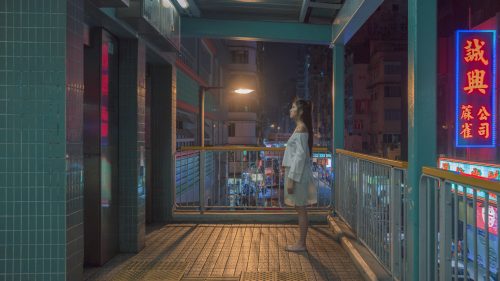 What Sophie Cheung remembered most from primary school in Hong Kong was aspiring to get into the best university possible. From a very young age, the TED Talks producer, filmmaker and photographer of celebrities, like K-pop singer Amber Liu, forced herself to study. Although she went to secondary school in England, she returned to Hong Kong for university to study architecture.

Surrounded by amazing artists, her fellow architecture students were depressed and stressed, studying subjects they had no passion for. Cheung was also friends with a group of medical students who were bored and hated medicine, even though they earned the best grades for their year. She has had friends who have tried to jump off balconies and rooftops, required psychiatric help, and generally exhibited suicidal and depressive behaviors. She found it ridiculous how parental and societal expectations caused a lot of mental illness and stress in the students — but it seemed so normal to them. Her friends didn’t think it was a problem, and because of that, these unaddressed issues caused even more problems.

Inspired by her friends’ stories, Cheung wrote, produced, directed and edited a soon-to-be-released 10-minute film called “The Dragon Dream.” The short film (and its Instagram account) explores how the heavy academic pressure placed on young people in Asian societies can cause serious mental health problems. Cheung hopes to use the film to shine a light on this issue, as well as toxic masculinity.

The Instagram account for “The Dragon Dream”, @thedragondreamfilm, is particularly poignant. The account features a diverse group of Asians of various ages and ethnicities, from South East Asian to South Asian to East Asian countries — often speaking in their native language with English subtitles. As a middle-aged woman, I found one of the posts (unrelated to the movie) about a Chinese American musician named Aaron, and his journey to finally pursue music full time, the most relatable since I, too, took a roundabout path to becoming a writer. He gave me hope and comfort; it is never too late to go after what we want.

Below is an excerpt from our interview with multi-talented, multi-hyphenate creator Sophie Cheung back in November 2019.

The following interview has been edited for brevity and clarity.

VD: How do you hope your film will change or add to the conversation about mental illness, especially within Asian and Asian American communities?
SC: [By] creating a film that showcases something [my friends and fellow students] all go through, [I hope it] will make them feel like they’re not alone. If someone is too shy to talk about it, at least there’s a film out there and there’s a community out there. [Through our] Instagram account, we are sharing real-life stories of different individuals [from] different backgrounds, different Asian societies [to] really help people who are stuck in these kinds of situations. I also have been there, and I know how terrible it feels.

VD: How did you break free? Do you feel like you’ve broken free?
SC: [G]oing through high school, it was [difficult] choosing what to study because I wasn’t really crazy about a particular subject. I kind of wanted to study the arts more, but in Asia, it’s not a subject people think is the best. Being a perfectionist back then, I wanted to do something that would look nice, that would make my parents proud, that my parents would approve of. They suggested architecture, and so I did that.

Once I got into university, that was when I broke free because I achieved what I wanted, what I was aiming for all this time. So I felt free, but I also started to feel really lost. Like, what is life about? [I got] everything that I’ve worked towards, but now I don’t know what to do anymore.

At the same time, there were so many suicides at my school. I remember every semester there would be at least one person who would have killed themselves. A lot of it has to do with academic pressure as well as familial pressure. So that is also one of the main reasons that I wanted to make the film.

VD: You mentioned in the promotional material that you purposely made Sam male. Could you tell us a little bit more about that?
SC: When I was in university, three of my closest friends were all very, very depressed. All three of them are male. And a huge part of the problem, I think, is because they’re guys and they feel like if they tell people how they truly feel, it’s going to look really embarrassing for them. These guys don’t know that they feel depressed. They only tell [certain close female friends] because they feel it’s too weak to tell [their] guy friends.

A social behavior like that [is] very toxic for guys, especially many students in a situation like that. And especially in Asian culture, the man is supposed to be the head of the family and they’re not supposed to talk about their emotions. This causes a lot of pressure that builds up, and then this buildup of pressure is probably what caused some of my friends to attempt suicide. That’s why I think it’s so important to address. It’s completely fine and normal to be depressed at a pressure point in your life.

VD: I heard you say that your parents weren’t tiger parents and that they were sending your movie to their friends so that others could see it. Were your parents always this way, or was that something you had to train them to be?
SC: I remember when I was young, my mom would send me to a bunch of activities and courses to take, like art classes. But despite that, in high school she told me I [was] not allowed to study art. So I guess in a sense, they are kind of traditional. Now that I’ve finished architecture school, they know I want to pursue photography and film. They do support it, [which] I very, very appreciate.

VD: Is that something you always felt, or do you think that that was gradual? Is it because you went to architecture school and you didn’t like it?
SC: I think they just wanted me to have a backup. But once I’ve achieved this backup, they’re fine with whatever. I think that’s their attitude because before that, they really wanted me to do medicine or architecture or engineering, which is very typical. When I was in university, because they knew that I got in, they were very relaxed. The last year of university, my parents could tell that I was always doing photography. I did my schoolwork, but I wasn’t the best student or anything.

My dad would actually offer to skip school with me for a week to go traveling in India so that we could both take some pictures together. My dad also loves photography [and he] is very adventurous, and I think I also have that side from him. So in a way, my parents are traditional, but they’re not traditional.

In regards to parents, we all live in a new generation now. There are so many other tools helping artists to succeed nowadays. Don’t put your dreams onto your children, because they’re not you; they’re their own person.

VD: In the media kit, you mentioned using different colors: from yellow to blue and then to white to represent different mental states and ideas. Could you talk about the process behind making a film? How much of it do you want people to pick up, and how much do you want to explain to people?
SC: This is my first [film] ever, and I didn’t go to film school. I went to photography and video school, and it’s very different from filmmaking. For example, doing photography, it’s a different  mindset. In a way it’s easier, less complex… whereas in film, there are all these things you have to consider. In photography, you’re taking one picture. If you have everything set up, it takes you a minute to finish that shot.

With film, I remember on the first day trying to film this first scene. It took us at least two hours because there would be a random sound in the middle that would make us start again, or all these things that would happen.

I wrote the script. I basically produced it and I also decided to shoot it. I didn’t know what I was getting into. And the first draft was so incredibly bad, it was unwatchable. My friends who could actually watch the whole thing through were very, very kind. We had like 20 draws before it went to anything similar to the final draft. In the middle, we had to go back and reshoot some things to make the story better.

It’s definitely teamwork. It’s really great to have the whole team working with you all the time. We started filming in late March and we finished mid-April. For the whole of May, I was editing. I remember the first [draft] was 30 minutes of just crap. Finally, we cut it down to 10 minutes where it finally made sense.

We’ve achieved something because I would show it to some of my friends afterwards, and they would literally be in the same situation. I have friends right now who are working in medical school, and they’re, like, dying every week. And they tell me, “Thank you for showing me this. I understand how it feels.”

I think people’s reactions really made me happy that I am able to make something like this — especially our Instagram story posts. In some ways, that has become a second part to this project. At first, we were thinking, “Who’s going to watch all this?” But it turns out some of our friends and their friends actually follow us and actually watch it.

We went to a mental health panel organized by ACN (Asian Creative Network) [at NYU] because we know that it’s something similar to what we’re talking about. We didn’t realize so many people in the room already knew about [us] and were following us on Instagram — which was really incredible. Even Kevin Kwan, the writer of “Crazy Rich Asians,” follows us.

VD: You’re so successful in so many areas, like photography. You do photo shoots for models and albums. You did architecture and produced TED Talks — and now you’re a filmmaker. How do you decide what’s next? How do you decide what to do when you’re good at so many things?
SC: I don’t think I’m good at so many things. I’m very thankful there’s a team of people who are willing to work with me. For example, there’s a bunch of us who are in it together who helped produce the TED Talks. And because of that, we met so many incredible inspiring speakers.

With the photoshoots, I’m very thankful that in the beginning, people would give me a chance to photograph them. Then they would recommend their friends. And then, that [kept] going. With the film, I’m so thankful that my friends would even come and support this because they had no idea how terrible this might turn out. I’m just very grateful that people give me the chance.

When I was in university — because of how adventurous my dad is — I would decide [things] like, I’m going to go backpacking in Europe by myself [this summer]. I don’t want to waste my time; I want to go out there and make memories. I want to create things that other people would enjoy, things that could potentially talk to people. I write down goals that I want to achieve. Sometimes I choose and sometimes I don’t, and if I don’t — that’s okay. I just push it to the next one.