Home Our VoicesGwen, Your Sh– is Bananas

Gwen, Your Sh– is Bananas

Content warning: This article contains references to suicide. If you or someone you know needs assistance, please, contact your physician, go to your local ER, or call the National Suicide Prevention Lifeline at 800-273-TALK (8255), or message the Crisis Text Line at 741741. Both programs provide free, confidential support 24/7.

She said it best, “This sh– is bananas.” Gwen Stefani fed the flames of a longstanding debate by claiming to be Japanese in an Allure interview last week. She defended that claim and the use of Harajuku motifs and imagery in her 2004 music record and subsequent products, including an award-winning fragrance and children’s clothing line.

Scholars and everyday people alike wrangle over the line between cultural appropriation and appreciation, but what is more important to understand is how white people gain the ability to pick and choose aspects of our culture and associated stereotypes as it suits them in order to advance their social status, and in Stefani’s case, material gain.

While Stefani, who is Italian and Irish, was running around thinking she was Japanese and capitalizing off of a culture that isn’t hers but simply has an appreciation for, I was an Asian American teen in white suburbia trying to belong — at once running away from my “Asianness” and yet simultaneously placed in a stifling box.

There was a high school photo that circulated on Facebook for years that haunts me. It’s a spur-of-the-moment group photo of Asian students at the school — we were surprised that so many of us (“many” meaning five) were taking the same anatomy class. In the middle of the photo, however, is a blue-eyed, blond-haired boy who is not Asian. He is squinting his eyes and throwing up a peace sign like the rest of the group, invited to be in the photo because he was “basically Asian.”

Being actually Asian (and I don’t recall if I even made the cut for the photo), what stuck with me was the ease with which that male student assumed my identity, completely contrary to my actual experience of being Chinese Filipino.

At the height of Stefani’s Harajuku era, my teenage self felt like being an Asian American was like being forced to wear a skin that just didn’t fit right. There was the notion that I had to be polite and quiet. (I enjoyed being an introvert but had a deep desire to express myself through other outlets.) The preconception that I was smart. (I was an average student.) The racialized sexualization. (I was once asked to dress “school-girl like” for a sexual encounter.) Furthermore, in my Asian family and communities — not being Chinese or Filipino enough. (Family members used to call me a “banana,” but other pejorative terms used to describe those who were “white on the inside” include coconut and Twinkie.)

Both the male student from the Facebook photo and Stefani’s actions harbor no malicious intent and yet are still harmful because they reproduce the dominant narratives of what it means to be Asian in America.

The male student posing as Asian bolstered his studious, nice-guy image and at the same time, defined — once again by white American standards — what Asians should be like and act like: smart, obedient, and under the radar.

There are many critiques of Stefani’s Harajuku era. One particular aspect in which Stefani reinforced Asian stereotypes was her use of the Harajuku dolls — her four backup dancers she “named” Love, Angel, Music, and Baby. The dolls’ sexually-charged performances, orchestrated by Stefani, transformed the meaning of Harajuku, a district in Tokyo known for its colorful and vibrant fashion scene. At the same time, Stefani adds yet another page to our country’s history of fetishization of Asian American women.

To appropriate is to take something for one’s own use. It’s a popular accusation but what is actually appropriated — whether that’s the fashion of Harajuku or being considered of Asian descent — is not where the harm lies.

White American tourists often share their experiences of dressing up in hanboks while visiting Korea and how surprised they are when the locals don’t criticize them or accuse them of cultural appropriation, when in the United States, the very same actions would draw ire. The history and context in which Asian Americans live and exist is the reason why these actions are painful and harmful — some report that Japanese people are hardly affected by Stefani’s comments.

The issue at hand in both Stefani’s case and the student’s is that they have the power to not only capitalize and receive social and material gain from their actions but also that their actions influence the lived experiences of Asian Americans — without having to deal with the racial traumas that come with being a person of color in a white-dominated culture.

The leading cause of death for Asian American youth is suicide. I bring this up because the urge to take one’s own life is driven by that person’s determination of their value. Admittedly, growing up, I was not taught the value of being Asian American. I had no role models or mentors who looked like me — and consequently, had moments where I too felt suicidal because I didn’t fit in and felt like I had no place. (I also lived in the same time and place as the cluster of Palo Alto high school student suicides from 2009 to 2015 — many of which were committed by Asian students.)

Every day, white people pick and choose what they value from my culture to use for their own gain instead of valuing the people that we are. As a child I remember, I was embarrassed by the food my mother took precious care to pack from home — yet those same foods today are in fad. As a teenager, true to Filipino culture, I longed to be in the spotlight and sing my heart out, but that passion wasn’t part of the script that white society determined for people like me.

It took a while but I’ve grown into a proud Asian American woman. I was fortunate to receive a rigorous education in Asian American history, movements, and historical figures. I have the ability and privilege to say that I don’t need to be your model minority. But this is not the case for all Asian Americans today.

The real “bananas” here is the focusing on the debates about where the line is drawn or the infractions of white people. The white person is gaining cultural capital whether through appreciation or appropriation.

As Asian Americans, let’s take a minute to see that being valued by white society does not define who we are. Every day, I work against those stereotypes — as a mother, as a friend, as a mentor — and through diversity and representation efforts that work to heal the racial trauma that has built up for centuries. It’s a tall order but one that needs our energy and engagement. 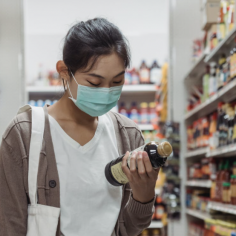 The Asian snack food trend, both long-awaited and troubling, has paved the way for misinformation, cultural...