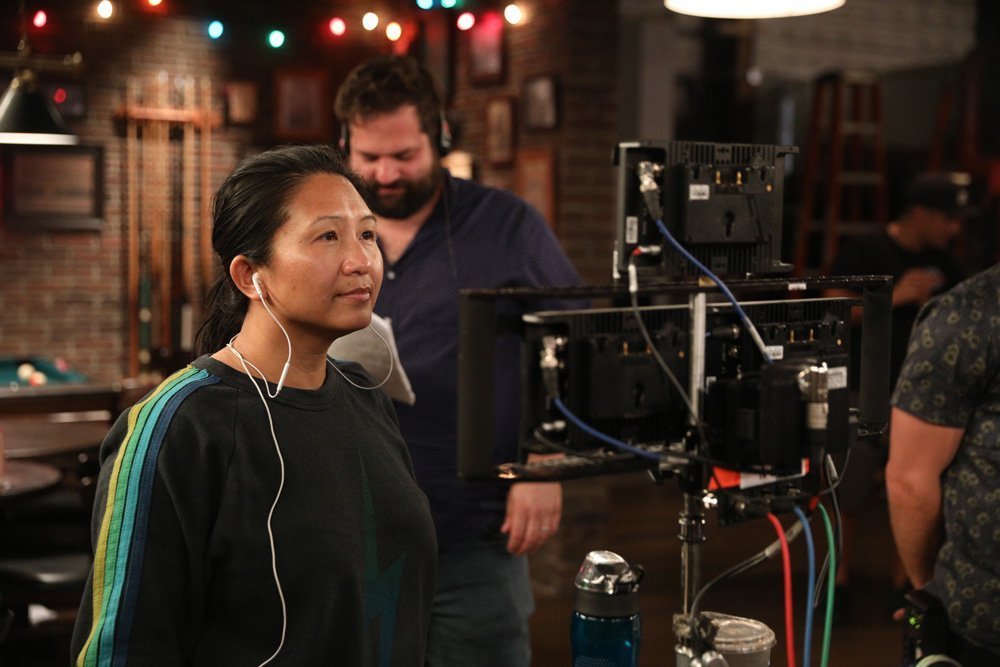 A woman of many talents including writing and directing comedy, Kim Nguyen does it all. Nguyen is a powerhouse behind titles you’ve probably heard of (and if you haven’t, I’m sorry, but where have you been?). She’s worked on “Fresh Off the Boat” and directed award-winning commercial works with Kevin Hart, Amy Schumer, Bill Hader and Tracy Ellis Ross — just to name a few. Recently, as part of NBC’s new Female Forward program which gives female directors a chance to shadow and direct a show on NBC, Nguyen directed an episode on the current season of “Brooklyn Nine-Nine.”

A fountain of creativity, integrity and energy, Nguyen is a director like no other — quite literally. I mean, name another Vietnamese female director in Hollywood; I’ll wait. Her comedy productions score high on the laughter scale while being critically attuned to racial and gender diversity.

Despite all the projects she has in the works, Nguyen took the time to clue me in on what it’s like being a female director, how she got her start, and her thoughts on the future of Asian representation.

The following excerpt has been edited for clarity and brevity.

KP: I heard that you had a lot of different jobs on your way to directing, like working at The Gap, making hoagies and even being a mascot. I was wondering if you could talk about your intention behind all that.
KN: I’ve always looked even at a pretty early age to have interesting experiences. When I was a mascot, that was for the International House of Pancakes and I was a pancake. I really wanted to do that because I thought it would be more interesting and more lucrative than being a waitress at the time, and it was in some cases. There’s something pretty interesting about getting into that giant costume. I wanted to have that experience. I’ve always tried to look for different jobs that are interesting. I mean, going to The Gap was essentially learning how to fold sweaters perfectly. I usually just try to go look for things that are pretty different. I’m pretty experience-driven versus other things when looking for work.

KP: Did you always know you wanted to be a writer? Or did that just kind of fall into place?
KN: I was very much into writing. I was a writer at The Onion, and I’ve always enjoyed creative writing. I was working at MTV as one of their in-house writers, being on set and working in production. A lot of people encouraged me to think about directing. I realized that I had a pretty strong point of view on a lot of things, and I wanted to be fully immersed in it. But I found directing via writing and that I’ve carried through to today. One of the things I love most about directing is working in collaboration with writers. I really enjoy [working with] writers and delving into their stories. I’ve been a writer, so I know what it feels like to really want to honor that story and that writing. I take that responsibility with me when I’m directing.

KP: You’re definitely someone who has a lot of jobs under their belt, but also someone who has worked in a number of formats: as a director in TV, documentaries, short films, etc. A lot of your work still falls within the theme of social justice or immigration, and I was wondering what it’s like to direct something so progressive and socially urgent.
KN: I feel very alive when I’m working on something that is meaningful. I am a big believer in not just doing work, but doing work that also gives back. So I’ve purposely gone out of my way to find projects where that can be served. I did a short film with Wyclef Jean that explored immigration. Last year, I did a Make-A-Wish foundation campaign with John Cena. These are things I’m interested in. I look for that when I’m directing because I feel that it’s not just about the directing but also how I feel about it as a person and my value system.

KP: [When] directing things like comedy like the “Brooklyn Nine-Nine” episode or “Fresh Off the Boat,” … the cast is so diverse and the comedy really doesn’t shy away from that. I mean, they do talk about issues of race and sexuality. How do you see comedy’s relationship to issues of race?
KN: I think it’s really important, and we’re having a lot of conversations about it via these shows. I mean obviously “Fresh off the Boat” was a great experience because we’re talking about the experience of so many people being immigrants, including myself and my family. “Brooklyn Nine-Nine”was incredibly special because that show has such a diverse cast, and as you were saying, it’s not that it’s necessarily focusing on that, it’s just telling these stories of these people who come from such different areas and backgrounds. I would also say to that point, diversity is really great on that show. The cast, the crew, just in terms of the different story lines. I really felt it was fun to direct, obviously, but it also felt meaningful to me.

There’s these great characters on the show, you have Andre Braugher and Terry Crews, two African American men who have these great strong comedic roles and Stephanie [Beatriz] and Melissa [Fumero] too. It’s a great cast, packed with diversity, but you’re not necessarily thinking about that. You’re thinking about their stories and their lives. I think that’s very much how many of us feel; also as someone who is a woman of color, that’s how I feel too. This is my story. While I am Vietnamese and I am an immigrant, I’m not necessarily leading with that all the time. Does that make sense?

KP: Yeah, it does. While we’re on the topic of “Brooklyn Nine-Nine,” can I ask what working with them was like for you?
KN: It was awesome. It was so much fun to work with them. Andy [Samberg] is really funny and fun. He sets a great tone in terms of the scenes. They move so fast. The cast is very collaborative, warm and welcoming. It’s such a great ensemble, and they’re so skilled that it was truly a joy working with them. It makes everything [especially] the workday just go by so nicely.

KP: You also mentioned that as a woman of color, your experience differs from your male counterparts. Could you talk about your experience in this industry as a woman of color?
KN: I think comedy, for many years, has been really dominated by males — and white males at that. And now there’s a shift and things are moving and becoming more inclusive. Female Forward is a huge part of that. We’re seeing that shift, but I would say that for a very long time, many of the directing slots have been in consideration for males. I don’t think females were really a large part of that consideration, let alone hiring practices and processes until more recently.

KP: In your interview with Bird, you also touched on a particular gender and racial experience, calling yourself ‘the Asian Lady,’ which to me seems like an embrace of how there aren’t that many people who look like you in the industry. How do you turn that singularity into something positive?
KN: I think it’s always something positive, because when I go on set and I have so many people coming up to me either shyly or in a really forward manner just saying how great it is to be working with me or how rare it is to see a woman of color directing comedy. That really means something. I know it means something to me, but also it’s important when I’m seeing how much it means to other people, and particularly other women. I’ve definitely had women come up to me and say [things like] working with or watching you has made me realize I can try and do this, too, or that somebody’s who’s a woman of color can also do comedy. Or, I’m not used to seeing a woman, or a woman of color, direct. I get a lot of incredibly positive feedback about that and I’m glad that things are shifting.

I did that article a few years ago. [Now] there’s more of a representation but certainly not enough. I’m very excited to be a part of this momentum and to help build it. It’s going to be our responsibility, too. Those of us who are moving forward and are building our careers in episodes and features also continue that and bring more women and more women of color through the pipeline.

KP: I definitely feel that there’s been a lot more Asian representation in media lately especially with directors like Lulu Wang (“The Farewell”) and Bong Joon Ho (“Parasite”). How do you see that and the future of Asian filmmaking evolving?
KN: It was a really great year in terms of filmmaking. It was wonderful to see the representation and to see those accolades and to see those filmmakers getting the space and the respect that they deserve. It’s a great time to be a director.

KP: It also occurred to me that in being an Asian female director, there are so many stereotypes of Asian women being more docile or meek, and so I was thinking about how that complicates or creates greater empowerment in being at the head of the ship as a director.
KN: I love it. I think that’s one of those situations that we’re talking about where I just am who I am. I’ve never felt docile or meek, so people aren’t treating me that way. When you’re directing, you’ve got to have a point of view. You’re bringing a vision and that’s a bold space to be in.

KP: I also thought I heard you worked on a project with Usher? I have to know what that was like.
KN: That was something I did for MTV. He’s fantastic. Directing music is not terribly dissimilar than the other medium per se, but it’s about beats and a sort of flow and how things come together. But I think what was special was that I did that earlier on in my career when I was at MTV, but he is so iconic. He truly is one of the fittest people I have ever met in my entire life. I literally did not even eat any breakfast burritos on that shoot.

KP: Well, my last question is something I like to ask people here in Michigan: What is your favorite Asian food or snack?
KN: Oh, hands down: kimchi.

Check out Nguyen’s newest episode of Brooklyn Nine-Nine “Trying” on NBC, which aired on Mar. 5, 2020. For updates on the best kimchi in L.A and Nguyen’s other projects coming out soon, check out her website!