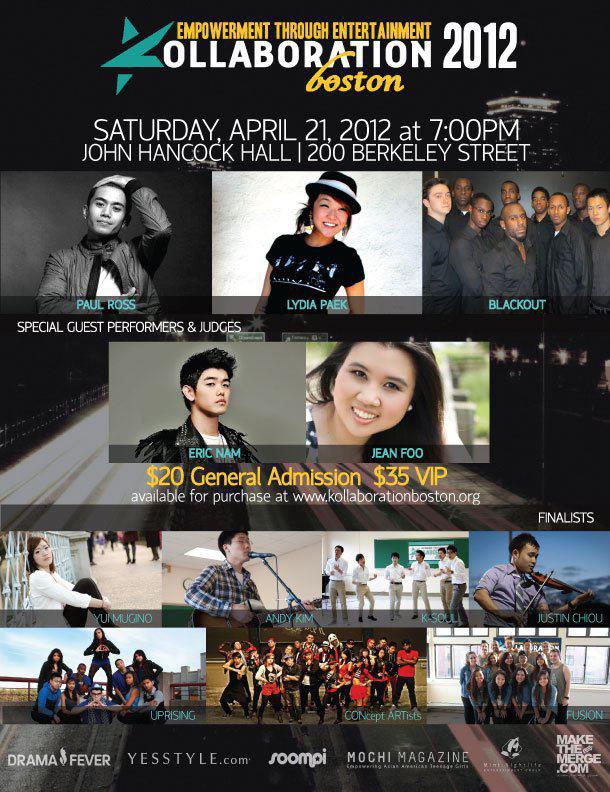 Here’s a deeper look at the seven talented finalists picked for this year’s on-stage Kollaboration Boston showdown.
1. Violinist Justin Chiou is a full-time Northeastern University student who uses only resources such as YouTube to produce covers ranging from J. Holiday’s Suffocate to Wiz Khalifa’s Black & Yellow. He has a tough job to fulfill convincing the Kolloboration show audience that the instrument so many Asian American kids are unhappily forced to learn can transform the way we listen to hip-hop music.
2. Founded by John Tesoriero and Brandon Moye, UPrising is the newest addition to the Boston College dance team community. The crew is of the New Age/New Style dance genre and utilizes visuals and stunts from parkour and freerunning. Last month, they won first place at Boston College’s biggest dance event of the year, the ALC Showdown, and hopefully can keep up the momentum for Kollaboration.
3. CONcept ARTists (aka ConArt) has won several competitions in the Boston/NE area, such as World of Dance Boston 2011 and Prelude East Coast Urban Dance Competition 2011. This Boston hip-hop group descended from an all-male dance crew, Side Project, so they’ll have to prove they aren’t just another offshoot dance crew.
4. Unlike the others, Fusion is no newcomer to the dance scene. Boston University’s leading hip-hop dance troupe was established in 1993. Fusion strives to create a learning environment for its members by hosting ELEMENTS for the past two years, which is now one of the most recognized dance competitions on the East Coast. It will be interesting to see how these dance veterans compete with the other two newer groups.
5. Not a fan of dance? You may be floored by the inspiring vocal talent at this year’s show.  Representing Boston University, K-Soul is an a capella group who had the honor of opening for international music artist Clara Chung on her Shakin’ Off Silence Boston tour stop last year. This all-male singing spectacular has become popular with local students by entertaining crowds with R&B, pop, oldies, and contemporary music mash-ups.
6. Andy Kim is a recent Brown University grad and identifies himself as a “folk musician.” Andy draws inspiration from folk bands Fleet Foxes and Bon Iver. Folk music is not mainstream, so it’s up to Andy to captivate the audience at the show with his budding acoustic guitar and vocal talent.
7. Japan-born and Hong-Kong-raised Yui Mugino is a Renaissance woman. She attends the Berklee College of Music studying writing, arrangement, and music production, while aspiring to become a professional musician and singer/songwriter. With her knowledge of so many different aspects of music and because she is the only female vocalist, I admit I’m biased when I say that I can’t wait to see what she brings to the stage on competition day.
Check out the vocal finalists’ Kollaboration music video cover, set to Beyonce’s “Love on Top.” And here are all of the dance finalists and their original choreography in this Kollaboration music video, set to “Heartbeat” (DJ JesseJess remix) and featuring fellow finalist, violinist Justin Chiou.
If you’re interested in attending, tickets for Kollaboration Boston can be purchased here. Who do you think has what it takes to win the $1000 grand prize?