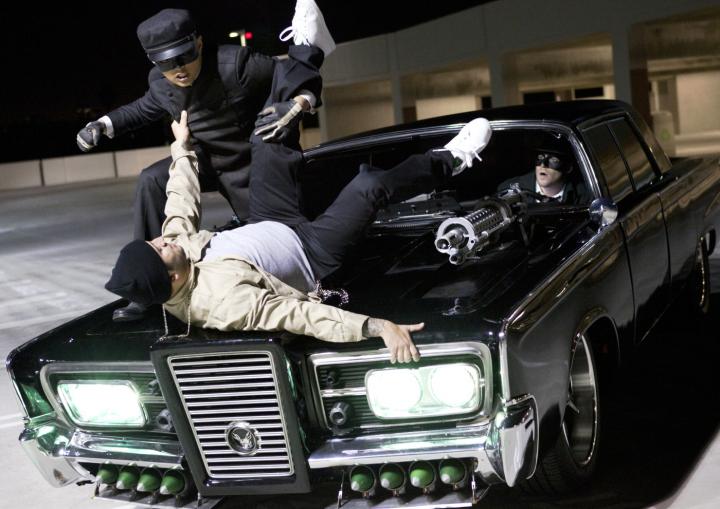 In his debut Hollywood movie, “The Green Hornet,” Taiwanese singer-songwriter Jay Chou stars as the superhero sidekick, complete with martial arts moves and amazing engineering skills. Based on the classic television/radio series, this movie is about rich party boy Britt Reid (Seth Rogen) whose father suddenly dies and leaves his son a media empire. By a fortuitous accident, Britt discovers Kato (Jay Chou) has some very useful skills and decides to start a career kicking some serious criminal butt. You would think Jay Chou would get swallowed up in the background, given his lack of English-speaking skills, and it being his first time starring in an American action/comedy role. So it was most surprising to me as I watched the film and realized that he doesn’t take a backseat to anyone—in fact, it’s Kato’s reactions and responses to Britt’s shenanigans that drive the movie.

When Britt tries to steal Kato’s love interest, for instance, Kato launches a fist at Britt, pounds the cupboard behind him, and says (and I loosely quote), “If you ever ask me to make you coffee again, I will beat the s&#! out of you!” Though he looks serious, the scene is funny because one, Britt’s facial reaction to this sudden act of aggression from his “coffee-maker” is priceless, and two, it’s an entirely new image for Jay Chou. Compared to the boyish, soft-spoken romantic he played in the Taiwanese film, “Secret” four years ago, you’ll be amazed at the difference. Chou’s versatility makes his character Kato an instant hit with long-time fans, while genuineness and a bold refusal to be labeled the underdog attracts new ones.

In an interview with Chou in our latest issue, he expressed concerns about how it was hard “to try to be just as funny as” the famous jokester Seth Rogen, as he candidly admitted, “I’m not a funny person.” He should put those doubts to rest though, because this movie convinces us that Jay Chou is one funny guy. And considering how the Green Hornet topped box office sales this weekend at #1, grossing an estimated $34 million in the U.S. and the $16.1 million overseas, he needn’t worry about any lack of talent, comedic or otherwise.