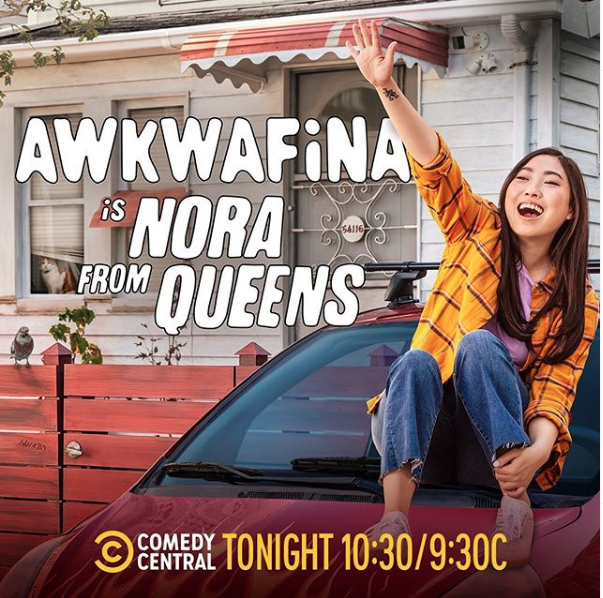 Awkwafina, a.k.a Nora Lum, made history this month as the first Asian American to win a Golden Globe for Best Actress in a Motion Picture Musical or Comedy. Although the headlines have since been taken over by the Oscars’ snub in failing to nominate her or The Farewell for any of its Academy Awards, Awkwafina wants us to focus on the positive. Audiences have the opportunity to support her — and the importance of representation — by tuning in to the premiere of her Comedy Central show “Awkwafina is Nora from Queens” on Wednesday, Jan. 22, 2020.

After catapulting onto the scene when her rap music video “My Vag” blew up on the internet in 2012, she has insisted, “I make it very clear; I don’t ever go out for auditions where I feel like I’m making a minstrel out of our people.”

This must have been challenging as a newcomer in the biz, but it’s 100% believable in her case. After all, she lost her day job when she released her video. The multi-talented artist has talked about difficulties being taken seriously at auditions early on in her career because of her online persona, yet she never wavered in staying true to herself.

To me, she is like the rebellious sister I wish I had. She is immensely relatable in a way no other star has been before for a multitude of personal and specific reasons. Not only did she grow up in both Chinese and Korean cultures like I did, but her family also owned a Chinese restaurant. She endearingly chose the name “Awkwafina” in her teens because awkward is her default state of being. She revealed to Vogue in 2018, “When I was growing up, I was never normal. There was a group of Asian kids I called ‘the cool Asians’… I was not [one]. Because I loved ‘Rent.’ I loved yelling at pigeons.”

In the same interview, she said, “I was fresh out of college, and I just wanted to test the waters. All of my friends, they had boyfriends… The pressure was on to really prove to myself that I could have a boyfriend.” She went on to narrate how her first relationship originated from a blind date. Later, he disapproved of her interests and expected her to behave differently, to only follow his intellectual tastes. “It was a mutual ghosting… I just enjoyed and realized that I’m enough, I’m worth it, and if you can’t get with that, then bye…. I’d much rather be at home alone, naked, watching ‘Beverly Hills Chihuahua 3,” giving my cat a haircut.”

As a late bloomer who also didn’t date until after college or learn lessons from relationships until much later, I’m inspired by Awkwafina’s meteoric rise to fame from humble beginnings. She is a gleaming example that you don’t have to be popular and perfect to be seen as an Asian woman. She is an atypical star, one who was not plucked out of obscurity for her conformity to the glossy Western standards of beauty or the often stifling Eastern ones. Her beauty is her own. She is unapologetic and fierce while her talent is undeniable.

When Awkwafina takes the screen, especially in a role like Billi in “The Farewell,” it makes me feel seen in a way like never before. In the film, she expertly portrays the tightrope we often walk as Asian Americans from immigrant families, struggling to respect the will of loved ones whose philosophy on life contrasts so starkly to our more American ones.

Awkwafina has stolen scenes in “Oceans 8” and “Crazy Rich Asians,” capturing the hearts of audience members in roles that are arguably as far removed from tired Hollywood tropes as possible. She’s lent her star power to “Jumanji: The Next Level” and will be joining the Marvel Universe in the highly-anticipated “Shang-Chi and the Legend of the Ten Rings.”

The smashing reception of recent works conveying very specific narratives — like those in the films “The Farewell,” “Crazy Rich Asians,” and the Hulu series “Ramy” — demonstrates that entertainment no longer has to be monolithic in order to gain mass appeal.

In “Awkwafina is Nora from Queens,” the multi-talented star plays a fictionalized version of herself. The show, which co-stars BD Wong, Lori Tan Chinn, and Bowen Yang, is receiving glowing reviews. Awkwafina will again draw from her relationship with her grandmother, who raised her after her mother died when she was 4 years old. “She is my best friend,” the 31-year-old actress has proudly declared about her grandmother. “Nora from Queens” looks to be another labor of love, which will be further propelled by Awkwafina’s recent Golden Globe win.

The show’s premiere will be timely for another reason. ABC’s sitcom “Fresh Off the Boat” will be concluding in February, after airing over 100 episodes since its debut in 2015. Based on Eddie Huang’s memoir of the same name, it was the first network show with an Asian American cast since Margaret Cho’s 1994 historic “All-American Girl.”For many, the “Fresh Off the Boat”sitcom was a milestone, and not just because it was the first time younger Asian Americans saw themselves represented on prime time television. The show and its six seasons of success launched the careers of Constance Wu, Randall Park, and Ali Wong, to name a few, and marked the significance and permanence of Asian Americans in popular culture.

In many households like my own, there will be a celebration as Awkwafina carries on the torch of Asian American representation on the American small screen — and we look forward to the day when there will be more than one representative show on air at the same time.

The Sweet Life of Brenda Song