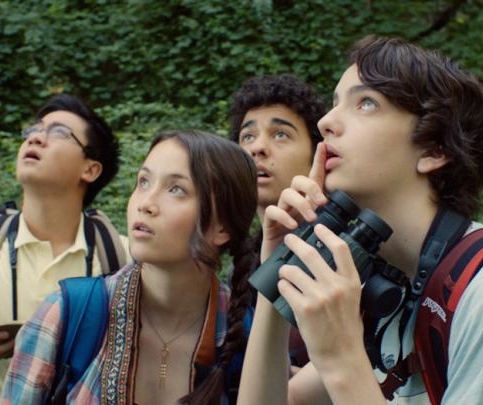 After spotting a member of an allegedly extinct species, 15-year-old David goes on a journey with his cohort of bird-watching pals to find this elusive duck in “A Birder’s Guide to Everything.” The coming-of-age indie comedy and Tribeca Film Festival favorite features Ben Kingsley and a cast of talented teens, including “The Bling Ring” star Katie Chang (who also happens to be our Winter 2012 cover girl!). Here, Chang shares her experience on set of the film — and a few reasons to catch it in theaters starting this Friday.

I filmed “A Birder’s Guide to Everything” three months after I finished my first movie, “The Bling Ring.” When I got on set, I immediately knew it would be a different experience. We filmed the movie over four weeks in the woods of Westchester, New York. The entire crew, including us cast members, lived in a small Holiday Inn — it was nothing like filming “The Bling Ring,” where I lived in an apartment on Beverly Boulevard and worked all over Los Angeles.

But I loved filming “Birder’s” just as much as my first film. Making a movie in the woods is like going to summer camp. It was an incredible bonding experience and I relished every second of it. Working on “Birder’s” also helped me grow as an actress because it allowed me to practice intense character development. I am so proud of this film and hope many people either download it on iTunes or go and see it in theaters!

Here are five reasons why you should go see “A Birder’s Guide to Everything”: