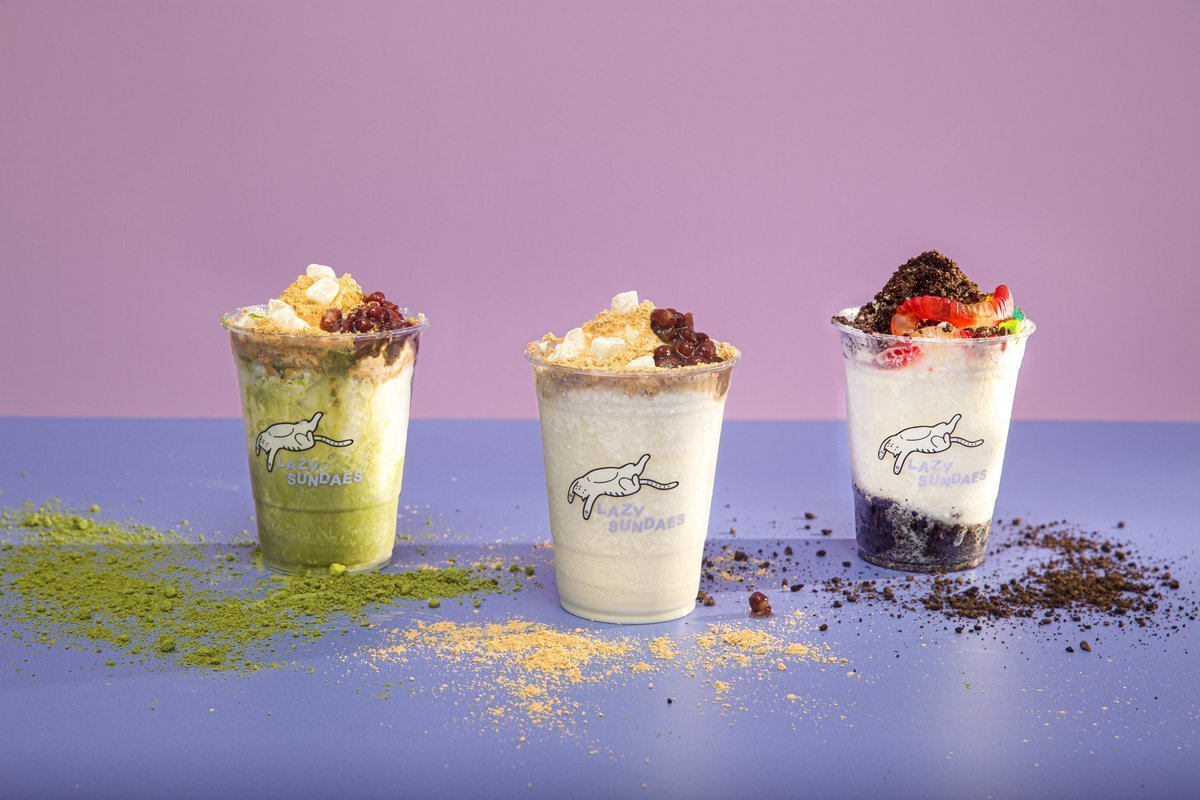 Food, design, fashion, and cute animals: when Tammy Na and Amber Luan first met at Boston University in 2008, they bonded over these interests and decided they would eventually do “something” together. Over ten years later, that “something” is now Lazy Sundaes, a bubble tea and bingsoo shop with a dreamy pastel aesthetic and an adorable, supine feline as its mascot. Finding the silver linings in the COVID-19 pandemic, Na and Luan opened three locations of Lazy Sundaes in New York City this past October. They recently sat down with Mochi to share how they’re fueled by childhood nostalgia, big dreams, dedication to their team, and, of course, sugar highs.

“All the stars aligned for us at the right time,” says Na.

After graduation, they were both drawn to New York’s glittery fashion scene and got closer as they brainstormed ways to combine their collective interests. In 2015, Na brought the Boba Guys brand — a San Francisco-based bubble tea shop — to New York as a pop-up shop “in a really random office building in [the Financial District].” She worked hard to get the word out through social media, and the new bubble tea concept quickly gained momentum. Hundreds of people lined up around the corner to get a taste, and within the first year and half, Na opened three brick-and-mortar stores as the majority shareholder. In January of last year, Na and her husband moved to London for his job, expecting to travel back and forth easily. Meanwhile, Na needed a General Manager. She reached out to Luan, who was eager to apply her own experience to the food industry, and Luan expected Na to physically be by her side during the training period.

However, as we all know, 2020 had something different in mind. “We spent a week together introducing Amber to the team. I came to London for a little bit,” Na explains. “I saw her again in early March, and I was like, ‘Okay, I’ll be back in two weeks.’” She laughs as she adds, “And I never got to go back until the end of September!”

During the first phase of the COVID-19 pandemic, as the number of cases rose, New York City began to shut down and social distancing restrictions shuttered many small businesses. Physically separated, Na and Luan learned how to trust each other fully and “over-communicated” feelings and expectations through Zoom meetings and Hangout calls. “It was a really good exercise in crisis management,” says Luan. “Having something so out of your control thrown into your face. A new job. A team that doesn’t know you… And then making decisions [regarding] safety. Working through what the right decision is.”

It was also during this time that Na and Luan revisited their old conversations and decided it was time to finally start something of their own. They parted ways with Boba Guys on friendly terms.

Luan explains, “We had two months where the store was closed down. We had a lot of time to think about what we also wanted as leaders and what our aspirations were too, revolving [around] conversations we had over the last ten or so years. The pandemic brought us closer together and made us realize we can work together in a crisis.”

Perusing through the mouthwatering menu Na and Luan curated for the new business instantly evokes a certain Asian American nostalgia. There are classic boba and pat bingsoo flavors, but also innovative ones like White Chocolate Matcha Latte and White Peach White tea (reminiscent of Japanese peach candies), as well as Matcha Bingsoo and Dirt Oreo Bingsoo with oat milk shaved ice. It’s simplistic to say this menu marries the flavors of Na’s Korean and Luan’s Taiwanese childhoods. In reality, both of their heritages, and therefore these flavors, have been filtered through their many rich, multinational and multicultural (Taiwan, Korea, and the States, yes, but also Canada, New Zealand, and England) experiences.

Na muses, “You can grow up literally across the world, in different hemispheres, but [to be able to] share that similar experience through food is incredible.”

“The joy that [food] brought me as a kid ties in perfectly into our brand ethos,” adds Luan, “bringing back these treats that you grew up having and playing around with it.”

One sip or bite, and you can certainly taste the fun they had, experimenting with flavors on sugar highs at the Clinton Street location during the construction period. Luan fondly reminisces having “too much matcha caffeine at 10 pm, riffing, and playing around with things. We were a little bit delirious.”

One particular memory that stands out to them is experimenting with different cookies n’ cream bingsoo flavors. To Na’s confusion, Luan took the first spoonful and said, “This tastes like dirt.” By dirt, she meant the classic American Oreo treat, one of Luan’s favorites. She explains, “I hadn’t had a flavor like that in so long.” Of course, they added gummy worms to get the full “dirt” effect!

Another feature that makes Lazy Sundaes’ dessert extra unique (and made this writer dance with joy) is that the menu options can be made dairy-free. In place of regular shaved ice or regular milk, the duo found that oat milk snow had a creamier and fluffier texture. Condensed milk can also be swapped out for coconut condensed milk which “adds an extra layer of complexity and nuttiness,” Na says, “It’s kind of a running joke in the Asian community that Lactaid is a part of our regular diet. [It goes] back to being able to share flavors with everyone!”

Now that we have officially entered the new year, there is renewed hope and determination to usher in a better world. First and foremost, Na and Luan are dedicated to supporting and providing jobs for their team, who have been with them since the Boba Guys days. Luan also stresses the need to get creative in order to “keep the momentum going,” from cute merchandise to at-home boba kits. As they continue to partner with other women-owned businesses, they are excited to expand their menu to its full potential and share even more scrumptious flavors with customers. They are also striving for more sustainable practices to reduce their plastic consumption. After testing several eco-friendly straw options, Na says they have found the perfect paper straw that won’t get soggy, “even after sitting in your cup for five to six hours!” These are just some of the small decisions necessary to keep a business thriving these days.

“In New York, a lot of businesses are having a rough time, especially now because it’s freezing outside and cases are slowly rising again,” says Na. “But the city has been incredible at supporting small businesses. If we can continue that, that would be amazing. […] We can’t wait to see the city back to normal.”

In 2021, let’s continue to support women-owned, minority-owned small businesses, and #treatyoself to some sweet treats while we’re at it!

Check out Lazy Sundaes’ delectable menu online. You can visit Lazy Sundaes at their Lower East Side, Greenwich Village, and Canal Street Market* locations or order delivery. You can also follow Lazy Sundaes on Instagram for new menu and merchandise updates at @lazysundaes. *The Canal Street location is temporarily closed until Spring 2021.

626 Night Market Is Back Again