Home Lifestyle, Food, Winter 2022Rolls off the Tongue: The Trendiness of Asian Snacks 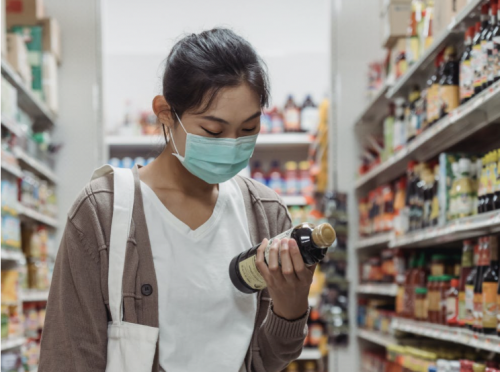 While visiting my family in Hawaii, I stumbled across the snack food aisle in an air-conditioned Longs Drugs. For a moment, I was 7 years old again, opening a care package from my grandmother, dazzled by endless shelly senbei, crunchy arare, and crisp packets of nori. Yet, as I strolled past rows of colorful, kanji-covered packaging that day in Hawaii, I realized that many of these products had reached not only the mainland, but also the mainstream. The thought sent me spiraling into conflicted turmoil. Like many Asian American children, I’d been teased for years about the unconventional contents of my lunchbox. Now, my non-Asian friends finally understood just how delicious those snacks were. Wasn’t this what I’d always wanted? Why, then, was I so angry?

It all started with nori. For years, nori — or “gim” in Korean — was something only other Asians seemed to understand. At lunch in elementary school, I’d wolf down several salty sheets straight from the package, while my Chinese American frenemy poked fun at me for eating a “snacky,” unhealthy brand. My other classmates teased me, too, but for different reasons — they couldn’t understand how I ate something that, in their minds, washed up on beaches or wrapped slimily around their legs. Yet, as I reached teenagerhood, nori — or “seaweed snacks,” as they were now called — suddenly skyrocketed in popularity. Thanks to the health food obsession of the 2010s, Americans everywhere sought the newly-proclaimed superfood. Around the same time, I noticed Asian foods like gyoza and spring rolls mass-produced in supermarkets like Trader Joe’s, several filling the shopping carts of non-Asian customers. Even more recently, on virtual billboards around New York City, I spotted bright, aesthetic ads for My/Mochi Ice Cream, whose purple packaging suddenly appeared in freezers everywhere.

With so much visibility for our beloved cuisines, one would think this fad is a cause for celebration. Yet for many Asian Americans, this new craze stings. For as long as we can recall, our peers have taunted us for our food. During my trip to Hawaii, over poke appetizers, my grandfather mentioned the derision he faced as a young man for eating raw fish. My mother’s classmates similarly mocked her ochazuke breakfasts, a stark comparison to their Cheerios and Wheaties. As a high school sophomore, I hid my furikake arare (rice crackers coated with sesame-seed- and nori-based seasoning) after a junior likened it to a bag of weed. Now, those same detractors devour the snacks they once ridiculed because of their suddenly trendy status, flaunting their wokeness for eating foreign foods — and enjoying them.

Even worse than this hypocrisy, non-Asian-owned companies are profiting from Asian cultures while spreading misinformation about the snacks themselves. Trader Joe’s, headed by white CEO Dan Bane, often creates a different name for the snack to be more appealing to non-Asian customers: for example, “green onion pancakes” for Taiwanese cong zhua bing, or “rice cracker medley” for arare mix. Admittedly, some of these products taste different from their Asian counterparts, yet others appear nearly identical to traditional fare. As if to replace the true Asian creators, Trader Joe’s devises a stereotypical persona for these products by marketing Chinese dishes under the name “Trader Ming’s” and Japanese dishes under “Trader Joe-San” — a decision they have refused to change and even defended. I imagine this brings “exotic” spice and a semblance of cultural diversity into consumers’ lives while, at the same time, preserving a comfortable status quo.

My/Mochi also takes undue credit for their recipes, claiming that their former CEO “created” mochi, as if Japanese ancestors hadn’t prepared it for thousands of years. The CEO in question, Frances Hashimoto, a Japanese American entrepreneur, invented mochi ice cream in the 1980s. In 2015, Century Park Capital Partners — whose team is composed of seven white men and two women — bought Hashimoto’s former company, Mikawaya. Today, featured prominently on their website and in ads, they use the words “mochi” and “mochi ice cream” interchangeably in a misleading branding strategy. (A few articles detailing the complex history of mochi and its varied uses do exist but are buried deep within year-old blog posts on the My/Mochi website.)

Fortunately, not all of this newfound attention is opportunistic. Watching Asian-owned businesses profit from this trend is, for me, a source of joy. For example, gimMe Snacks — my personal favorite 100% organic brand of gim — was founded by Korean businesswoman Annie Chun and her family. Their website mentions the history of gim as a “healthy Asian snack.” As these snacks continue to grow in popularity, it is unrealistic to expect that every company will, or should, be Asian-owned. Still, we can hope that they will continue to acknowledge the origins of their products — and that other corporations will follow in their footsteps.

Seeing Asian snacks gain wider recognition and appreciation can bring broader changes, and hopefully will lead to less discrimination in school cafeterias and beyond. Often, consumers do not know the history of the dish simply because they have been misinformed by the companies themselves. While it is not our responsibility to correct every instance of ignorance, in some circumstances, it can bring about a greater appreciation of diverse Asian cultures and the delicious cuisine that both nourishes and unites us. This trend will not last forever, but maybe we can use this time in the spotlight to introduce some lesser-known treats to the mainstream — something I considered as I filled my shopping basket in the aisle of Longs. From nostalgic Tomoe Ame to sweet-and-sour li hing mui powder, I’m looking forward to feeding my friends these mouthwatering snacks — and sharing the intricate stories behind them.

Gwen, Your Sh– is Bananas

Content warning: This article contains references to suicide. If you or someone you know needs assistance,...