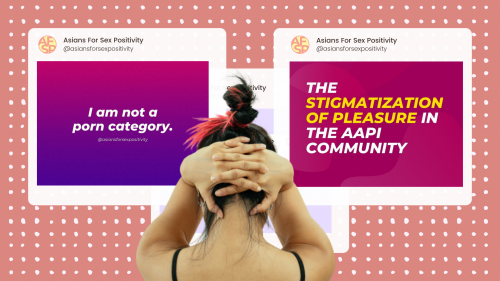 The latest wave of anti-Asian sentiment, hate, and violence in our nation has pointed a spotlight on the precarious position that Asian American women hold in our society. Both fetishized and silenced, we can express neither our thoughts nor our sexuality without being simultaneously stereotyped and neglected. The Atlanta Spa Shooting made one thing clear: white American society and systems of justice are unable to repair the deep-rooted intersectional oppression that Asian American femmes experience every day.

A post shared by Asians For Sex Positivity (@asiansforsexpositivity)

When did Wang first have “the talk”? It was a month or so into the pandemic when Wang told her parents that she was in a long-term relationship — that was the first time she’d ever talked to them about relationships and dating. To be clear, she was already an adult at this point and was sharing with them because she had recently moved back into their house.

And that’s when it clicked: “So many young Asian Americans have a similar experience,” Wang says. “[Our] parents don’t know enough about sex, or simply don’t have the resources to talk about sex or feel uncomfortable or awkward talking about it with their kids. But it’s such an important topic to be well educated in, since there’s a general stigma surrounding sexuality, especially in API cultures.”

Aside from being bored and having extra time, the idea of starting AFSP resonated with Wang because she is already a champion of sex positivity in her visual art work that explores intimacy, sexuality, and the human body. The sex positivity movement strives to destigmatize sex and reframes sex as healthy, natural, and consensual. To be sex positive does not mean that you even have to engage in sex or like it, but like many movements for choice, it advocates supporting others in their expressions of sexuality and sexual preferences. Activists and organizers aim to broaden sex education and have conversations about pleasure, particularly for femmes who don’t often get the chance to explore what it means to be satisfied or have pleasurable sexual encounters.

“Having sex as a woman in our American culture is viewed as a guy is taking something away from you, like you’re ‘losing’ your virginity,” Wang says. “When we start having sex for pleasure, especially as women, we have agency with our own sexuality and that’s when people get really uncomfortable by it, because, in a sense, we’re challenging the patriarchy. We’re saying that, ‘We as women, we can be agents of our own body, and we can have that power and and men are threatened by that.’”

Throw being Asian American into the mix and racism comes into play as well. As Wang explained, the fetishization of Asian women stems back to the 19th century when Asian women were banned from immigrating to the United States. Stereotypes abounded claiming that Asian women were carriers of disease and would end up being sex workers. As time went on, this objectification of Asian women continued: In early American cinema and even in certain modern-day films, the Asian woman is often portrayed as submissive and simultaneously, exotic and sexy.

So how can Asian American femmes resist fetishization? Wang says, “First, I would recommend discovering what sexuality means to you and really finding ways to explore that within yourself before you do that with someone else. A lot of times we think of sex as this thing that you have to do with somebody else, but when another person is in the picture it gets so muddied and that can lead to a lot of, you know, messy situations.”

It’s a really powerful thing to understand your body’s needs, desires, and boundaries, Wang shares. And it’s never too late to do so, because sexuality is fluid and can change throughout your lifespan. Talking about sex is another great way to fight the stigma. When I asked Wang what her favorite topic to post about on AFSP, she answered: “Vibrators — oh, and queefing!”

A post shared by Asians For Sex Positivity (@asiansforsexpositivity) 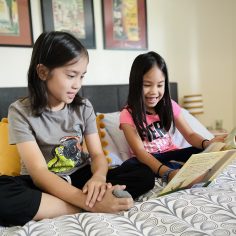 Here are eight recent children's book releases that Mochi Mag has been reading, in anticipation of the new... 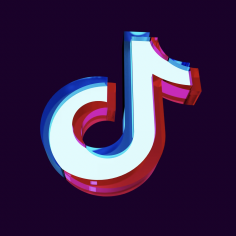