Home Relationships, Our VoicesAuntie Mochi’s Sad But True Guide to Friendship in Your 30s and 40s 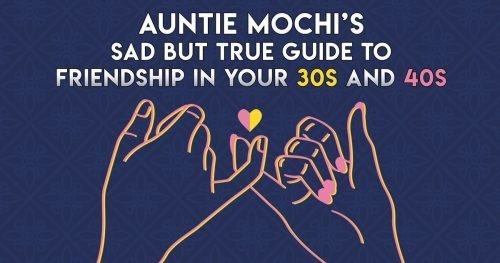 Excuse me while I show my age, but whenever I think of friendship, I cannot help but think of Zack Attack from the show “Saved by the Bell” and their song “Friends Forever.” How could I not with iconic lines like, “Through it all, hangin’ tough, we’ll stay side by side. We’ll be friends forever, ‘til the end of time.”

I love this song because it’s so terrible, yet it perfectly captures my halcyon days (in both fashion and attractiveness) and the unwarranted optimism of youth. What do teenagers and pretty 20-somethings know about forever and how work and mortgages and student loans and children and partners chew you up and spit you out and truncate forever into more manageable chunks of “for the time being”?

Hmmm. Did that swerve too dark too quickly? Let me ease you in to how your friendships might change when you’re older. That is, if you’re still with me and haven’t yet yeeted yourself into the sun.

Without further ado, I bring to you Auntie Mochi’s sad but true guide to friendship in your 30s and 40s (and a brief and tragic glimpse into your near future):

1) There are circles of friendship. Know your circles.
Think of your relationships like a bulls-eye. In the very middle is your inner circle of three to five friends. These are your ride-or-die friends — your closest confidantes. Each concentric circle represents larger and larger groups of people. The closer they are to the bullseye, the closer they are as friends. The farther out they are, the more on the periphery they are in your life.

Friends will move in and out of the circles — even the inner circle — and it’s okay. Depending on your life stage, your career trajectory and even your interests, it’s totally normal.

The key is having appropriate expectations of yourself and your friends. Are you expecting inner circle loyalty and commitment when they may only consider themselves as an outer circle friend? Does someone want you to be an inner circle friend, but you only have the bandwidth to be a mid-circle friend?

Oh, and it’s perfectly normal to mourn the loss of closeness or be sad when your expectations aren’t realized. Remember: just because someone was a good friend for a season doesn’t mean that you’re no longer friends if the relationship drifts or changes. It just means that it’s different. Be thankful for that season and let it go.

2) Friendship takes intention.
In college and young adulthood, you usually live in close proximity to your friends. Whether it’s because you are in the same dorm or apartment complex, are roommates or work together, it’s relatively easy to make and keep friends. All your interstitial moments are together. Of course, you’re friends.

But when you graduate and people start leaving the state for job opportunities, love or family, it is no longer so easy.

You want to stay friends with people? You have to work for it. Sometimes it will be worth the effort. Sometimes, it won’t. But either way, you need to put in the time because there is no more walking down the hall and popping your head into their dorm to see if someone’s up for hanging out.

You need to do things with intent — and you have to approach your friendships with intent. It’s not just initiating or reciprocating. It’s realizing that every friendship you want to keep requires intentionality.

3) Making new friends is hard. But it’s also easy.
Truthfully, it’s no easier or harder to make friends when you’re in your 30s and 40s. It just seems that way because everyone has so much less time. But the benefit is that the internet provides so many more possibilities because you don’t have to actually meet in person! Plus, the internet automagically pre-sorts you into interests so you already have things in common.

4) You will attract people just like you.
I have a friend who constantly complained that the friends she made were fake and image-conscious. I broke it to her gently (okay, there really is no way to do this gently) that the reason she attracted people like that was because she was fake and image-conscious. If she craved real relationships with real and genuine people, then she had to be one because people can smell a fake person from a thousand miles away and do everything they can to avoid meeting that type of person.

Be the friend you want to make. I know this is some serious woo-woo crap, but I swear it’s true.

5) Group chats replace actual hanging out.
In fact, you will have many group chats. Likely one for each group of friends or interest group. Or Facebook groups. Or if you’re really on top of things and super corporate, your own Slack channel.

LINE app? KakaoTalk? WeChat? WhatsApp? Marco Polo? YES. I have them all. I will even accept the antiquated messengers indigenous to Facebook, Instagram, and even (gasp), iMessage.

Perhaps I am so out of touch with young people that this is indeed how you lovely humans communicate regularly anyway. But I will also add that this is not an in addition to actual hanging out. Group chats are likely the ONLY way you will talk to your friends due to the strictures of time and space.

Since the 20 years I have graduated from college, my friends have moved to every habitable corner of this planet and we cross multiple time zones, countries and borders. But even without these adventurous friends, it’s just as difficult — if not even more — to see my friends within a 15-minute radius of my house. (See below.)

6) Getting more than two people together requires a Master in Logistics and Supply Chain Management.
In fact, this applies even to a gathering of two people. Moreso if you are neighbors.

My children are always complaining that they wish they were grown up because then they could do whatever they wanted, whenever they wanted. I dissuaded them of this ridiculous notion as soon as possible.

I rarely get to do what I want when I want. My life is dictated by my children’s schedules, my husband’s schedule, work, groceries, errands, and sleep. If I got to do whatever I wanted, I would be following BTS around the world, living the Groupie Life I know I am capable of. But, no. Instead, I’m writing on deadline about how my life has taken a decided turn to boring.

Oh, that’s not what this article is about? Just checking to see if you’re still paying attention.

What was I saying? Ah, yes. I rarely get to do what I want. Neither do my friends. Thus, even with my best friends, we see each other maybe once every six months. YOU try aligning the work, nap, school, and activity schedules of your three closest friends and the 400 children you have between you. (Because 2 children is 99 more than 1 child.) Hence the magic of group chat and oversharing on social media.

7) Social media will be the primary way of finding out information about your friends.
Unpopular opinion: I love Facebook and social media.

The internet bemoans the loss of real friendship and connection due to the highlight reels social media encourages, (I’m looking at you, Instagram), but I say that’s nonsense.

I have now reached the dubious distinction of being out of college more than half my life. I spend the majority of my time with four small humans that share half my genetic makeup and a husband who I surely do love but would rather not chat with too extensively on the off-chance he says something to annoy me to the point of researching community property statutes. My friends are in similar life situations and even if not exactly, they are busy in ways no less important.

It also saves me the trouble of actually having to be in these people’s lives. I may be an extrovert, but I can barely keep track of all my children. I cannot handle being deep enough in other people’s lives to find out the juicy bits.

Thank goodness for social media so I can get the tea without having to make the effort to get the tea. If you’re not on any social media, you might as well be dead to me because I am that shallow of a person.

8) When you actually do get together, there will never be enough time.
It’s so cliché, but clichés exist because they’re true. When you have the opportunity to see your friends, it will seem as if no time has passed at all in between, and all too soon, you will have to go back to your regular life. Enjoy that moment.

But also, don’t feel bad if you end up feeling as if you’ve outgrown each other. Be grateful for the chance to meet up and let them move to a further circle. It’s okay.

9) The motions of being a good friend don’t actually change.
Now that I have thoroughly depressed you, take heart. It’s not the how so much as the where. You will do most of your friendships online and in between the spaces of your “real” life (like when you’ve locked yourself in the bathroom to cry). You just have to translate so much of what you used to do in person to a virtual space.

And who knows? By the time you reach your 30s and 40s, perhaps we will have invented Tesseracts and all my blatherings will be for naught. But until then, you have been warned.