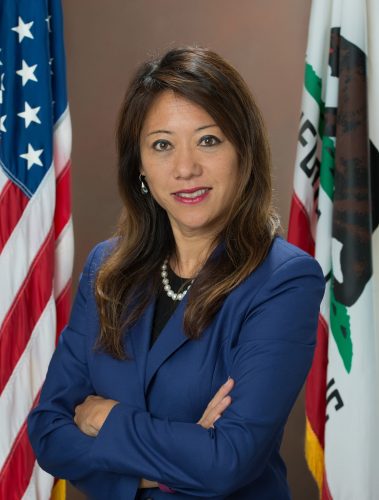 Leadership has been on my mind a lot lately — on the national level as we head into an election year, as well as in my personal life as I think about who is in charge, what power entails, and what leaders do. There are many different kinds of leaders, but one thing they have in common is their management responsibilities, whether they’re managing people, money or resources.

Fiona Ma manages all three. As the California State Treasurer, she and her staff of 450 employees handle the $2 trillion to $3 trillion that come in through the treasurer’s office to fund schools, infrastructure and other public projects. I had the opportunity to talk to Fiona Ma about her role, which she was elected for on Nov. 6, 2018. She comes to this role with her background as a CPA since 1992, along with other positions at city and state levels.

In our interview, she talks about the nitty-gritty of her job, how she got there, and what leadership means to her.

YS: When you first went into politics, what were your goals? Did you ever expect to become a leader in California?
FM: I started my own CPA practice when I was 28. While networking, I got tapped to become the president of the Asian Business Association to secure more opportunities for women- and minority-owned small businesses. My mentors encouraged me to get more involved in politics. I applied for and got appointed to the San Francisco Assessment Appeals Board as an alternate member where I heard property tax cases. A year later, Assemblyman John Burton hired me as a part-time Representative where I helped constituents and represented him at a lot of community events.

I do what I do because I really like helping people and being able to level the playing field. I never dreamed of being an elected official. But one thing led to another and eventually, I thought I could do a better job than the existing officials. It took eight years before I finally ran and got elected to my first position on the San Francisco Board of Supervisors representing the Sunset District (aka the Chinese District) in 2002 at the age of 36.

As the only Asian and Pacific Islander elected, I became the “go-to” person for the community. In the Sunset District, I realized that immigrants and limited English proficiency speakers needed our help. I saw the opportunity to bridge that gap and hired two Asian women who spoke Mandarin and Cantonese… a first back then.

In the Legislature, my role was more policy oriented and we were able to get 60 bills signed during the Great Recession. One of those bills was AB199, which requires the contributions of Filipino veterans from WWII to be included in our [11th grade U.S.] history curriculum.

And then I got elected as a de facto tax collector and arbiter on the State Board of Equalization, which opened my eyes to how our tax agencies work, and sometimes don’t work so well, for taxpayers.

Today, my life has come full circle where I am using both sides of my brain and, most importantly, to my father’s credit and approval, I am utilizing all of my degrees and my private and public work experience as the 34th California State Treasurer.

YS: How important is it to have allies and a good team? How do you build a supportive staff?
FM: I played sports in junior high and high school and really enjoyed team sports best. As a senior in high school, I was the captain of my teams. So I understand the power of teamwork and having team members you can trust to do their job, to pick folks who will excel at certain positions given their strengths and weaknesses. I consider my team members as my extended family and not just as coworkers. We are always on the lookout to recruit new #MaSquad members to join us.

YS: What does good leadership mean and look like to you?
FM: Good leaders need to mentor and train the next generation to be good leaders. Great leaders need to trust and empower folks and help create a path for them to succeed. That means spending time with your team. They need to feel comfortable asking questions, [be] encouraged to make mistakes (without getting blamed or fear getting fired), and ultimately be given the opportunity to be challenged and to succeed in their own right. Leaders should not feel like they are the smartest or best person in a room. As the old saying goes, “The same people you see going up are the same ones you see going down,” so be humble and treat everyone with dignity and respect.

I like to be surrounded by positive, smart, diverse and passionate people who are good at what they do —  whatever it is — but have a sense of compassion and mission to pull others up behind us while getting things done.

YS: Are there any mentors who’ve influenced you in your political career?
FM: My first political boss, John Burton, (who has had many titles over his life) has been the most influential mentor in my public service career. He always says, “Remember who brought you to the dance,” which means loyalty. He always supports those who don’t have a voice and those who need the most help, and he consistently stands up for what is right even if he is the only one standing. I try following these three guiding principles daily.

Congressman Mike Honda is another mentor who has spent quality time with me and so many others to show us that elected officials can have fun and be real, and we don’t have to hide at home to protect our political image. Mike also believes in doing what is right and many times has faced a lot of backlash from his own communities and longtime supporters.

YS: Do you think there’s a generation gap, politically, between young Asian Americans and their parents?
FM: Absolutely. I grew up with a Tiger Dad who wanted us to be one of the “L.E.A.D” professions: lawyer, engineer, accountant or doctor. I do believe many Asian parents these days have the same hope for their kids, but add a “P.S.” They want their kids to be happy in life and to also do things they are passionate about. This P.S. mindset frees young people to be curious. The internet and social media also influence young people to get more involved.

Currently, there are a group of 10- and 11-year-olds that come to our CalSTRS [California State Teachers’ Retirement System] board meetings every month to testify [about] the damaging effects of climate change and how we should divest from fossil fuels now. They are passionate and articulate, and dismiss the usual excuses posed by adults. They demand that we, as trustees of the second largest pension fund in the nation, do the right thing for their kids and grandkids. I am excited to see them every month and have a renewed sense of hope that these young people will be our future elected leaders who will stand for a more sustainable, cleaner, safer and just society.

YS: You have big responsibilities as California State Treasurer. How do you cope with the responsibilities and stress rising to this role?
FM: This is my fourth elected position, and I was put through the ringer for my first two positions. But I made it through and I am grateful, as the oldest child of immigrant parents, to be an Asian American woman in one of the highest elected offices in the U.S.

Yes! This is a lot of responsibility, but I feel I’ve been training my entire adult life for this role, so I am comfortable overseeing budgets and engaging in tax policy.

I feel lucky that I have inherited an amazing group of professionals who care about doing a great job and mentoring the next generation to take over and continue our work. What’s also amazing to me is that in the year 2000, the State Treasurer’s office had 450 employees and today, as the fifth largest economy, we still only have 450 employees despite the increase in dollar volume and responsibilities over the past 20 years. This means that our folks are highly trained to adapt to the changing fiscal conditions. And for this… I sleep well at night.

YS: How do you achieve work-life balance? What do you like to do outside of work?
FM: I’m an extreme extrovert, which means I get energized being with people. Ten years ago, I was fortunate to meet my husband Jason Hodge, a Ventura County firefighter and an elected official of the Port of Hueneme. We don’t have kids, so our time is spent with [other] people and experiencing all that life has to offer. We don’t have a work-life balance conflict like other couples; our work is our life and our life is our work.

YS: How do you evaluate your own success? When do you feel satisfied or know you’ve done a good job?
FM: As an accountant, I believe numbers don’t lie and thus am highly focused on metrics. I like to tackle the hardest issues before they become mainstream, and bring stakeholders together to come up with the best possible solutions. I feel satisfied when I have strong numbers to present to the public. And I know I’m doing a good job if I sleep well at night.

YS: What can we expect next from the Treasurer’s office? What long-term goals or projects are you most excited about at the moment?
FM: My team and I hit the ground running on Jan. 7, 2019. Here is [the latest] summary so you can see the different areas we are working on.

But to sum up, we are laser-focused on alleviating our housing crisis, [starting] with a 15-city Listening Tour. We are now in the process of revising our Tax Credit Allocation Committee and Debt Limit Allocation Committee regulations to streamline processes within our agency and ensure we are proactively funding affordable housing.

As a CPA, I also know that our General Fund is highly dependent on income and sales taxes, so attracting and retaining high-paying jobs in California is a priority. I oversee programs that offer tax incentives, grants, loans and bonds, and we will continue to work closely with the Governor’s GoBiz office to ensure that California competes against other states for businesses and jobs.

Climate change is real, and California is the leader in pushing for higher mandates to address it. My office has many programs that can financially assist homeowners, business owners and manufacturers to adapt to the goals set by the state.

And financial wellness is our last major focus. We need to encourage more people to save for a rainy day, to save for their children’s futures, and to save for retirement. I oversee three programs that are professionally managed with low fees, full transparency, [and] accountability and [are] easily accessible to account holders:

Follow what Fiona Ma is up to at the Office of the State Treasurer and on Facebook.