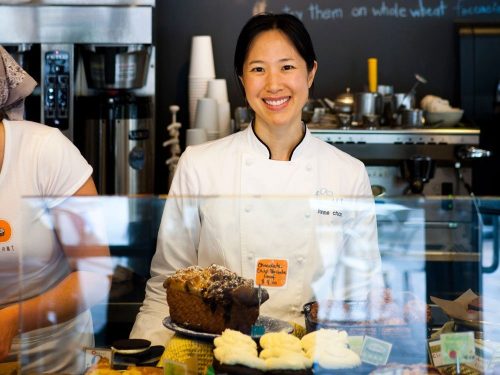 We all know the question every grown-up loves to ask and every teenager hates to answer: “What do you want to do when we grow up?” For Joanne Chang, the answer seemed to lie in science and mathematics. As the owner of the famous Flour Bakery in Boston, she is an inspiring example of how an arbitrary childhood interest can be transformed into a viable career.

A beloved local pastry chef, she has established herself in a field unexpected of most business majors. Her determination and passion for desserts won her bakery features and accolades in Gourmet and Food & Wine, as well as numerous awards in Boston Magazine. In fact, she challenged Bobby Flay with her famous sticky sticky buns on the Food Network’sThrowdown with Bobby Flay—and won.

Not that life was always this sweet. Chang grew up in a traditional Chinese household, and though she might not have had a tough tiger mom, she admits in her recently published cookbook, “I rarely had the chance to indulge my sweet tooth. Most Chinese meals end with nothing sweet [so] I wasn’t introduced to the idea of dessert until around 10[-years-old] or so, when I started going to sleepovers with my friends and eating at their houses more.”

But once she had her first mouthful, it was love at first taste: “What started out as a curiosity, stemming from my love for sweets, eventually developed into a full-blown obsession with desserts and pastries.”

She first started selling baked goods at Harvard, where she became known as the Chocolate Chip Cookie Girl. Though Chang knew she had terrific baking skills, true to the Asian stereotype, she stuck with practicality and graduated from Harvard prepared to enter the world as a professional management consultant. But after a few years of working at a top management firm, she soon realized she wasn’t cut out to be a consultant forever. “So I decided to try my hand at something I’d always loved: cooking and baking,” she said.

With little professional cooking or baking experience, Chang started working her way up the kitchen hierarchy by contacting local Boston chefs to gain some background. She first began as a bar-food cook for Boston favorite Lydia Shire, eventually moving to Manhattan’s Upper East Side to continue her culinary education. With French pastry chef Francois Payard of Payard Patisserie, she mastered both technique and creativity.

A quick learner, she began to see that personal and professional baking are very different affairs. After all, professional baking is a job, and that means, “you have time deadlines and lists and standards you have to adhere to,” she said. “At home you can afford to be a bit sloppy or imperfect. At work you don’t have that luxury—but once I stepped foot in a professional kitchen I was hooked.”

She began dreaming about opening her own bakery after her time in New York, and in 2000, she established Flour in Boston’s South End.

Since then, she’s successfully opened two more Flour bakeries in Greater Boston as well a restaurant, Meyers and Chang. Opening this restaurant with her restaurateur husband offered Chang a chance to “feature desserts that have an Asian twist.”

“It’s a fun way to incorporate my love of desserts with my love of Asian food,” she said. The most surprising part of her job? “People seem to find chefs fascinating [and] it’s funny how chefs are now considered celebrities. Most of us are just doing what we love to do.”

But that’s the funny thing about having a passion; some people may harbor a love of cooking and never act on it. But professionals like Chang know that following a dream, no matter how off the beaten path it may seem, can still end in success—as long as you put your heart and soul into learning the craft. For those who want to pursue culinary dreams, she suggests getting hands-on experience. She advises chefs-to-be to “try to get a job in a local restaurant or cafe so you can really see what it’s all about. It’s an awesome profession, but it’s not always what you think it is.”

No matter what you decide to do later in life, remember to enjoy what you love, like Flour’s motto: “Make life sweeter…eat dessert first!”