Home Lifestyle, College, Winter 2022The Disposable Self: The Cost of College for an Asian American

The Disposable Self: The Cost of College for an Asian American 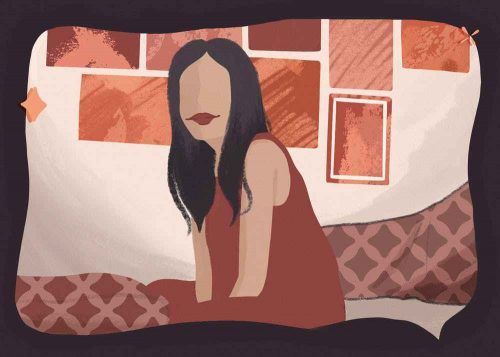 The afternoon sun touched my brown skin, giving an unnaturally golden glow to my reflection in the computer screen as I stared into the Zoom meeting going on behind it. We were discussing a rather heavy topic that day, something to do with religious colonization; Fanon’s name surely came up. I had unfortunately not done any of my readings that week. As I zoned in and out of the drone of my classmates’ performed (or perhaps not) anger, I could feel it was my turn to chime in soon. That afternoon, I gave possibly my hundredth testimony to life as an Asian/Indian/historically colonized/brown woman…you fill in the blank.

It was easy. The formula was at my fingertips after four years of repeatedly offering vignettes of mango-filled summers, stories of my grandmother’s harsh upbringing, and life here, there, and everywhere. It was the trauma porn that my classmates listened to half-heartedly, sometimes letting out loud sighs, clicking their tongues, and yet most of my professors welcomed and cherished me for it. Sometime in early 2019, during my sophomore year, I stumbled on the way in which my body was just a representation, an addition. Suddenly, anything I uttered was a gold mine, a picture painted of the third world; every easily Google-able fact about stinky lunch boxes and segregation served to remind the classroom of otherness.

Otherness is one of the most important tools colleges have in enriching the learning experience of their targeted demographics. Colleges, especially liberal arts colleges, have struggled in recent years in distinguishing themselves as still relevant havens for learning. What better way than to offer precious knowledge through the slightly diverse small classroom? How will colonization come alive through a quick online lecture series? Think instead of having a living, breathing creature from such a society.

“I speak to you in English because of colonization. Do you not see the impact it has had on the everyday?” I said into my unmuted microphone. I proceeded to narrate the basic education system in South India, where kids grow up not having learnt the languages that fill the streets outside their classrooms. My testimony was well crafted. I paused at different moments for impact, threw in some local names to assert my authority and finally repeated my question to connect back to the text I had not read. The others on my screen faced me with the nods and moved expressions I know all too well. I looked outside the window again, content with the knowledge that I would get an A for participation.

Perhaps my stories are the currency with which I pay for my grades in a classroom economy where the richer your heritage, the wealthier you become. But like any other capitalist society, this one, too, is a sinking ship filled with flaws.

History has taught me not to trust my classmates or professors to challenge me. They won’t do it, out of good faith. It is the bread and butter a lot of us learn from a young age from very lived and traumatic experiences. But I spent four years craving for someone to ask me, Shreya, not me, a specimen, what I thought of a text; to then question me, scold me, challenge me; to shift my worldview so drastically that I spend the next hours, days, and weeks tossing and turning, unable to eat, questioning my existence. I want my power, my culpability, the violence I have knowingly and unknowingly perpetrated and my precarious position to be centered. Isn’t that what I enrolled in my political science class asking for? Isn’t that what my classmates received along with their diplomas upon graduation? Instead, I spent four years tossing and turning, unable to sleep, questioning whether I was to them a full person or just any other Asian woman.

I sat tangled in this dilemma every time I was about to raise my hand to question something or spill out my “hot take.” Why couldn’t I look at the people who sat around me, people I had partied with, sneezed on, brushed my teeth next to, and trust that what they said and thought came from a good and genuine place in their hearts? But then, someone would get my name mixed up, or they would refer to me as “my Indian friend/student,” and I would go spiraling back to the behaviors I was so comfortable with.

Today, I sit in work meetings constantly getting talked over by my white colleagues and think back to the time I casually unmuted myself a year ago to have my classmates listen to me in whatever capacity they did, to make them offer me space at the very least. I want to be mindful here, however, not to paint an overly rosy picture but rather to emphasize the moments in which I was offered a voice I didn’t have before and don’t have anymore — a voice I will constantly struggle for in society. But in those seemingly utopian moments where heads turned to take note of every accented word I spoke, my own self and voice separated. I realize that when I held that invisible megaphone, I spoke not as Shreya, but as a billion other women I have never spoken to, will never be able to speak to.

I sought to write this piece as a critical examination of what it means to be an Asian American woman in the classroom, and upon reflection, it seems as though the patterns that got me the As my parents were so proud of were the same ones I spend my life after college running away from: to be an Asian American in the classroom is to forego individuality for a voice. It is to yearn, not learn. It is to live yet again in two worlds: one where our identities ease our way, and another where our identities force us to dispense of the self.