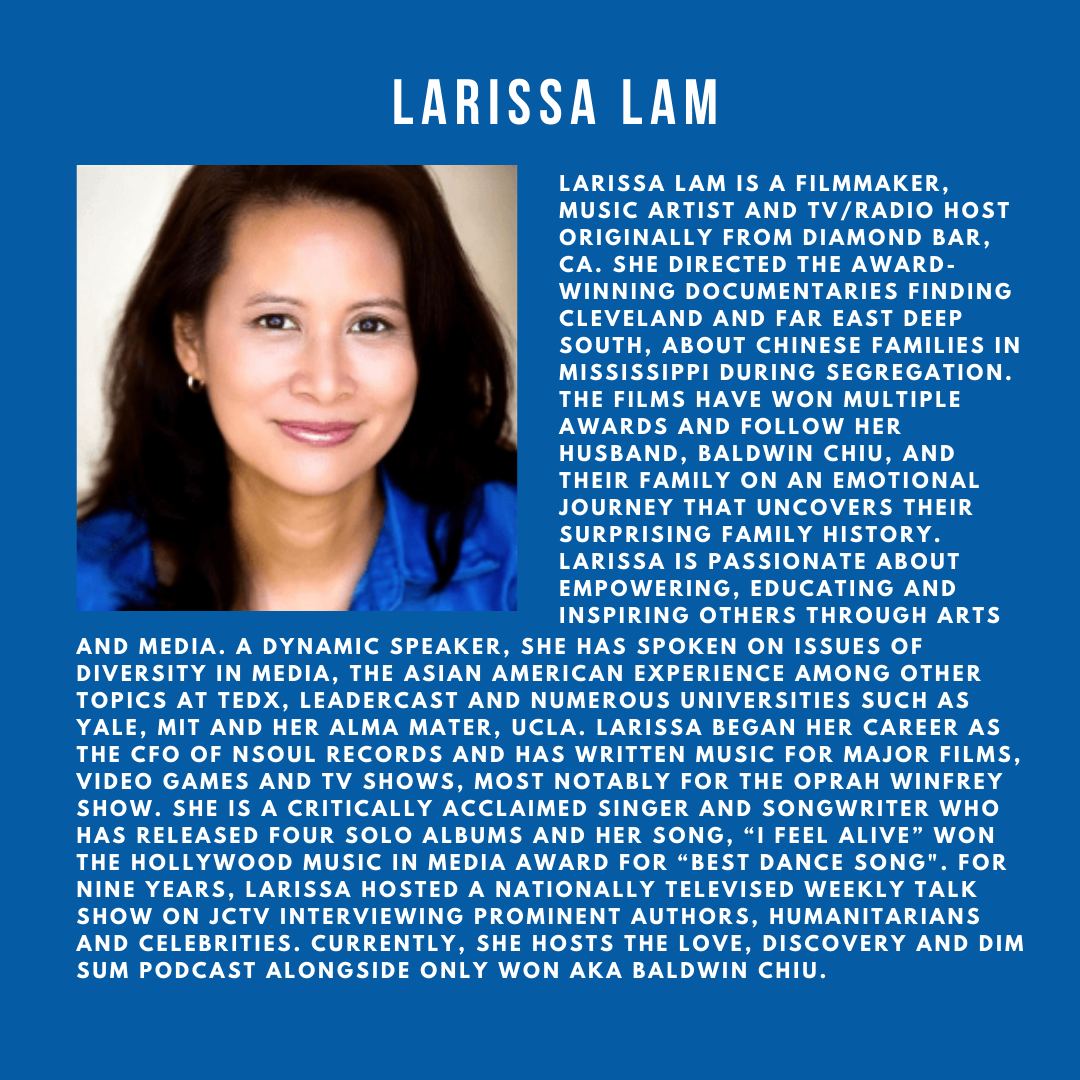 Join us for this webinar and Q&A with filmmaker, Larissa Lam, who directed the award-winning and enlightening documentary, Far East Deep South, about a Chinese American family’s surprising search for their roots that leads to the Mississippi Delta. Larissa will discuss the significance of Chinese grocery stores in the South, shed light on the shared history between Chinese and Black families during segregation and why this history matters today. This presentation will include a preview of film clips from Far East Deep South as well as a time of Q&A.

About Far East Deep South
Far East Deep South presents a personal and eye-opening perspective on race, immigration, and American identity. It sheds light on the history of Chinese immigrants living in the American South during the late 1800s to mid-1900s through the emotional journey of Charles Chiu and his family as they travel from California to Mississippi to find answers about his father, K.C. Lou. The film also explores the interconnected relationship between the Black and Chinese communities in the Jim Crow era and the generational impact of discriminatory immigration policies, such as the Chinese Exclusion Act. The film has won numerous awards including the Best Documentary Audience Awards at CAAMFest and Cinequest Film Festival.

Our instructor, Larissa Lam, is a filmmaker, music artist, and TV/radio host originally from Diamond Bar, CA. She directed the award-winning documentaries Finding Cleveland and Far East Deep South, about Chinese families in Mississippi during segregation. The films have won multiple awards and follow her husband, Baldwin Chiu, and their family on an emotional journey that uncovers their surprising family history. Larissa is passionate about empowering, educating and inspiring others through arts and media. A dynamic speaker, she has spoken on issues of diversity in media, the Asian American experience among other topics at TEDx, Leadercast and numerous universities such as Yale, MIT and her alma mater, UCLA. Larissa began her career as the CFO of NSOUL Records and has written music for major films, video games and TV shows, most notably for The Oprah Winfrey Show. She is a critically acclaimed singer and songwriter who has released four solo albums and her song, “I Feel Alive” won the Hollywood Music in Media Award for “Best Dance Song”. For nine years, Larissa hosted a nationally televised weekly talk show on JCTV interviewing prominent authors, humanitarians and celebrities. Currently, she hosts the Love, Discovery and Dim Sum podcast alongside Only Won aka Baldwin Chiu.

The Asian American Justice + Innovation Lab is a community racial justice incubator. At its core, AAJIL (pronounced “agile”) offers general racial justice education for all that employs a decolonial framework and intentionally integrates Asian American histories and experiences. Radiating from that core work is the practice of mutual care through community-building, opportunities for collaboration and innovation, and the long-range potential for participants to impact their spheres of influence with values of justice, radical love, and emergence