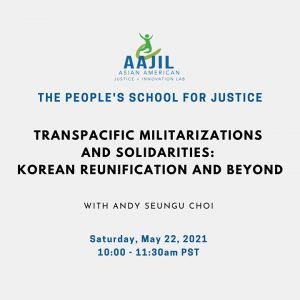 This session will discuss the problems of the Korean peninsula as part of the larger struggle against US imperialism in the Asia-Pacific.

In 2012, President Obama began his “Pivot to Asia” policy, rapidly militarizing the Asia-Pacific and expanding already wide-reaching US political and economic intervention in the region. Hillary Clinton said “…the 21st century will be ‘America’s Pacific century” that same year, and Biden has signaled his commitment to continuing this rapid militarization in an effort to combat the growing influence of China and quell the fierce social and national liberation struggles of the region. What does this pivot of the US empire towards the Pacific mean for us in the diaspora, who have our connections across the Pacific and beyond- especially when so many of our personal histories are informed by the US’ genocidal wars of interventions, which decades later continue to haunt us through US war threats, military occupation, national division, and other manifestations of US militarism?

This session will discuss the problems of the Korean peninsula and the struggle of Koreans for national reunification as part of the larger struggle against US imperialism in the Asia-Pacific. It will focus on the ways Koreans in the diaspora, specifically in the so-called “United States” can build genuine solidarity through this shared struggle, a solidarity based on a revolutionary horizon for the liberation of both our homelands and of all peoples. It will focus on local stories and struggles- from urban resistance in Los Angeles to Okinawan-Korean solidarity in postwar Japan-to appropriate the spatial imagination of the US empire for the sake of our collective liberation.

Our instructor, Andy Seungu Choi, is a writer of the Korean diaspora and a student of ecological restoration and creative writing. His work has been featured by the Asian American Writers’ Workshop, Graphite Interdisciplinary Journal of the Arts, LibroMobile, Nodutdol for Korean Community Development, the Liyang Network, and elsewhere. You can find him on Instagram @koreaarchive.

At AAJIL, we believe in practicing a culture of mutual, relational generosity rather than a culture of the commodity. Please consider showing your gratitude and appreciation for Andy’s labor in offering this free learning opportunity by donating to the organization of his choice:

Farm2Power is mutual aid collective that uplifts BIPOC farmers & provides fresh food to the Los Angeles community. Their work is critical in the struggle for food sovereignty and food justice. @farm2power on Venmo and $Farm2Power on Cashapp.