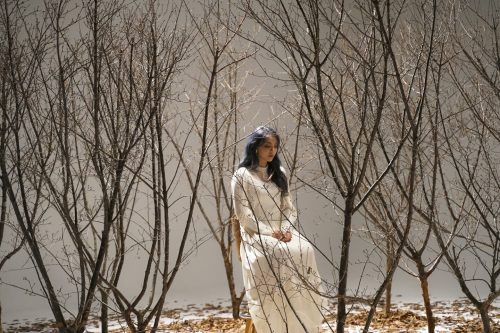 Korean pop (K-pop) singer-songwriter and actress Ailee thinks her first official English language release, “Sweater,” is the perfect holiday song. She’s not wrong. “A perfect holiday song should make people feel something when they’re listening to it,” she told Mochi magazine. “During the holiday season, everybody’s either happy or lonely or excited. ‘Sweater’ is great for people who wish they’re spending the holiday season with a certain someone, but can’t.”

Ailee dropped “Sweater” on Dec. 12, 2019, in the U.S. under independent record label Sun and Sky Records. Though the song perfectly captures the emotion, hope, and melancholy present in the best holiday songs, it wasn’t initially slated as an English record.

“Honestly, I didn’t target the song for the U.S. crossover,” confided Ailee. “It just happened. And so my manager, Paul Farberman (formerly of Celine Dion’s management) — he listened to the song and was like, ‘I f—ing love the song. We need to put this on the U.S. market right now.’”

Ailee’s team thought it was too late since it was after Thanksgiving already, but after Farberman’s repeated insistence, she went for it. “I was like, ‘Why not?’ That’s kind of my motto these days,” Ailee explained. “You want to do this? You want to do that? Why not?”

In case you’re unfamiliar with the K-pop and Korean drama (K-drama) scenes, Ailee is a pretty big deal. The Korean American artist is most famous for her powerful vocals and strong performances. She has accumulated multiple awards in Korea and her song, “I Will Come To You Like The First Snow,” became the most streamed song in K-Pop history. For months, it was the longest running No.1 K-pop song on Korean music charts.

As one of K-pop’s leading female soloists, Ailee was born in Colorado in 1989 and raised in New Jersey. She was part of a music crew in America, but in a decision familiar to many Asian Americans who want to pursue music and succeed, she said, “I decided to come to Korea [to launch] my career with a bigger audience and because I loved K-pop in high school and college.”

Her family and friends were supportive. In fact, two members of her crew also went to Korea and are still in the music industry. “I was in a bit of a conflict at such a young age, trying to decide where I wanted to do music,” recounted Ailee. “But I ultimately came to the conclusion that I wanted to start my music career where my roots are — with my heritage, instead of where I grew up. It was all part of me and I honestly wanted to challenge myself, [to] see if I could do music somewhere else other than the United States.”

Because of her fluency in Korean and having spent two years in a Korean public elementary school, Ailee said, “The culture shock definitely wasn’t as much as probably other Korean Americans who maybe visited for the first time later on in their life.” But of course, there was still a little bit. “Coming here when you’re in second grade and coming back when you’re an adult is different. You get to experience so many other things.”

Ailee rose to the challenge.

She won multiple Best New Artist, Best Newcomer, and Best Female Vocal Performance awards (among others). Her 2019 album “Butterfly” established her fourth entry on Billboard’s World Album chart by debuting at No. 13, tying Ailee with the likes of other Korean female artists such as BoA, HyunA, and Lee Hi.

When I asked Ailee how she thought the music landscape had changed since she moved overseas, she answered, “Social networking is so developed and involved in everybody’s lives, [that] it’s so much easier to actually listen and watch things that are going around the world.” Ailee continued, “K-pop seeped into the U.S., touched a lot of people and changed their lives. This generation wants more from music.”

Although she didn’t start off the “Sweater” project expecting or wanting a certain result, Ailee explained, “Because of the songs that I’ve already put out for [my] fans to listen to, they wanted me to come out to the States and sing, like BTS and other K-pop artists who are trying to make it in the States.” Ailee challenged herself with a new goal, just as she challenged herself when she came to Korea to start her music career. “I just thought ‘Why not?’ The opportunity itself just amazes me.”

Right now, in terms of future hopes and dreams as an artist, performer and actress, she said, “My short-term goal is to just get out there and finish an album first. We’ll see where it goes from there.” Farberman has arranged for Ailee to spend time in Los Angeles during the new year to work with some of the top songwriters and producers in the world.

A Special Message to Her Fans

“I am coming for them soon,” Ailee said of her international and American fans. “All I can really say is I am so excited to finally be able to have a lot more interactions with my fans overseas.”

To her fans who want to pursue the arts and entertainment, Ailee asked, “Why not? Why not do this? Why not try this? Why not go for this color? Why not go for this sound? I feel like the creative process is something so amazing. Something that comes from one person’s mind can be inspirational to so many people, and you don’t know what works until you put it out.” She further advised, “You should try everything that you want to try and just put it out there. Let people see what you’ve made, what you recorded, or what you’ve painted or drawn. Do what works best with you, yourself. And just work your way from there.”

Most of All, Ailee Wants Her Fans to Know That She’s Happy

Earlier this year, Ailee parted from YMC Entertainment and later signed with Rocket3 Entertainment. Rumors circulated online that her label was preventing her from promoting on many broadcast music programs and her fans, also known as Aileeans, theorized that it was because her contract was ending.

“A lot of my fans think that I’m going through a very hard time with my whole leaving-my-old-company situation, but I’m doing fine. I am so happy,” said Ailee addressing the rumors. “Everybody’s just like, ‘Hang in there.’ And I’m like, ‘I’m so happy.’”

It’s evident that Ailee cares deeply for her fans who are so protective of her. “Please, everyone. Don’t worry. I’m doing the music that I wanted to [do]. I’m doing things that I wanted to do for my fans. I get to be a lot more free about my creative process, and all my ideas just coming together makes me really happy.”

“The fact that my fans love everything my team in Korea is putting together for them — they’re all enjoying it, so that makes me truly happy,” Ailee continued. “I wanted everyone to know I’m overjoyed, and I hope that they don’t worry about me too much.”

In regards to the concern her fans have, “I love them for that, but I’m truly okay. I was even [okay] when the whole rumors and all those things were going around. I was still happy about the fact that I made an album for them that they enjoyed. That was all I needed.”

Stream Ailee’s new single, “Sweater,” on iTunes, Spotify, and YouTube (out now). You can also find Ailee on her most recent album, “Butterfly,” and in shows like “The Call” and “Dream High Season 2.” You can follow her on Instagram @aileeonline or Twitter @itzailee.