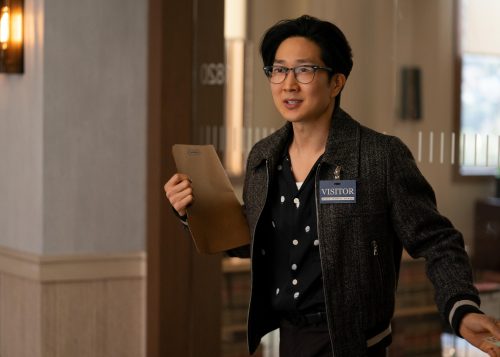 From the mind of Raamla Mohamed (“Scandal,” “Little Fires Everywhere”), “Reasonable Doubt” has similar hallmarks to a Shonda Rhimes production: a strong female lead, steamy sex scenes, and a predominantly BIPOC cast. Mohamed serves as the series creator, writer, and executive producer. In addition, “Reasonable Doubt” brings a darker and more realistic tone through the tension between Jax’s family drama, managing a separation while being the mother of two daughters, and the high-pressure job that Jax loves and devotes her life to. Moreover, the series centers successful Black people supported by other Black people. Although predominantly BIPOC casting is now in fashion, it is still rare in Hollywood to see a nearly all-Black ensemble as brought together for this show. Rounding out the cast is McKinley Freeman, Michael Ealy, Thaddeus J. Mixson, Aderinsola Olabode, Tim Jo, Angela Grovey, Sean Patrick Thomas, and Pauletta Washington.

I sat down with Korean American actor Tim Jo to talk about his role in this groundbreaking drama series. Jo plays the nerdy but sweet and sharp-witted Daniel, a series regular and Jax’s go-to private investigator. He might not have the courage to ask Jax’s assistant for a parking validation but he knows exactly what Jax needs when she needs it.

While reasonable doubt is the traditional standard of proof in a court of law, there is no doubt that Korean and Black communities in America have a shared and difficult history with one another. Despite that, Daniel has a playful and warm relationship with Jax. After tailing a suspect causes Daniel to get beaten up and brought to the hospital, Jax is immediately by his bedside telling him to rest as he jokes that he is now her favorite. And while everyone else comes close to getting scalded by Jax’s fiery nature, Daniel never experiences anything more than a comedic burn from her.

When asked about Jax’s soft spot for Daniel, Jo shares his thinking: “As I saw the story play out, I [realized] Jax has so much going on in her personal life and everything that’s going at work. Why does she keep me around? Not the Asian guy. But why does she keep me around? And that’s when I was like, it’s because I deliver joy to her, and I’m reliable and consistent. With anything, I just make her laugh, so I make her day just a little brighter. Whatever I might want to put into the relationship regarding my [race] or her [race], [at the end of the day] her soul needs my palate cleanse, and that’s how I approached the character.”

That’s not to say that race doesn’t play a role in Jo’s portrayal of Daniel. In one episode, Daniel goes to the murdered woman’s apartment and finds that the landlord is also Korean. In order to gain access, Daniel emphasizes this racial connection by speaking Korean with him but then finds himself exposed to the Korean landlord’s anti-Black comments. When he returns to Jax, he quips both comedically and poignantly, “I had to do very racist things to get this [information].”

It’s not surprising to see Jo take on this role with ease. Jo has previously graced the screen in roles adjacent to Black main characters. You will most likely recognize him from “This is Us” where he plays Jae-won Yoo, the campaign manager to Randall, portrayed by Emmy and Golden Globes award-winning actor Sterling K. Brown. In the ABC sitcom “The Neighbors,” his on-screen mother was played by actor Jackie Joyner-Kersee.

What is it like working alongside such famous Black actors? “I would say it’s more of a gift. There’s something about walking onto a set and having a sort of shared experience of just being a minority growing up in America,” Jo says.

“Reasonable Doubt” is a Hulu original series premiering on September 27.