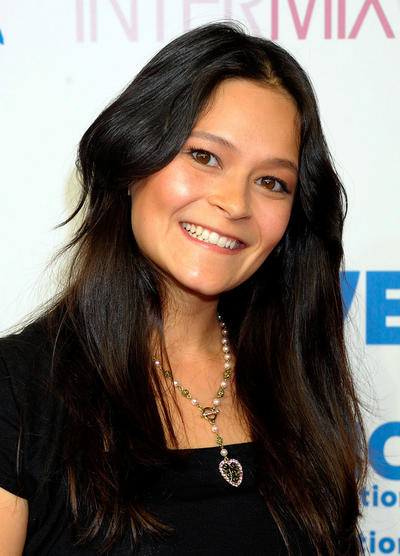 We recently caught up with the lovely actress Romi Dames, who’s best known as Traci Van Horn on Hannah Montana, and will be debuting her first single next week on Thanksgiving, called “Christmas List (Of Excuses).” Since she started acting at age nine in Japan and landed the role of Molly in the musical Annie, Romi’s always had a strong love for singing and acting. Well, there’s certainly no better way to start her singing career than with a Christmas song.
Mochi: Why did you decide to go into singing?
Romi: Well, it seems like all the actors on Hannah Montana are launching their singing careers, so I thought, “I’d better get moving, maybe this is a prerequisite to be on the show!” (giggle) No, but seriously, I used to do musical theater all the time. As I started focusing more on my acting career, singing fell by the wayside. I missed it though, so now I’ve decided to start again.

Mochi: What motivated you to do this song?
Romi: I love tongue-in-cheek songs, and I LOVE Christmas songs so I decided to combine the two. I wanted to do something goofy and fun like “Santa Baby” or “All I Want For Christmas Is My Two Front Teeth.”

Mochi: Will this song just be a single, or are you coming out with an album?
Romi: For the moment this song will be coming out as a single, but I would absolutely love to record an album! (I guess I’d better get writing, lol!)

Mochi: Will there be an official music video for the song?
Romi: I am planning on shooting a video, but it probably won’t happen until next year. I’ve never shot a music video before, but I have all sorts of ideas and it should be a blast!

Mochi: So where can we find your song?
Romi:. It will be available on iTunes and Amazon by Thanksgiving 2009, and please help me out by requesting it on your local radio stations!

Mochi: Where can fans get in touch with you to let you know if they like the song?
Romi: I love chatting with fans! They can contact me at www.facebook.com/romidames, www.myspace.com/hiromidames, or follow me at www.twitter.com/theromidames.

Here’s a preview of her single, “Christmas List (Of Excuses):”