There’s a reason comedian Margaret Cho is so beloved and has enjoyed such a long career: her stand out attitude defied all stereotypes. Could Nora Lum—better known as Awkwafina—be the Margaret Cho for this generation? She’s a young fresh face, she’s hilarious, she can rap, and she speaks to the generation of now. After releasing her solo rap album titled “Yellow Ranger” in February, Awkwafina appeared on Girl Code for the third season, and on her own show, “Tawk.” We sat down with Awkwafina to chat about her career, future goals, and of course, her most awkward moment. 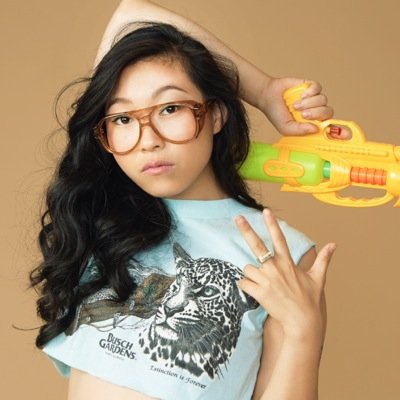 What motivated you to become Awkwafina?
My childhood had a huge influence on me. I grew up an only child, so I was often very lonely. However, it allowed me to live in a kind of creatively limitless orb. I communicated with the world by making people laugh.

How has your life changed after that one video went viral?
I really wish I could tell you life was different post-viral video.  Sure, my social media received a more-than-normal number of alerts. But other than that, I was still a nameless random Asian girl slugging to the bodega, flipping off cyclists, arguing with Uber drivers, and sniffing milk cartons at my local coffee shop.

What is it that you are ultimately trying to achieve through your music?
The “rap game” is my first love and Awkwafina’s origin. I will continue to make music until I’m an old lady. But I think Awkwafina, not Nora Lum, has more to say than 16 bars, which is why I’m starting to explore other platforms.

How did your talk show, Tawk, come about?
I was approached by Astronauts Wanted about doing a show. The only idea that popped in my head was a “ratchet talk show.” Before each show, I wake up and chug a cup of coffee. A lot of those shoots started at 7am, which is not a good hour for rappers.

What are some of your short- and long-term goals?
I want to be able to pay rent and buy food all without having to work at a vegan bodega. I would also like to influence the world at large while I’m at it.

Who are your inspirations?
I’m more inspired by writers than musicians: Charles Bukowski. Anais Nin, Joan Didion, Tom Waits, and Chet Baker. I discovered Charles Bukowski when I was 11 years old. I’ve read every single publication he has ever written. He is grimy, uncensored, and real to an extent that not many other writers of his time could pull off.

Who has shown you the most love? On the flip side, who have been your harshest critics?
My fans exist in every creed and color and are usually over the age of 16. Most of the haters (and I’m really not trying to be racial here) are 16-year-old, predominantly white females who live in Ohio.

What are some of your character traits that fuel your fans?
I think that being awkward and at times, awkwardly confident, is what fans find appealing yet relatable about Awkwafina. I have a lot of young fans, and sometimes when I look into their quirky eyes on stage, I see myself at that age.

What was your most awkward moment?
I was brutally attacked by a band of squirrels in Greenpoint, Brooklyn. One literally jumped and shimmied all the way up my leg.

Tell us about your signature look.
I wear glasses in real life, though it’s not usually the Awkwafina version. Glasses, if anything, are a power symbol of the Asian kid. We are always the first to become blind after hours of hunched-over studying, and glasses are often conflated with nerdiness. Awkwafina’s super gross 1970s-esque chemistry goggles represent that to an effect.

What pressures and stereotypes have you dealt with throughout the last year?
Speaking on behalf of any Asian entertainers, I’ve found that not a week will go by without someone leaving some nonsensical, grotesquely racist comment on one of my social media platforms. That will always happen. But in terms of my career, I’m proud to say that the only pressures I face are artistic ones—what song am I going to write next and will people dig it. What beat am I going to produce that will be this summer’s next banger. Things like that.

Since our theme for this issue is Celebration, what have you celebrated recently?
I recently celebrated learning how to cook a chicken breast in a pan. I feel like I’m invincible now.

One Reply to “13 Awkward Questions With Rapper Awkwafina”