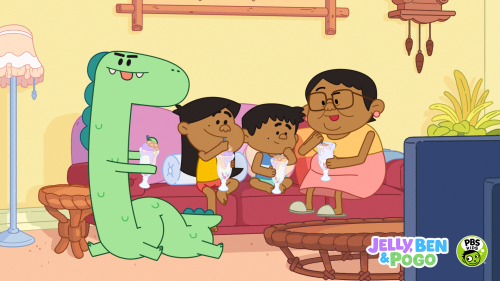 Filipino Americans are feeling super duper about “Jelly, Ben & Pogo,” an animated short on PBS Kids created by Jalysa Leva. In each three-minute episode, siblings Jelly and Ben spend their days learning, problem solving, and having fun with a sea monster named Pogo. What really makes the series shine is how authentic the characters and storylines are: from making halo-halo for their lola during a telenovela commercial break to Jelly’s concerns about inviting Pogo’s family to eat kamayan style.

Though “Jelly, Ben & Pogo” was originally intended as an interactive story/online game, PBS Kids encouraged Leva to develop the concept into a show. Leva shares, “They were the ones actually that kept telling us to add more culture. I was like, ‘Are you sure? Do people want to see more?’” With her previous experience in mind, Leva knew that oftentimes “diversity” only amounted to characters with nonspecific ethnicities of a nonspecific non-white culture in order to maintain a more general audience and be “relatable.”

“Our studio had lots of folks pitching and diversity was supposed to be important, but I just didn’t see that in the pitches that we were creating,” Leva says. “So there was me angry about this limited definition of diversity, and going home and making something. I wanted to have a show that actually matters instead of this general blah blah blah featuring characters of ambiguous ethnicities removed from their culture.”

The authenticity that Leva fought for rings loudly in “Jelly, Ben & Pogo.” When she started, Jelly was based on herself as a sister to two brothers, one more like Ben and one more like Pogo. Jelly is very organized and thoughtful — for instance, she doesn’t want Pogo’s family to feel unwelcome at their kamayan dinner and gives Pogo reminders about not drinking from the finger cleaning bowls. Ben is more on the shy side and is very careful — in one episode, he builds a burger shack out of snow and invites his lola to join him for lunch. Pogo, the sea monster, has a “jump first, think later, party attitude” that is really fun and makes the show unique.

Together with Joy Regullano, a writer on the show, and the voice actors, Leva began to incorporate more of their life experiences coming from Filipino households into the show. While Jelly, Ben, and Pogo are just like other kids in some ways, they play games like tumbang preso (where you throw sandals at a can), eat foods that are specific to Filipino culture, and use Tagalog words like “ate” (sister).

“It’s the specificity that creates authentic representation, and for a long time, Filipinos have just had to bunch ourselves into other things. Like, I guess Mulan is our Disney Princess,” Leva shares. “While making the show, even I came to a realization that I had suppressed so much of my culture. I think a lot of Asian Americans feel like they have to do the same to assimilate and avoid the jokes and overall just be more accepted. But that kind of cultural degradation doesn’t benefit anybody because at the end of the day, we’re going to look the way we look. Being able to embrace it and name the things that we do — our culture and our languages and our traditions — helps keep them alive and it’s absolutely valid.”

Audiences of all ages are loving the accuracy in “Jelly, Ben & Pogo.” It feels different when it is so accurate. “Jelly, Ben & Pogo” went viral on TikTok back in October, in time for Filipino American History Month. Leva recalls that lots of people of color were excited about the program. Many comments on those TikTok videos talked about finally being seen and being emotional about the show’s presence. Other people of color were excited that Filipino people and their culture were finally being spotlighted. Aside from sharing what it is like to grow up Pinoy, Leva mentioned that the show imparts lessons about “design thinking and social emotional learning, which are tools and model behavior that any kid within our audience can take away and use in their own daily lives.”

How’s Leva feeling about all the praise? “The first thing I felt was probably relief,” she says. “Because I had so much fear about the show coming out and how the Filipino American community would receive it. Filipinos are not a monolith so I was hoping that our stories would feel genuine and would actually feel like authentic representation to other Filipino Americans so I am super relieved that people are really connecting with it.”