Home Career, EntertainmentGlee’s Harry Shum, Jr. is Much More Than Just “The Other Asian” 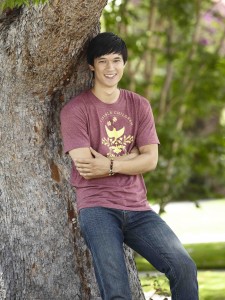 No one wants to go through life known as “the Asian dude.” But for Harry Shum, Jr., it’s a dream come true. The 27-year-old plays football player and show-choir member Mike Chang on the hit show “Glee,” but he’s much better known for being “the other Asian,” a nickname dubbed by Jane Lynch’s scary cheerleading coach character, Sue Sylvester.

Shum is no stranger to being a token Asian. Growing up in Costa Rica, he was often the only Asian in a crowd of Latin American faces. “My parents spoke three different languages in one sentence, and I would get so confused as a kid,” he recalled. While he spoke Spanish and English at school, it wasn’t until he moved to San Francisco at age six that he began to learn Cantonese as well. But that wasn’t the only difficult part of his childhood. “I was a really shy, really quiet kid—almost to the point where my parents thought something was wrong with me,” he said. So how did a young child who never spoke or socialized with others end up with a life in the spotlight?

“I always loved movies,” said Shum. “Inside, I always wanted to perform in some way or the other, but I never did. I was just too shy.” But in his room, alone, he was free to emote as he pleased. “I would sing songs and act out scenes in movies. But if anyone had walked in the door, and saw me, I would have been so scared.” His favorite performances to reenact were cartoons like “Transformers” and Michael Jackson’s music videos.

It wasn’t until one day in junior high that he got up the nerve to try out for a school play, which led to multiple performances at school. Then in high school, a good friend dared him to audition for the dance team, which exposed him to different styles of dancing, like hip-hop. “We did dances to songs by Ginuwine, and girls would scream,” Shum said. “And the football players suddenly wanted to join us.” Sound familiar? “In high school, I fell into the dance team like Mike [Chang] fell into Glee club.” 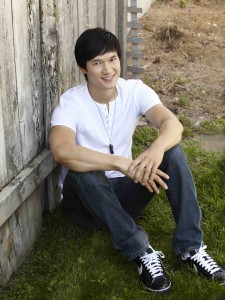 Shum’s experience acting, singing and dancing in high school set him on a path to pursue a career in the performing arts. After a brief, three-month stint at San Francisco State (where he studied cinema and international business—“to make my parents happy”), Shum and his best friend took off one day and never looked back. “He’s a music producer now,” said Shum. “We wanted to go and live our dreams.” While his parents originally had their doubts, Shum was able to convince them to let him give performing a real shot.

It goes without saying that the bet has paid off. He went on to dance in “Stomp the Yard” and “Step Up 2.” While working on the latter, he hit if off with director Jon M. Chu and joined his dance crew, The LXD (short for The League of Extraordinary Dancers). “Chinese people aren’t known for dancing, especially hip-hop wise,” Shum said. “I’m not saying they can’t do it, but they haven’t been portrayed [doing so]. It’s something that resonates as cool and hip, not the geeky Asian that people usually see.” The LXD is slowly changing this perception with the national attention they’ve received from their performances at the Oscars and the TED conference.

Of his breakthrough role in “Glee,” Shum remembers hearing that people were auditioning for Vocal Adrenaline, the rival show choir, in the pilot. “They told me [“Glee”] was cool and funny, but you hear that about a lot of shows,” he said. “I auditioned like everybody else, and I had to sing and dance.” When he got the call and e-mail letting him know he had received the part, there was no word on how involved of a role it would be. “I thought I’d be there for one day, and it ended up being rehearsal tomorrow, shooting next week. And then it kept going on, and no one told me how long I would be staying. That’s when I realized I would be there for awhile,” he said.

In the time he’s been a full-time cast member, Shum has developed a strong bond with his “Glee” cast and crew. “We don’t get sick of each other, which is really special about the cast. To be honest, that’s what makes the show work,” he said. “I’m close with everyone in different ways. Cory [who plays Finn] and I sit around for hours talking about technology. Matt Morrison [Mr. Schuester] knows some Chinese words, which he learned from friends. He can’t understand much, but he knows some Cantonese, which is always funny. Jenna [who plays Tina] and I cheer each other on, like ‘Go, Asian!’ Best of all, being part of the Glee crew means working with stellar guest stars, like Kristin Chenoweth. “She is an incredible person. Aside from being a little bundle of joy, you can learn so much from her,” said Shum. “I think the whole cast has a professional crush on her.”

When “Glee” returns from its mid-season hiatus, fans can expect a Madonna-centric episode, cameos from Neil Patrick Harris, Molly Shannon and Jonathan Groff, and much more singing. “[Creator] Ryan Murphy took the fans’ requests for stories developing in song, and you’ll see a lot more of that,” said Shum. And in the future, he hopes his character will get a love interest like Kurt and Mercedes allegedly do in upcoming episodes. “Mike Chang needs some loving!” he joked.

Catch Harry Shum, Jr. on the small screen when “Glee” returns April 13 and online at www.thelxd.com.