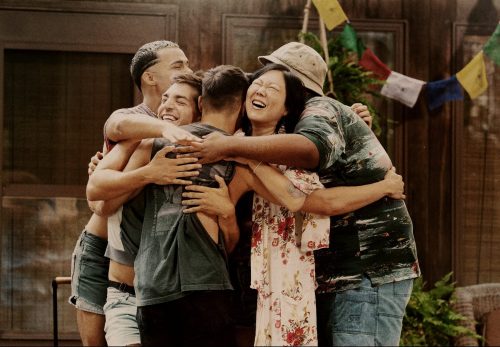 Where do queer people let off steam and party like no tomorrow? For those on the East Coast, that’d be a little place called Fire Island. Just a two-hour drive and a ferry ride away from Manhattan, Fire Island is not only a car-free, nature-laden hamlet with beaches, forests, and wetlands, but it is also a haven for the LGBQT+ community. Among the central communities of the destination, the Pines is a primarily gay community that has an active nightlife as well as a beautiful harbor. The Pines is also the setting for the upcoming romantic comedy “Fire Island.”

Directed by Andrew Ahn and written by Joel Kim Booster, who also stars in the film as Noah, “Fire Island” follows a chosen family of gay men as they spend a week at Fire Island. Centered on two best friends Noah and Howie, played by the first Asian Saturday Night Live cast member Bowen Yang, the film is an adaptation of Jane Austen’s “Pride and Prejudice.”

Yes, you read that right.

The sisters? Booster stars as the Elizabeth ​​Bennet of this crew. His character Noah is a fun-loving, fierce, and loyal sister of Howie, the Jane of the family. The premise might not be a marriage plot, but since a week at Fire Island always comes with a certain amount of debauchery, Noah’s goal is to get Howie laid. The more demure and modest one, Howie is more of a traditionalist, seeking an authentic relationship and a future with someone. Nevertheless, Howie plays along.

The cast includes some all-stars including feminist and queer idol Margaret Cho who plays the Mrs. Bennet character of Erin, a lesbian woman who owns a house on the island. Cho tells Mochi that she wanted to be a part of this film so badly that they had to rewrite the role for her. “We are getting to participate in the great American film genre of romantic comedy and this is the perfect summer romance film for people who love movies about this kind of stuff,” Cho says. “To me, romantic comedies are really essential to the art of filmmaking because it is the sort of ultimate [genre] where you can really dive and feel it.”

Who’s the Mr. Darcy of this feature? Glad you asked. It is the sauve, soft-spoken Will, played by Conrad Ricomora, widely known for his role in the television show “How To Get Away with Murder.” Throughout the film, Will’s reserved nature ticks off Noah, but in the end, his character shines through, once again reflecting the moral of Austen’s original novel: the difference between superficial appearances and actual goodness in a person.

Overall, the feel of the film is very Austenian, slowly progressing through a span of seven days, even opening with the novel’s famous opening line “It is a truth universally acknowledged.” At one point, Noah and Will are caught in a rainstorm arguing in the mud as two almost nearly lovers do in romance films. Although there is sex (that is, a lot of group sex scenes), like proper ladies, the dynamic duo Noah and Howie do not engage in such actions on screen.

Being queer is not just about sex. Cho highlights that there is a very normative understanding of queer people that lacks the nuances of real-life relationships that include bonds of friendship and family: “Howie is the baby, the little maknae, the child and the one I want to protect. And Noah is the big brother that is sensitive — he’s always out there doing all the stuff but he has definitely got a really tender heart. They have a different relationship with both Erin and within the family.”

There are scenes that were just laugh-out-loud funny. At one party, having lost Howie, Noah enters a bedroom where men are engaging in sex everywhere — Noah meekly calls out, “Howie?” just to check if he is somehow there. Even the reveal of the scandalous nature of Noah’s other companion is not only a modern-day take but truly shocking.

Whether you are familiar or not with the Austenian novel, “Fire Island” totally flips the script for romantic comedies and puts a new spin on the “Pride” in “Pride and Prejudice.” (You honestly have to watch it to understand how well this adaptation works.) “Fire Island” is not just yet another reason to queer the classics more often but also a model of what Asian representation in film can look like. “Asians have long been left out of American films since its invention. Now, we can really enjoy this very splashy, very beautifully photographed, very beautifully acted, beautifully written film that is all about our story and the different layers to our story,” Cho shares.

“Fire Island” is an unapologetic, modern-day rom-com inspired by Jane Austen’s “Pride and Prejudice.” The story centers around two best friends who set out to have a legendary week-long summer vacation with the help of cheap rosé and a cadre of eclectic friends. You can stream “Fire Island” starting June 3 on Hulu.