Hollywood Veteran Liza Lapira Hits The Mark on “The Equalizer” 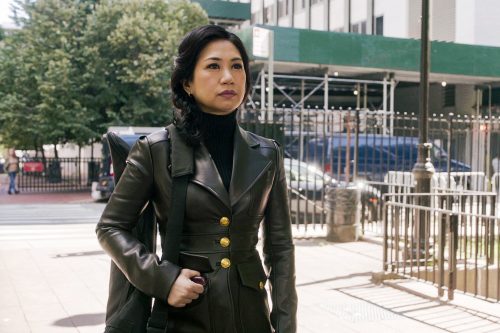 CBS’s “The Equalizer,” now in its second season, follows retired operative Robyn McCall (Queen Latifah) as she takes justice into her own hands for those who can’t get help through the systems in place. In this season alone, McCall assists an online group of true crime enthusiasts to find an anonymous stalker, prevents the murder of the city’s district attorney, and rescues a teenager from joining a dangerous gang.

So how does a girl like Mel get mixed up with vigilante justice? Lapira shares, “Her sense of justice is aligned with Robyn’s. They trained together, but Mel left the military years before Robyn did. I imagine she missed helping others in that specific, tangible way, and that’s why she doesn’t hesitate for a moment to join in when Robyn initiates ‘equalizing.’”

With over 20 years in the business, Lapira is a versatile film, television, and theater actor who has held recurring roles on television shows such as “Law & Order: Special Victims Unit,” “Dexter,” “NCIS,” and “Nancy Drew.” Her film appearances range from “Crazy, Stupid, Love” to “Fast & Furious” and “Cloverfield.” And that’s just the tip of the iceberg of Lapira’s career.

Despite her extensive resume, Lapira told me that “The Equalizer” is already one of the most memorable projects she has worked on. “Between working with Queen Latifah, shooting at iconic New York locations, being on a show with great writers, it’s a career highlight,” she revealed. “What makes it even more special is that Melody Bayani is one of the first, if not the first, unmistakably Filipino American characters on network television.”

This Sunday’s upcoming episode is the first time we get to know Mel on a deeper level. While hunting a sniper threatening the city, the show touches on Mel’s background and what it’s like for her as a woman sniper. Born and raised in New York, like Lapira herself, Mel is the child of Filipino immigrants. In many ways, Mel is the hero of her own story. As a survivor, partner, and friend, she’s a well-rounded character with her own past, her own purpose, and her own strong points of view.

“I don’t know that I saw that, growing up,” Lapira says. “The fact that this character is being debuted on such an iconic franchise with such an iconic lead actor is icing on the cake.”

That’s not the only way that “The Equalizer” is leading in representation. Tackling issues like everyday racism and how systems made to protect can discriminate against those who are most vulnerable, the show is not just action-packed but also insightful. And Lapira is not alone in being Pinoy — she’s joined by Black Filipina Laya DeLeon Hayes, who plays McCall’s daughter.

“I hope the industry, and world, keep going in the direction they’re heading: the realization that diversity isn’t a choice — it’s the actual world we live in. It’s the reality, and the more we embrace that, the more we welcome others to the table, the better, funnier, and more entertaining our stories and lives will be,” says Lapira.

“The Equalizer” is a reimagining of the classic series starring Academy Award nominee and multi-hyphenate Queen Latifah (“Chicago,” “Bessie”) as Robyn McCall, an enigmatic woman with a mysterious background who uses her extensive skills to help those with nowhere else to turn. “The Equalizer” airs Sundays (8 p.m. EST) after 60 Minutes. You can stream for free on CBS.com or subscribe on Paramount+.