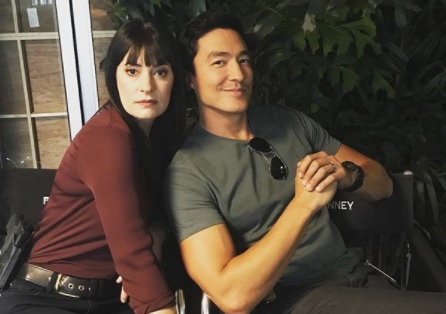 Daniel Henney, a star in the Korean drama circuit, was raised in a tiny Midwest town playing cowboys and cops with his dad. The “Criminal Minds” actor, who appeared in Korean hits like the TV show “My Lovely Sam Soon” and the film “My Father,” grew up “running through the woods with dogs” in his Michigan hometown and was the only Asian kid in a high school graduating class of 80.

While some might find such an environment isolating, Henney says he didn’t think that much about race and his upbringing actually allowed him to not worry about fitting in or being an outsider.

“I’m aware I’m half-Korean, but it’s not the flag I’m waving when I’m walking around,” Henney says. “Connecting as a human first is important, and people need to revert to being human beings.”

And although it can be frustrating as an Asian actor to get limited roles, Henney says the tides are gradually changing and it’s important to take initiative, rather than just blaming the industry.

“We hear a lot of talk of not having the opportunity and complaining about what’s out there,” Henney says. “I wanted to hit it head on and prove that I can take it from Caucasian actors … If you blow someone away in the audition room, you’re going to get roles, and you will have a career.”

That isn’t to say Henney doesn’t care about Asian representation. He cites people like John Cho and Grace Kim for raising the profile for Asians in the entertainment industry, and he is very conscious about avoiding typecasting in his own roles.

Before signing on as FBI agent Matthew Simmons, whom he portrayed on “Criminal Minds: Beyond Borders” for two seasons and who is now starring on the original franchise, Henney made sure his character was someone the audience “could fall in love with,” rather than a stereotype, like the “butt of the joke,” that Asian characters are often relegated to.

On set today with the amazing @pagetpagetgram ….love catching baddies with this amazing one:)). Tune in tonight!!! #criminalminds #simmonsandprentiss #cbs

“There was no way I was going to do ‘Beyond Borders’ if he was the quintessential Asian character like the office guy or the tech guy,” Henney recalls. “The resident bad-ass guy … it’s a role they always give to the not Asian character … if I can’t play that role, I’m not interested.”

Thus Henney is proud he gets to portray the charismatic, military vet Simmons. The “quintessential American character is not often done” by Asians, he says. However, it was also important that he could explore his Korean roots through the show. In one “Beyond Borders” episode, Simmons goes back to South Korea and fulfills his late mother’s wish for him to find his maternal grandmother. It was an episode that touched on something personal; Henney himself didn’t know his Korean maternal grandparents, and he wanted to experience that “connection for me and the character.” In fact, Henney played a hand in the episode’s production. He helped choose the wardrobe, the set dressing for what Seoul’s Itaewon district should look like and even consulted on the language.

His role hints at what makes Asian American representation truly shine — when an actual Asian person can contribute to the behind-the-scenes decisions, as opposed to non-minorities making educated guesses.

“It always begins with the writers, and having a larger presence with Asian American writers sharing our stories,” he says. More and more writers, directors and filmmakers of color have been at the forefront of stories about their lives (Lena Waithe, Donald Glover, and Aziz Ansari are just a few who have received widespread recognition recently), and Henney aims to be part of the movement. His production company has been searching for Asian-themed content, whether it’s sourced material, short films or student films, and he wants to adapt them into features and TV shows. Henney is fairly tight-lipped about exact details, but he says his goal is to “give young artists a shot” and teases a book by a Korean American woman that his company is developing into a screenplay.

The future is exciting, but for now, watch Henney as agent Matthew Simmons on “Criminal Minds,” where he’s playing the “cool cop and saving the day” — living out his childhood fantasies.