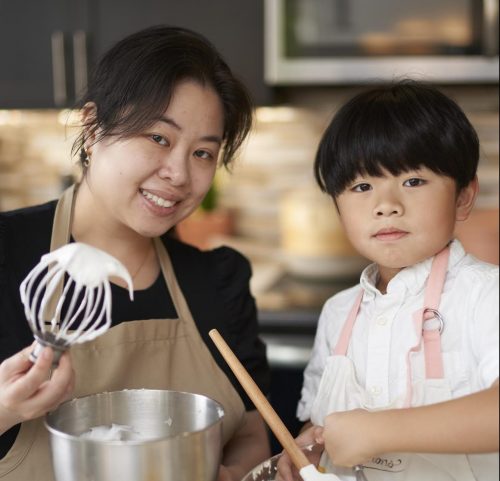 In late October, Kat Lieu entered Seattle’s Museum of History and Industry and saw her photo at the front desk, highlighting her appearance to promote her new book “Modern Asian Baking at Home.” Lieu looked past the front desk, slightly overwhelmed to see her face displayed on signs that continued around the museum. All her life, the Vietnamese Chinese founder of the Subtle Asian Baking (SAB) Facebook community had felt invisible, like her voice never mattered. But since starting SAB in 2020, she has been invited to speak on podcasts, with media outlets, and at in-person gatherings about growing an online community that has the key ingredients of collaboration, appreciation, activism, and — of course — baking.

In 2017, Lieu’s family moved from South Brooklyn to Renton, Wash., a suburb of Seattle, where she finally had a kitchen large enough for her to use the oven for baking rather than storage. Lieu started baking and posting her creations on her personal YouTube channel and in the Subtle Asian Cooking Facebook group. When COVID-19 hit, Lieu ramped up her baking, focusing on Asian recipes.

“You’re just very nostalgic for foods that give you comfort,” Lieu said. “My mom was 3,000 miles away in New York, and I didn’t know when I would see her. We didn’t know when we would fly again.”

Since the Subtle Asian Cooking group didn’t feature many desserts, Lieu saw an opportunity to start a baking-specific group. She didn’t have a solid vision at the time, only that she wanted to gather like-minded baking enthusiasts to share Asian-inspired recipes. Members could promote themselves as long as they also shared a recipe. With the country on lockdown, Lieu also envisioned online gatherings to celebrate birthdays and socialize like during pre-COVID times.

Around that time, Lieu’s dad became ill. Lieu spent nearly two months in New York City caring for him before he passed away in July 2020.

“I realized that I didn’t know what his dreams were, or even if he dreamed,” Lieu remembered. “All he knew was hard work and to take care of us. I was like, ‘Dad, I’m going to dream for you now, and I’m going to be purposeful every day. I’m going to do things that make me happy and make other people happy.’ I didn’t want to be like him and just work so hard for nothing. That moment changed my life.”

Word of mouth grew the group from Lieu’s initial invitations to 100 friends to 5,000 members within the first week. Today, the group has 155,000 members, without any money being spent on marketing or public relations. Lieu left her 13-year career in physical therapy and now runs the group full time. It was a drastic and risky career change, but her courage is paying off.

Meta recently invited Lieu to be a keynote speaker at its Facebook Communities Summit to talk about why SAB has thrived. On one hand, a factor of the group’s initial popularity came from it being a spin-off of the familiar and popular Subtle Asian Traits Facebook group — a brand that is beloved by the Asian diaspora and has inspired many other groups (Subtle Asian Real Estate, anyone?). But Lieu attributes SAB’s continued and explosive success to its tenets of collaboration, appreciation, activism, and community, and how those values are embraced and lived out by each member.

The success of the group also inspired Lieu to publish her cookbook “Modern Asian Baking at Home” in July 2022, featuring Asian-influenced drinks, custards, cakes, and other treats made with ingredients like miso, matcha, pandan, and soy sauce.

“We’re inclusive and diverse, and that’s what subtle Asian baking is all about, too,” explained Lieu. “It’s not just your traditional Vietnamese honeycomb cakes or your traditional Hong Kong egg tarts. It could be [a recipe for] an ube crinkle cookie. A crinkle cookie is a Western creation, but you stuff a mochi in there and then use ube, so it’s subtly Asian. That’s how I feel [this name] is very appropriate.”

Kneading Asian Appreciation and Activism into the Dough

While “subtle Asian” baking is ever-evolving, baking in Asian cultures is not new, despite what Paul Hollywood from “Great British Bake Off” thought when he traveled to Japan, expecting only to eat rice and noodles and being surprised to find bakeries. In Indian cuisine, tandoor ovens have been used for cooking and baking for thousands of years. The Vietnamese have their steamed bánh bò (cow cake), along with variations of steamed cakes across Asia made with tapioca flour or sweet glutinous rice flour.

“We are as legit as any type of baking — French baking, British baking, American baking,” Lieu said, adding that her childhood included frequent visits to Asian bakeries. “It’s not a trend that we made up in 2020. [We’re] reclaiming our narrative, telling our stories, and showing off our flavors and our textures — the chiffon cakes that we leavened with egg whites, the QQ texture of boba and mochi.”

As a child, Lieu and her mom never baked cupcakes, cookies, or cake pops; instead, Lieu remembers her mom making new year cake for Lunar New Year, glutinous rice dumplings, and sweet soups like black sesame soup, and dim sum. These dishes were familiar and beloved by her family, but foreign and strange to those beyond the Asian community. By raising awareness and appreciation for Asian baking, Lieu hopes the younger generation of Asians won’t experience the embarrassing “lunchbox moment” of previous generations.

This is largely why SAB is open to everyone — not only Asians — because Lieu wants Asian dishes and flavors to be accessible to all. SAB’s non-Asian members are encouraged to participate in ways that appreciate — not appropriate — Asian culture. This is contrary to white people trying to “do it better,” as we’ve seen with Lucky Lee’s, The Mahjong Line, or The Breakfast Cure’s Queen of Congee.

“Do it in a sense that you’re giving back to the culture, boosting AAPI creators, bakers, and chefs,” Lieu explained. “You’re using the techniques, textures, and ingredients appropriately. You’re doing things that give respect back to the culture, raising funds for the community, and giving us [room to use] our voices.”

Clearly, SAB is about much more than simply baking. The group’s launch coincided with the rise in anti-Asian sentiment and hate crimes, which sparked the group’s first fundraiser to help AAPI communities at the end of 2020. “We got our first taste of activism,” Lieu said. “Asian hate was happening, and we’re like, we’ve got to do this.”

After that, activism became baked into the ethos of SAB. Since 2020, SAB has raised nearly $60,000 through bake sales, direct donations, and in-kind donations for various charities, including Welcome to Chinatown and Heart of Dinner — two organizations assisting Asian communities in New York — and Very Asian Foundation.

Rediscovering the Recipes of Our Heritage

Over time, SAB has become a platform for solidarity and to collectively rally against anti-Asian sentiment. It is a place where bakers express pride for their culture and heritage — online and in person — as they wear their swag and promote the SAB brand. But not everyone outside the community is comfortable with the group’s success and Lieu’s accomplishments. Lieu has been told “shut up,” that being an Asian author has no significance. When she describes herself as a BIPOC author, she has been told “no, you are white.” Experiences like these remind Lieu why representation matters — and why she, personally, needs to break down the model minority myth.

“I’ve learned that I shouldn’t be afraid to be vocal,” Lieu said. “I shouldn’t be afraid to promote myself. My male colleagues in the past — they were the ones who were always talking the loudest, but not doing the most work. But they were the ones being promoted. Meanwhile, I’m sitting in the back wondering why I’m not getting promoted. I just didn’t know how to promote myself. So now it’s different. I’m going to own it and say, ‘Yes, I AM the Queen of Asian Baking,’ if people say that. I will accept it.”

As a mother, Lieu knows the importance of Asian representation for her 9-year-old son, who is not growing up with the same racialized identity that Lieu had as a child. Her son doesn’t speak Cantonese and is growing up in a suburb that doesn’t collectively celebrate the cultural holidays, like Lunar New Year or Mid-Autumn Festival, that Lieu did growing up in New York City. Disconnected from her strong cultural connections, Lieu struggles to build pieces of culture into her son’s upbringing.

“I feel like I’m losing a lot of my identity as I live longer and longer in America, and not being able to connect with a lot of family members,” Lieu said. “I want to learn more and embrace my Vietnamese side a little more. Regretfully, my paternal grandma’s very old now, but she was a very good baker and cook. I wish I could connect with her more, and I really wished I cooked more with my grandparents or watched them more closely growing up.”

Lieu’s next cookbook, out in 2024 under the Harvard Common Press (an imprint of The Quarto Group), focuses on savory recipes. The project has been an opportunity for Lieu to connect with her roots, specifically her grandparents and how they brought the flavors, ingredients, and recipes from their homeland to America. “The thing is, they don’t have anything written down; they go by ‘a pinch of this,’ they go by flavor, by what their ancestors told them, or by their Chinese eyeballs,” Lieu said, laughing.

Whether baking “subtly Asian” cookies or making “very Asian” family recipes that originated in China, Lieu and the SAB community are embracing the experience of the Asian diaspora who don’t feel 100% American, yet also not 100% Asian. But through this community, they are finding one another, reclaiming their voices and identities, and standing together in solidarity — baking pins in hand.

“People like Christina Yuna Lee and Michelle Go [who look like me] were slain and murdered in New York City during 2021, pushed into the subways,” Lieu said. “So here I am, reminding myself to take up space — in bookshelves, in the media — and own it and go with it, and let little girls and boys who look like me grow up realizing that they, too, can do it.”

Follow Kat Lieu at @katlieu and @subtleasian.baking or join the Subtle Asian Baking Facebook group. Her book “Modern Asian Baking at Home” can be purchased online or at your local bookstore.

Want to impress your family and friends this holiday season with some subtle Asian baking? Try Kat’s Thick and Cakey Hojicha and Miso Chocolate Chip Cookies. If you’d like to make these matcha flavored instead, please substitute the hojicha powder with matcha powder, up to 1 tablespoon. If you bake this, tag @subtleasian.baking on Instagram and use the hashtag #subtleasianbakes. 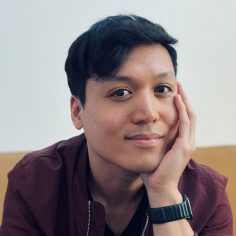