Cooking and Community with Quincy Surasmith 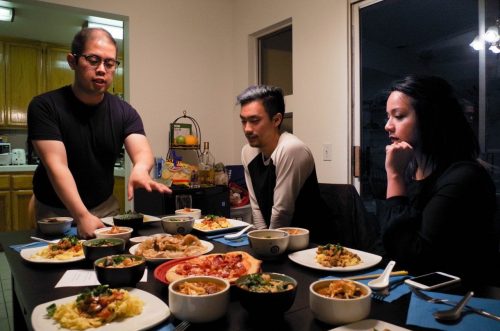 Quincy Surasmith has a knack for bringing people together. He’s a multidisciplinary artist working on two projects: Eat Kune Do, a pop-up supper club in Los Angeles and “Asian Americana,” a podcast about “slices of distinctly Asian American culture and history.” The podcast combines his expertise as an audio producer, actor, journalist and photographer to tell stories about the pan-Asian experience in America: university “cultural nights” and dance crews, facial hair and its implications of masculinity for Asian men, and putting a twist on comfort food (like adding a slice of cheese to Shin ramyun).

Through Eat Kune Do, Surasmith is also fostering community and highlighting his heritage through opportunities “to break bread and enjoy a good meal in good company.” He treats guests to a menu that he’s created based on everyone’s shared food preferences, memories and experiences. Like the episodes of his podcast, the dishes Surasmith serves include a pan-Asian twist on something familiar: Panang curry pizza, tater tots with Shin ramyun seasoning, Sriracha/soy fried tofu and avocado musubi.

Surasmith recently spoke with Mochi magazine about expanding our ideas of cuisine and found family.

YS: What inspired you to start Eat Kune Do?
QS: I was cooking a lot when I started it, but I was making the same dishes over and over. I needed something that would push me to try new things. Also, I had one friend who wanted to meet another friend. I was friends with both, but they didn’t know each other yet.

[I connected] those two ideas of people inspiring me to cook different things, and connecting people who I think would be friends, or would at least find each other interesting. Those have always been the twin ideas around Eat Kune Do, so it’s less about cooking Asian food and being really proud of it. Most of the time, I wasn’t cooking traditional foods.

That’s what I criticize: When do we pay a lot of money for food? When do we pay very little? If a white chef [travels] to learn a cuisine and comes back, they get to build a bunch of restaurants where you pay $20–$30 a dish. But if you’re an immigrant family and you make that same cuisine, but you didn’t go [somewhere to] “study” it, that food would be $6.75 for lunch specials.

YS: How do you approach cooking in Eat Kune Do, which mixes cuisines?
QS: I love exploring regionality. It’s only recently that people in the U.S. have started to recognize it, and that’s only in some places. For example, one of my favorite dishes is mapo tofu. I’ve had it ever since I was a little kid, but I grew up eating the Japanese box version until I learned how to make it myself. Then I learned that Sichuan mapo tofu gets its flavor from peppercorn, versus a Cantonese place that makes mapo tofu like a meat gravy: less spicy, but more hearty. I think that’s great that all those versions exist because I enjoy hearing people talk about those differences, not like [one is] good or bad, or right or wrong, but do I like or do I not like [one version], or is it like or unlike the [dish] I grew up with? Those are awesome conversations. That’s what I enjoy more than when we discuss how food should or shouldn’t be.

YS: Certain types of food get a lot of traction based on who makes it and in what context. What do you think about that?
QS: When you look at Filipino cuisine in the U.S., for two decades, food trend writers have been saying Filipino cuisine is going to be the next big thing. But when I talk to Filipino folks, sometimes they say, “Well, the restaurant food is never as good as my family’s food.” On one hand, you should be proud of your family’s food because it’s what you’re most familiar with. That’s what you grew up with, so that’s what you’re going to think of as the default.

But what Filipino restaurants have had a chance to actually blossom into their own style? A lot of them are steamed-tray places where you point out what food you want. Those are out of convenience. Those are probably small businesses saying to people, “Hey, you’ve had a long, hard day. Don’t worry about cooking, just come to our place. We’ve already made it and you just pay.” Or there are places that cater. They’re not necessarily trying to make a lot of fine, creative foods; they’re there to make 200 lumpia. Those both fulfill a role. Those are the kinds of businesses that survive.

YS: Your podcast “Asian Americana” and Eat Kune Do both center community. What does “found family” mean to you as a person and as an artist?
QS: When we say the word “family” by itself, [that implies that these] are the people you can always rely on, people who understand you most. But people’s biological families are complicated. Some of them have bad relationships, some of them have good relationships, and a lot of them are somewhere in between.

For me, found family is important because these are the people you choose to surround yourself with. Not everyone finds it easy to find these people. Some people think they found these people, but then they end up not being the right folks to be [safe with], to be themselves with. Ultimately, a found family is folks that fulfill the things that our family should fulfill, but your biological family may not.

It is a window into someone’s soul. It is not an open doorway. Art is not like, “I watched the movie. I saw this and I read their book, so I fully know who they are now.” You can only find out by talking to the person and having a relationship with them. Art is a great way to do that, but only if you put yourself into it. Let yourself be vulnerable. Let yourself be your fullest self in creating the things you want to create. Checking out and sharing the work of others that resonate with you is a great bridging tool.

YS: Mochi’s a magazine for Asian American women, and we want to amplify Asian voices. Is there anything you would like to share with our audience?
QS: Don’t be afraid to share your fullest self, but it’s also okay to create for just yourself. Not everything has to be for the widest possible audience.

It’s okay to make stuff for the people who will get it. But you have to accept that might not be everyone. What I’ve learned about my ability to amplify other people’s stories and voices is that very little of it is about me; it’s about other people. It’s still about me because it’s what I find interesting. Sometimes that’s from an internet search. Sometimes it’s from being on different social media platforms for different community spaces and in real life.

Don’t be only on Instagram, or only in one hangout space. Try to find new places to go or even digitally, find new things to read because you’ll be amazed at who you find. Then through who those people talk about, or who those people follow, you can find even more great stuff. So share a lot of yourself and put it out there. I promise you, it’s a growing community and adding yourself to it can only help that community be better and grow. That’s a beautiful part of connecting with other creative folks and our folks.

If you are interested in finding new artists, Surasmith recommends the following:

For your summer gatherings, impress your friends and family with Surasmith’s Thai Roast Chili Jam Mac and Cheese:

I first got the idea to use Thai roast chili jam (nám phrík phăo or น้ำพริกเผา) with cheese from Thai food writer Leela Punyaratabandhu. She described it as working great in grilled cheese sandwiches. I tried it and it totally was, so I started adding it to a bunch more cheesy foods. It adds a slightly sweet, briny, chili flavor to dishes like mac and cheese. Sometimes I saute some diced onions and red peppers and add them to the mac and cheese. You can do what you like. Also, this is an informal recipe with few precise measurements. Enjoy! 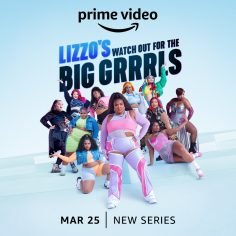 Making Big Moves: Interview with Isabel Jones of “Lizzo’s Watch Out for the Big Grrrls”

Isabel Jones, a contender on "Lizzo's Watch Out for the Big Grrrls," talks to Mochi about all things dance,... 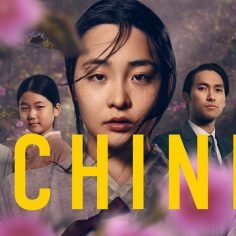 Based on the best-selling novel of the same name, “Pachinko” is a sweeping multi-generational historical... 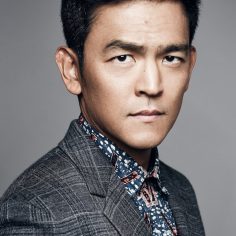