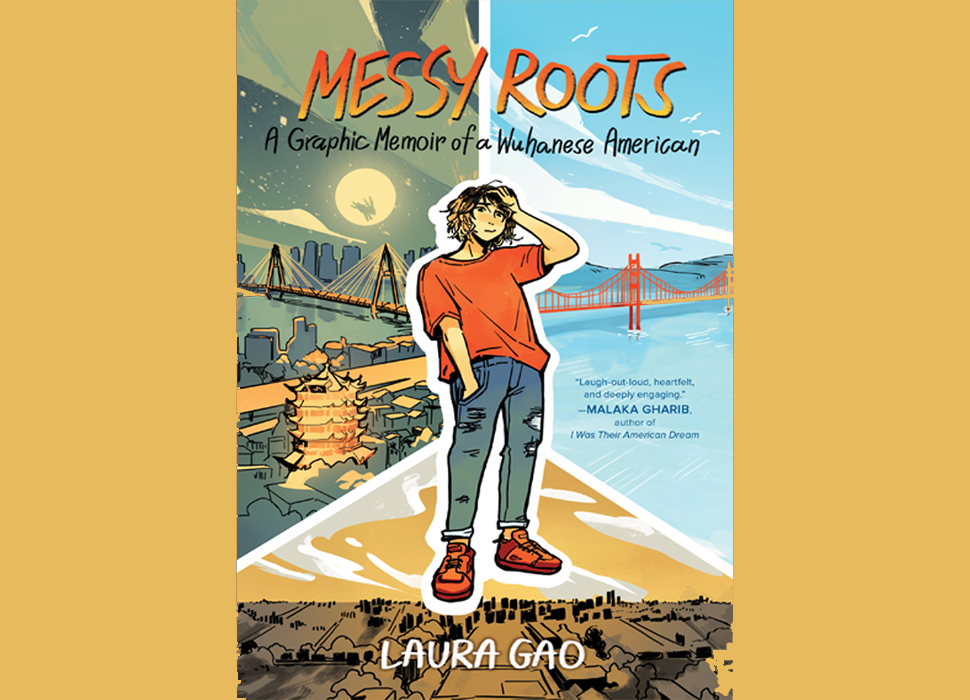 Home Arts & Culture, BooksLaura Gao Shows Us The Wuhan She Knows and More in “Messy Roots”

In 1999, a 3-year-old Yuyang fearlessly rides the back of a water bull in her hometown of Wuhan. Two decades later, Laura Gao, that same water bull rider, emerges. Her story unfolds in “Messy Roots,” a graphic memoir that details Gao’s life growing up as an immigrant and queer Wuhanese American in Texas.

“Messy Roots” has its own roots in a comic that Gao started in April 2020, just as the COVID-19 pandemic was ramping up. Gao tells me, “I was just feeling really helpless about everything that was going on, especially [with] so much of the news outlets around the world bashing my hometown, Wuhan, for something that [the people of Wuhan] had completely zero control over.” And that’s how “The Wuhan I Know” was born and went (dare we say it) viral.

Branching beyond Gao’s childhood in Wuhan, “Messy Roots” digs deep into her adolescent years in Texas. When asked what inspired Gao to continue to illustrate and write about her life, she shares, “A Chinese American mother said the comic was actually the very first thing she could share with her young daughters about what was happening in the world. She asked if I had any other stories that I could share with them too.” That DM was the catalyst for Gao to look back on her transformational journey and everything she always wanted to share with her younger self and Chinese girls like her.

Until that fateful February, Americans — including Asian Americans like myself — may have never heard of Wuhan before, one of the largest growing cities in China. With a population of 11 million, Wuhan is not the water bull wildlife it was when Gao was three. In the memoir, the rapid development of the city is put on full display on the trips that Gao takes periodically throughout the book. Going from farmlands to skyscrapers, Gao shares that her sketch of the changes Wuhan has faced was only a minuscule picture compared to the changes that her parents experienced.

She notes that there is a give and take when it comes to the city’s evolution: “One part of you is sad about the things that are no longer there, like a lot of the food stands or the beautiful countryside. But at the same time, because of how the city has developed, it’s easier for my grandparents to get around and they’re able to see my cousins and not have to wait for a half-day bus ride to get to the city.”

Just like the city of Wuhan, Gao undergoes a transformation as well. In the early pages of the book, Yuyang not only names her brother, Jerry, the first American-born in the family, but she also renames herself Laura. Like many Asian Americans, she experiences ostracization in school due to a “smelly” lunchbox full of homemade delicacies. But armed with her new name, she casts aside her mathlete status and takes to the basketball court, only to find her true self once she attends the University of Pennsylvania, makes Asian friends, comes out as queer, and moves to San Francisco.

Along the way, Gao displays the innate diversity of the Asian American community. Asian Americans show up as individuals with unique backgrounds and experiences, whether it’s her brother Jerry and her immigrant parents — who enforce an on-brand type of Asian parenting — or her first friend in college, a Korean girl who grew up in Shanghai, and her first girlfriend, a girl named Valerie who she met at an Asian and queer mixer.

At its core, “Messy Roots” is a love letter to those Asian American kids who don’t feel like they belong and it’s a clear message uplifting our culture in a time of anti-Asian hate and violence.

“The number one message is for anyone that feels like they’re marginalized in any way to feel that they have the agency to make a home of themselves, no matter how messy their roots are,” Gao says. “I want folks to be able to also talk about these hard issues with their friends and classmates and especially in the context of the current world.”

Grab your copy of “Messy Roots” on March 8. Laura Gao is a queer artist, author, and bread lover. Originally from Wuhan, China, Gao immigrated to a small town in Texas when she was four. Besides drawing and complaining about early onset back pain, Gao enjoys living nomadically and biking around the world, designing apps for nonprofits, bakery-hunting, and watching SNL.