How Jonny Sun Evolved by Learning to Say “Goodbye, Again” 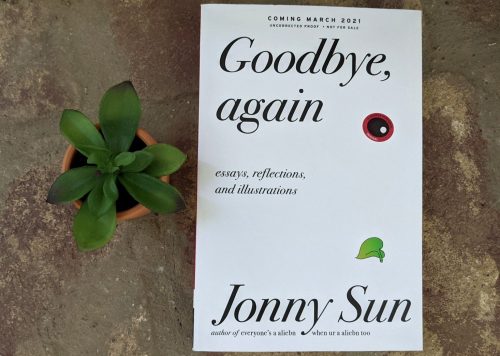 Jonny Sun isn’t the same as he was four years ago. But then again, none of us are.

When we first spoke in 2017, Sun had just written his first book, “Everyone’s a Aliebn When Ur a Aliebn Too,” and was running a successful comedy Twitter account. Some things remain consistent: Sun still runs his Twitter account and admits, “I’m still in the middle of a Ph.D., so I can’t claim I’ve done that one yet.” But the success of his first book set him on an unexpected trajectory.

In 2021, the “nice Jonny update” (inspired by the “nice leaves updates” he shares on Instagram) includes several professional highlights and personal milestones: co-authoring a book with Lin-Manuel Miranda, writing for Netflix’s TV series “Bojack Horseman,” and getting married. Breaking into the TV and film industry has been the biggest change in his life. While he’s writing for the big screen, his latest project is his first in a three-book deal with HarperPerennial: “Goodbye, Again: Essays, Reflections, and Illustrations.”

Whereas “Everyone’s a Aliebn” is a graphic novel that follows Sun’s alien alter ego Jomny, “Goodbye, Again” comes from Sun’s perspective as a real-life human. After the positive reception of his first book, the natural thing to do might have been to follow up in a similar vein, but he approached his publisher with a new proposal. “I’d always wanted to do something written, and there was this idea in my head, not of a topic, but a form to explore for this second book,” he says.

His publisher agreed on a book of essays and from there, the amorphous concept began to take shape. For months, Sun made time to sit down every day to write. Eventually, he had about 200 to 250 half-written essays or idea sketches that he whittled down. “It was taking that and finding the common threads, sifting through everything to figure out what the focus of this collection should be.”

Sun has been open about his mental health in his work, so it’s no surprise the topic takes center stage in “Goodbye, Again,” acting as the glue across the subjects he explores. However, it wasn’t always this way. “Growing up, I never felt like I had the right ways to speak about it openly, and I think a lot of that was the times and the different worlds I was in,” he considers. One of those worlds was engineering school, where Sun remembers how being burnt out and miserable was perceived as a badge of honor. But there came a point where he realized this way of thinking was hurting him.

In the last four to five years, Sun started focusing on his mental health, including seeing a therapist. The more he was able to talk about his anxiety and depression, the healthier and freer he felt, and that translated into his work. While he acknowledges that his journey is still a work in progress, his transparency around mental health has made a “world of difference” in giving him the tools to deal in better ways — and to help others: “The more other people can approach me and talk to me about what they’re going through, it feels so positive, healthy and just freeing to be able to do that.”

Writing has also helped in acknowledging this personal change. While Sun’s first book examined the idea of loneliness through the premise of an alien coming to Earth as a stranger, this one expands on his understanding of it by delving into related territories.

For example, loneliness sometimes comes from productivity, as Sun writes in the essay “Busy/Lonely.” In addition to those milestones from the past four years, he’s managed to complete projects like developing an interactive installation called “The Laughing Room” at Cambridge Public Library, hosting a TED Talk, and illustrating for “The New Yorker.” His latest started as a deal with himself to work less. But slowly, quiet moments turned to hoarding ideas, which turned into writing and then the book itself.

“Somewhere, that desire to have [some] proof that I was taking time off turned into the idea that this needed to be a project,” he writes in his foreword, “that my time spent not being ‘productive’ had to have a product [to] be worthwhile.” Given the number of times we use the word in our conversation, it seems that sometimes “work” feels synonymous with “love” these days, especially in creative industries — a fine line between catharsis and burnout, rest and exhaustion.

Though Sun thinks a lot about everything he does, you can tell he takes extra care in connections. Talking on the phone with him feels like speaking to an old friend who somehow remembers our conversation nearly four years ago. It’s this care that he brings to the pieces featured in “Goodbye, Again.” Behind his myriad of projects, Sun turns to cooking and plant-parenting as part of his self-care. (In fact, he and his wife also recently started The Sun Kitchen, a pet project where both share recipes they’re trying and music they’re listening to.) While these are made up of small moments in life, he features them prominently in his essays.

In one, he remembers the tree that still stands outside his therapist’s office during a visit to Cambridge. Another illustrates, quite literally, a seemingly mundane, but anxiety-ridden decision to buy two or three rolls of paper towels. Even the book description teases “a recipe for scrambled eggs that might make you cry” (and it’s not wrong). The book bubbles up memories of MSN Messenger from Sun’s high school days and the meals he used to share at the restaurants he would visit with his parents. While the pieces capture the details that we may overlook every day, they represent something much larger and often existential. It’s like reading a journal that, at the same time, feels relatable and universal.

By zooming in on minutiae and shared experiences, Sun unpacks looming questions around events that can be hard to grasp. One essay equates his plant leaves dying to bigger ideas of grief and loss, including control over life. “Coming from a comedy perspective, I think there’s something almost funny in how our dumb human brains are able to take such small things and anxiously spin them out into giant things.” With that, Sun suggests, a goal of the book is to argue that big, life-changing moments don’t necessarily define how we reflect and change and grow; the tiny moments can be just as, if not more, valuable and illuminating.

It’s the reflection on these memories that helps Sun cement an old version of himself and accept the final layer of the book: the goodbye. Through these stories, he captures those “murky, shapeless ideas” and crystallizes them on paper. Now that it’s in the book, it’s outside of him — preserved. “It’s like taking a picture of myself at a certain moment,” he contemplates.

Goodbyes are complex. Some are permanent; others are temporary. A goodbye may signal closure, but it doesn’t necessarily mean an end. There’s loss and grief, but there’s also opportunity. By archiving these feelings, Sun says, he’s able to clear out some space within himself to grow in new ways and new directions. His understanding of himself and the world around him is ever-evolving.

Of course, the pandemic has played a large role in giving him a new perspective. For example, Sun mentions that for a while, he and his now-wife were in a long-distance relationship. Though they were physically apart before, they’re now married and quarantining, isolated from the rest of the world. “It’s kind of funny … [tracking] how loneliness feels in different contexts that it shows up in,” he muses.

But it’s this lens that reinforces Sun’s exploration of growth. “Going through this intense, traumatic, and deeply sad and upsetting period in our lives, we’ve been forced to change into different versions of ourselves,” he says. Though the essays in the book were penned before lockdown, Sun has been revisiting them now as part of the editing process. He’s only recently finalized the book for printing, but he views this refining period as returning to somebody that he was forced to grow away from. “[It’s] let me focus on the stuff that used to be and how that’s no longer part of me, the elements of my life and our world that have shifted in such dramatic ways.”

During the pandemic, with so much taken away, Sun has had to focus on the smaller joys to find peace. And in some ways, the book is his way of doing so, while also providing some peace to his audience. Each essay is dummied to abstract emotions and serves as a stolen moment for the reader, a small break from life, or as he sets up in the foreword, “an acknowledgment that we are all burned out.”

Even as he’s grown in the last four years, Sun still finds a lot of ambiguity and some imposter syndrome to grapple with every day. But time — and a lot of introspective thinking — has provided at least a little clarity. With age comes wisdom and, maybe, an acceptance of self. “I’m at least more comfortable with this feeling [of terror and uncertainty] because it’s been around for longer, and I think that’s probably as close to certainty as I’ll feel,” he says.

Still, he laughs, “It still feels like I have no idea what I’m doing. I’m just trying to figure it out and have a million questions about what I’m supposed to be doing at any given point.”

Jonny Sun’s book “Goodbye, Again” comes out on April 20, 2021 from HarperPerennial. You can find him on Twitter and Instagram at @jonnysun.