Home Arts & Culture, Books, Winter 2022The Stories of Eva Chen and Sophie Diao Radiate in “I Am Golden” 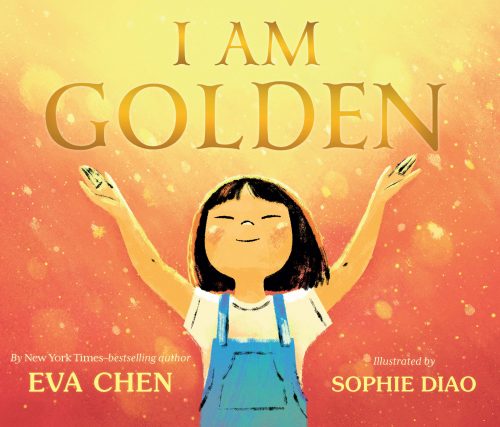 In the wake of COVID-19 and xenophobic references to the “China virus,” anti-Asian sentiment and hate crimes dramatically increased in 2020 and 2021, rising 77% since 2019. We were stunned by videos of our elders being brutally attacked and feared for the safety of our parents and grandparents who resembled those in the footage. As individuals and as a community, we grieved, we cried — and then we fought back in a way that reflected the collective nature of many Asian cultures.

Neighbors watched out for one another. Artists expressed their anguish and cultural pride through murals and artwork calling to #StopAsianHate. Online discussions about advocacy and solidarity groups became avenues for action and comfort.

During that period, author Eva Chen and artist Sophie Diao were individually processing their responses to the hate crimes and, specifically, the Atlanta spa shooting. Diao sketched a comic the morning after the shooting, which Chen stumbled upon just as she was seeking an illustrator for her new book. The two connected and birthed “I Am Golden,” (Feiwel and Friends, 2022) a children’s book that celebrates being Chinese American, the strength of the immigrant story, and the joy of being fully yourself.

The book, centered around a girl named Mei, describes the immigrant experience and the othering of being Chinese American from the perspective of Mei’s parents. But in the midst of pain and loneliness, Mei learns that she can draw on the golden flame within — a flame that burns from the strength of dragons and phoenixes, the beauty of a lotus flower, the distinct talents of famous Asian Americans, and the sharing of family stories over plates of noodles and baos. She is golden because of the rich culture from which she hails.

Chen, a children’s book author and vice president of fashion partnerships at Instagram, grew up straddling two worlds as a first-generation Chinese American — speaking English and obsessing over boy bands with friends and then switching to Mandarin and shopping in New York City’s Chinatown with her parents. This was in the ’80s and ’90s when conversations about race were scarce. When Chen passes her former school playground, she relives the memory of another student pulling back the corners of his eyes and teasing her in a sing-song voice. Decades later, the memories still sting.

Likewise, Diao’s childhood was steeped in Chinese culture, conversing with her parents in Mandarin, watching Chinese TV, and attending Chinese school. Yet that strong cultural identity didn’t protect Diao from the isolation she felt as her family moved frequently, and she often was the sole Asian in her classes. Classmates and teachers noticed her differences, highlighting her otherness.

Similar painful experiences have resurfaced for many in the AAPI community over the past two years, bringing sorrow but also a revived connection to our racial identity and culture. Chen recognized that being Chinese has become an even bigger part of who she is. “[The acts of violence] made me examine my own upbringing and feel closer to who I am — and be even louder and more declarative and proud to say I’m Chinese,” Chen said.

As she saw horrific acts being inflicted on elderly Asians, she urged her parents to protect themselves but also sought a deeper understanding of their immigrant experiences. Her mom struggled most with the loneliness of being in between worlds. That conversation opened Chen’s eyes to see that her parents’ sacrifices — their comfort, their belonging, and their identity — were all for their children. That realization became the seed for this book. “I wrote the book to celebrate their story, as a love letter to my parents, to their dedication, strength, and commitment to their family,” Chen said.

Diao also approached this project with her parents in mind, turning “I Am Golden” into a visual tribute to them. “Working on the book made me think about my early childhood,” Diao recalled. “I’ve sprinkled visual motifs that remind me of my family. Every single thing I drew in the book has some root in one of my experiences growing up.” Mei’s mother wears red, a nod to Diao’s memory of her mom always wearing a red sweater with a knockoff Snoopy graphic. Diao’s father, who often wore an olive khaki jacket, inspired a similar top for Mei’s father.

Another Easter egg is the flyswatter that Diao drew into a scene with Mei’s grandparents. “During my summers in China, we stayed at my grandma’s house, which was a very classic Sanheyuan Chinese compound — three tiny buildings surrounding a small central courtyard with plants,” Diao described. “The doors had beaded curtains to keep flies and mosquitoes from entering when people passed through. Invariably, bugs would get in, so we always had a flyswatter handy.”

While the cultural connection for children often begins with the external — the food, language, and traditions — identity is rooted even deeper. Diao acknowledged that, for many years, her cultural identity was intertwined with her relationship with her parents and family. Several years ago, when she adopted a vegetarian diet, she grieved giving up Chinese foods of her childhood, like pig trotters and red braised pork belly.

“I had this weird feeling that if I stopped eating meat, I would be less Chinese,” she explained, elaborating that she feared losing a commonality with her parents if she didn’t eat meat dishes with them. “I eventually realized that my identity has nothing to do with what I choose to eat or what hobbies I have, or what my name is, or any other way in which I interact with the world. It’s a lot deeper than that.”

While not explicitly stated, “I Am Golden” also is a love letter to Chen and those of her generation who are now reading to their young children. As a child, Chen didn’t see her experiences or appearance reflected in many books, and writing this fulfills reassurances that she craved when she was younger.

“Because a book like this didn’t exist, I cobbled together experiences from various girls in books for me — Ramona, Matilda, Hermione, Claudia, Francie (points if you know all the references!) — to create the ultimate icon of girl power for me,” Chen said. Her bibliography includes books about Juno Valentine, a young girl who discovers a magical closet that introduces her to historical and present-day women powerhouses through their wardrobe and the barriers that they’ve broken. Juno esteems the fashion and inner strength of women like Maya Lin, Grace Jones, Simone Biles, Josephine Baker, Sally Ride, and more. “I Am Golden,” however, takes that empowerment a step further, as Chen’s most personal book to date.

“I Am Golden” joins a growing list of picture books, like “My Day with Gong Gong” and “Eyes that Speak to the Stars” (Joanna Ho’s companion book to her well-received “Eyes that Kiss in the Corners”), written by Asian American authors so that children growing up today — and their parents — can proudly see themselves and their rich cultural heritage mirrored in books.