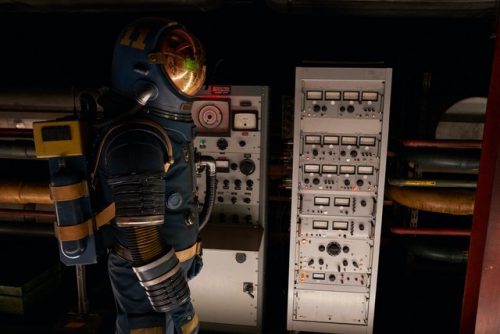 HBO Max’s latest dystopian miniseries “Station Eleven” (released Dec. 16, 2021) tells the stories of survivors of a devastating flu that turned the world upside down. Sound familiar? Based on the 2014 novel of the same name, the 10-episode series goes back and forth between different characters’ perspectives, pre- and post-apocalypse. It’s a captivating premise for us viewers who are still living through the COVID-19 pandemic, and the post-pandemic world that parallels our own comes to life through its innovative costumes.

We had the opportunity to chat with the woman behind the entire look of this post-pandemic world: Helen Huang.

Huang is an Emmy– and CDGA Award-winning costume designer based in Los Angeles. Known for her most recent work for “Station Eleven” and Apple TV’s “The Shrink Next Door,” her other credits include “Holidate,” “Tall Girl,” and “Rim of the World” for Netflix. She also designed for FOX’s “911,” NBC’s “The Night Shift,” FX’s “American Horror Story: Roanoke,” and MGM’s “Get Shorty.”

Her career began in the fashion editorial world and commercials. However, it was through scripted TV and film that she found her true calling, as it combines her love of art and storytelling. She relies heavily on historical reference, literature, and fine arts for her projects, but is greatly inspired by the study of people and cultures. Her north star, so to speak, is to draw inspiration from real life because life itself is always stranger than fiction.

As we chatted with Huang, we learned what it was like to design this fictional post-pandemic world during a real-life pandemic. Continue reading to delve deeper into her process, her favorite costume on the show, and what’s on the horizon for Huang.

IP: Can you walk us through the creative process for “Station Eleven”? Do you have the same approach with every project, or is it different?
HH: My creative approach is always the same. I first go through the script and analyze it. Then I usually have extensive conversations with the director or creator about the project to further pinpoint what they’re thinking and what their aesthetic goals are. I’m a very visual person, so I take the information from the script and conversations and compose a visual deck (mood board) for what I think costumes on the project should look like. The visual deck can contain images from photography, art, [and] film; and often the images are not necessarily always about the clothing. What I’m trying to achieve and communicate is the overall feeling and perspective for what I’m working on.

For “Station Eleven,” I wanted the costumes to read realistic and surreal at the same time. I also wanted to showcase a world of art, creativity, and humor, even when the people in “Station Eleven” were going through dire times. The other unique thing about “Station Eleven” was the switching back and forth between the different timelines — traveling from the present to the future. There were also many makeshift cultures and subcultures that existed in the future. So we started by trying to find the vocabulary of how to differentiate these groups.

I really thought about how people dress when they have resources versus when they don’t have resources. I looked at photojournalistic pictures of people all around the world to see the nuances between how creative people dressed, how nomadic societies dressed, and what people wear to address practical and environmental needs. Even though the future elements of “Station Eleven” can be surreal, I wanted to ground the world in reality and then build outward.

IP: As you’re designing, are you thinking of the character arc, or are you focused on where they are in the current episode?
HH: You have to think of both in order to be successful. The arc comes from the overall script or episodes if you’re doing a TV show. When I start a fitting, I will have notes on the general arc of the character as well as arcs for the show. I will always talk to the actors about them and together try different solutions to express the arc.

But big arcs are only half the story. Attention must be paid to what is happening in each scene in the episodes. The decision for the clothing chosen for those instances can range anywhere, from what space the character is in to how the characters are interacting with each other in the sequence.

IP: When designing this project, did you get any inspiration from current events, i.e., the  pandemic and COVID-19 world?
HH: We did episodes 1 and 3 before the pandemic hit and the rest during the pandemic. There were some things I observed during lockdown that I included in the final product, like how people returned to craft and how making things became a coping mechanism.

IP: How was it collaborating with director Hiro Murai?
HH: Hiro is wonderful. He’s the perfect collaborator. He’s alway accessible and present. He is a great communicator and listener, but most of all he trusts his department heads. He would give notes on the general feelings that he wants to convey, but he really trusts his department heads to come up with the answers.

IP: What are the differences between working on a limited series and a feature film? Do you use the same process?
HH: TV is much faster. We were block shooting, so it was like we were working on a huge movie but with only half the prep time. Aside from that, everything is the exact same. It still takes as much dedication.

IP: What was the biggest challenge for you while working on this show, considering it has parallels to how we’re living at the moment?
HH: A big part of making this show was the experience of prepping and shooting in the middle of a pandemic. We had finished two episodes before going down for a break and then the pandemic happened. After that, they moved the production to Toronto, which was in lockdown. So we were facing a lot of issues with how to get our hand on the resources we needed in order to get the designs on screen. It forced us to problem solve in unconventional ways. Thrifting became a big part of the solution because only secondhand clothing warehouses would let us in to shop. About 70 percent of the clothing on the show is thrifted, and that included most of the components for the play costumes. We used everything we could find. Cardboard, plastics, blankets, toilet paper rolls; you name it, we used it. In the end, due to our fantastic team of shoppers, tailors and ager/dyers, we were able to produce a visual product that is this amazing combination of human innovation and problem solving — much like the characters in the show itself.

IP: Do you have a favorite costume on the show?
HH: Dr. Eleven’s is my favorite costume because it was a big design feat. I drew and had my  costume illustrator redraw so many variations. On top of that, we had many challenges of fabricating it into reality. It was a fantastic lesson in design meets function.

IP: Now that “Station Eleven” is complete, would you change anything or keep everything the same?
HH: Of course I would have liked more prep time, and more time to camera-test things, but as a whole, the show came out so beautifully. It’s an amazing achievement by a whole team of dedicated costumers and artisans.

IP: Do you have a preference in the projects you do, i.e., period piece or contemporary?
HH: I used to say that I love it all, as long as the show or film has an interesting point of view. But now, I am leaning towards period/ fantasy/sci-fi. I love fabrics and constructions and working with artisans. It’s incredible to make clothing from the ground up, to think of new ways and visual concepts to describe characters and worlds. So I would love to explore more projects like that in the future.

IP: What are you looking to design next?
HH: I’m on a project called “Beef” that I am really excited about. It stars Steven Yeun and Ali Wong.