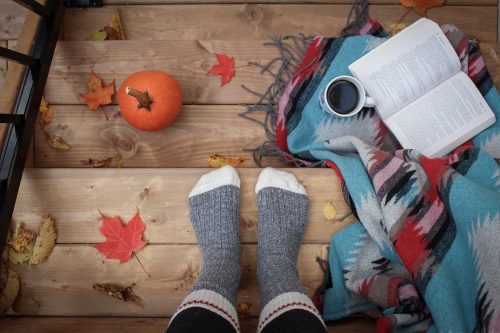 We are full swing into cozy season — think pumpkin spice instant ramen and knitted sweaters. Here are six books we are cozying up to this fall.

Alice Wong is an alien mutant from a faraway planet — or so she claims in “Year of the Tiger.” The much-beloved activist and editor of “Disability Visibility” has finally written her memoir for all those asking. But as per usual, Wong does not abide by convention. And why should she? Disability has long held the potential to break and disrupt capitalist, white, ableist structures, but nevertheless, disabled people are often put in a box and asked, “How can we make your life more normal?” (Normalcy is a boring scam, people!)

“Year of the Tiger” reads as a scrapbook of sorts, filled with images and pictures and essays. Pulling from Wong’s previously published articles and interviews, Wong’s prolific nature shines through — it’s not that she can’t write your standard memoir, she just doesn’t want to. From being the “Angry Asian American Disabled Girl” growing up in Indiana, bucking the model minority mold, to snapshots of surviving the COVID-19 pandemic, Wong puts on full display the vibrancy of and the threats to living as a disabled Asian American. And she doesn’t do it alone. While the memoir’s focal point is Wong, she weaves in a multitude of voices from family to friends in her interviews, showing that no one is truly independent.

Ling Ma’s new short story collection might not have the same apocalyptic stakes as her debut novel “Severance,” but it does have the same uncanny melancholia. The stories in “Bliss Montage” display the range that Ling has as a writer — in one, the main character lives with all her ex-boyfriends (content warning: domestic violence); in another, two friends trip on a drug that makes them invisible. Although not always clearly stated, narratives revolve around female and/or Chinese characters — at least, that’s how I imagined them.

My personal favorite from the collection, “Tomorrow,” follows a pregnant woman named Eve whose fetus’ arm experiences a preterm birth — yes, only its arm. The story is set in a post-American world where countries around the world are disavowing anything and everything from the U.S. colonist regime (think: goodbye, Kentucky Fried Chicken!). In it, Eve goes to China to be with an aunt, running away from work and her baby’s father to bond with her future baby’s arm.

Reading “Bliss Montage” is like eating an orange with chocolate hidden inside. You think you know what you are getting yourself into because the scenario feels familiar but then becomes unexpected, even somewhat disturbing. Nevertheless, it is an altogether rather satisfying combination that must be experienced to be understood and shared. The short story format works well for readers. My advice: Take “Bliss Montage” in bites rather than whole. — G.O.

Set in a not-so-alternative reality where American patriotism and surveillance turn against East Asians in our country, “All Our Missing Hearts” follows a boy and his mother as they find their way to one another. What would happen if anti-Chinese sentiments gained traction? In Celeste Ng’s fictional world, the Preserving American Culture and Traditions Act (PACT) is put into place after a devastating economic crash that is ultimately blamed on the Chinese government. PACT “outlaws the promotion of un-American values and behavior” and also promises to protect children. Silencing dissent, the law targets East Asians and their allies, but also separates children from parents who are unfit — read: unpatriotic. Ng’s premise is not so unrealistic; many groups in our nation have been subjected to targeting by America’s white supremacist design, including Muslims in the aftermath of 9/11 and other Asian American groups throughout history.

The plot focuses on Bird Gardener and his Chinese mother Margaret, a poet who has been forced into hiding. Margaret is just a model minority Chinese woman thrown into the rebellious uprisings after a line from her poetry is used by a protestor who gets shot and killed. Through Bird’s quest to reunite with his mother, we learn about how the oppression and struggle for equality faced by Chinese people is one bound to the struggle of other BIPOC folks. I would venture to say that “All Our Missing Hearts” is the first time that Ng tackles the issue of race relations in America head-on. In her commentary about her previous novel “Little Fires Everywhere,” Ng shared that she always imagined the main character Mia to be a person of color, but did not write race in because she did not think she “could represent, or should represent, a Black woman’s experience or a Latina woman’s experience.” Of course, the Hulu adaptation casts Kerry Washington as Mia and fills in the rest. But this novel really hits the nail on the head when it comes to race — some might say a little too hard — and being a person of color in our (white supremacist) nation.

Ng displays her knack for storytelling and world-building in this one, a thrilling adventure novel seen through the eyes of a 12-year-old boy. There is a certain sadness throughout but not one devoid of hope or the possibility for change. It is interesting to see Ng once again hold a mirror to our truths but on a much grander scale than she’s ever attempted before. — G.O.

Calling all foodies for “Blackmail and Bibingka,” the third installment in Mia P. Manansala’s cozy Filipino American murder mystery series! Tita Rosie is thrilled with the return of her prodigal son just before the holidays, but Lila knows that wherever Ronnie goes, trouble follows. Ronnie is determined to prove himself by introducing lambanog, a Filipino coconut wine, to Shady Palms with the help of his business partners and investors, even when he becomes a person of interest in a murder. Be sure to read the author’s note for trigger warnings, such as police corruption and addiction.

It’s not a problem if you haven’t read the previous books in the Tita Rosie’s Kitchen Mystery series. It could be read as a stand-alone—although you’ll miss out on more mouth-watering scenes (recipes included!) and an irresistible love triangle. The author updates the reader on essential information with the diverse and loveable cast (re)introduction.

As a Filipina American whose family lives in the motherland, I love reading about the Macapagals. They gossip with reckless abandon, extend care to honorary family members by feeding them tons of food, and defend each other yet never hesitate to reprimand disruptive behavior, all while dropping in the occasional Tagalog. The author creates an intimacy in her writing that can only be called familial. If you’re looking for a breezy, thoughtful mystery with a kernel of family love, then this savory series is for you. Manansala’s mysteries demand to be devoured. — Dorilyn Toledo

How can we sustain integrity and pleasure during late-stage capitalism rampant with racism and institutional brutality? That is the guiding question in a series of intimate and revealing conversations between 21-year-old Asian American, Reed, and his mother while he’s back in Los Angeles for his halmoni’s last days. Hyperaware of his “model minority” status, Reed wants to use this privilege to dedicate himself full-time to the Black Lives Matter movement by dropping out of Columbia University. Informed by the author’s own conversations with his parents and other former organizers, Reed complicates his thoughts on solidarity, visibility, and care, all while working on his “fear of getting dragged.”

This novel is like your older cousin—hilarious, audacious, a tad condescending yet wise and gentle, and undoubtedly connected to you. Since they’re older, they discovered the family secrets a little before you did and they may know a few more tricks. But, they won’t hesitate to pass them on to you.

I recommend “Which Side Are You On” for those looking for a politically-charged coming-of-age story. The novel reads almost like a memoir. New organizers and Twitter personalities may benefit and relate the most. I hope you argue with the novel, listen to its themes, and sit with its wisdom. — D.T.

Fabulism. Academic rivals. Boarding school mischief. “The Secret History” meets “Today Tonight Tomorrow” in this debut YA novel by Ann Liang. A Chinese American girl must stay on top of her classwork at her elite Beijing school chock-full of rich and influential nepotism babies, as the only one in her class on a scholarship. Or rather, half scholarship. Unable to pay the rising tuition rates, she can’t see herself reaching her ambitious dreams without her school’s connections. Then suddenly no one can see her.

“If You Could See the Sun” follows Alice Sun as she starts to monetize her invisibility, enlisting help from the other top student at school. Readers will be seduced by the possible academic rivals-to-lovers arc but stayed for Alice’s personal journey. The novel would be a great fit for younger readers who recognize they crave academic validation. Students will find Alice relatable as she stresses over her exams because she believes her future is contingent on a single test, every single time. However, anyone from a working class, immigrant background will ache in understanding over the family sacrifices and an existence in borderlands, being from neither here nor there. — D.T.