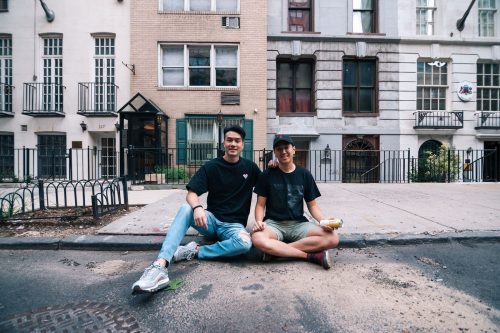 Ever since the White Claw explosion of Summer 2019, hard seltzer has almost become as ubiquitous as a can of beer. The hard seltzer industry is booming, with almost every major beer producer hopping on that wagon. And yet, with almost endless choices and brands, we’re still seeing the same renditions of tropical citrus.

Fortunately, we’re also seeing more and more Asian American entrepreneurs bringing refreshing (literally) creativity to the industry. Kevin Wong and Sean Ro, the co-founders of New York-based Lunar Hard Seltzer, set out to launch Lunar with one thing in mind: their cultural identity. Their goal was to deliver a hard seltzer utilizing flavors of their childhood and their heritage — a drink that was entirely and unapologetically Asian American.  If you’re like me, and you grew up eating strawberry Pocky and pineapple cake and drinking Yakult and Calpico, these drinks are for us.

One night, over a meal of Korean fried chicken, Wong and Ro realized a proper beverage pairing was severely lacking. Drinks like Bud Light and Rolling Rocks didn’t quite complement dishes like tteokbokki (Korean rice cake) and garlic soy chicken. This ignited a passion to create a drink that would pair harmoniously with any number of dishes, from Korean fried chicken to our parents’ home cooking.

“Our mission is to define, promote and inspire what it means to be simultaneously both Asian and American,” Wong says. “Our vision is to inspire Asian Americans — and, more broadly, the world — to love and embrace their identity, their culture and heritage, their beliefs and ultimately themselves.”

For those of us who grew up in that weird, in-between “otherness,” we get it. To the rest of America, we appear too Asian, exotic, other. But when we visit the motherland, we’re foreigners; we are too American and not Asian enough to belong. We’re the third culture kids, the children of immigrants, the ones who grew up speaking a language other than English at home. We straddle two different worlds, trying to find our own middle ground.

Ro, a Korean American, says, “being Asian American is its own unique thing.”

Wong, a Taiwanese American, elaborates on his own experience as a third culture kid. “As children of immigrant parents, we spend a lot of time reflecting on how we grew up and how we understand and continue to explore our identity as Asian Americans. And there are moments in our lives that have stood out to us, from asking my mom to pack sandwich school lunches for me instead of rice, fried tofu and mao dou, to getting into college and seeking validation from the frat scene by trying to dress ‘preppy.’ But the truth is we are not a monolith — there are so many facets of our complex and beautiful hyphenated identity.”

The melding of Asian and American cultures encapsulates the third culture experience. Representation matters, even in the alcohol aisle of the supermarket. We may finally see beverages that are partially representative of our identities at Target or Ralph’s, and not just at specialty markets and Asian grocery stores.

The Quest for Authentic Flavors

With other companies describing themselves or their products as being “Asian-inspired,” Wong and Ro wanted to differentiate themselves by creating something that reflected their Asian American experience, and not something merely inspired by Asian cultures. Ro grew up drinking yujacha, a citron tea that his parents would make for him and his sister on cold winter mornings. In his college days, Ro would often return to school with jars of yujacha. Meanwhile, Wong’s family bought lychee jellies in bulk from the Asian supermarket every summer. They were sweet, delicious and best when frozen.

For Asian American Pacific Heritage Month this past May, Lunar collaborated with local eateries in New York, like Di An Di and 886, and designer Vanessa Nguyen to launch their “Heritage” line. This lineup included bolder flavors that ventured beyond typical Asian fruit, and instead celebrated complex flavors that paid tribute to each partner’s collective AAPI heritage.

Tamarind & Rice Paddy Herb was inspired by Vietnamese sweet and sour soup and developed with the owners of Di An Di, which specializes in modern Vietnamese fare. The drink features the sharp, citrusy flavor of Ngo om (rice paddy herb), often used in Vietnamese cooking, with tamarind paste, sourced from India. Mango & Chili Salt was based on Wong and Nguyen’s trips to Thailand and Vietnam, where fruit carts are loaded with fresh green mangoes dipped in salt, sugar and chili pepper. Pineapple Cake, a popular and beloved pastry in Taiwan, was a collaboration with the Taiwanese American owners of 886, and is the first hard seltzer to feature MSG (which isn’t actually bad for you!) as an ingredient.

“We’re starting with beverages that feature flavors deemed ‘exotic’ to the western world yet are personal and familiar to our community,” explains Wong. “And by doing so, we hope to raise the awareness of Asian America with the world and become that platform and connector between communities.”

Lunar launched pre-COVID, pre-2020 shit-storm, pre-escalated hate against the AAPI community. At the time, Wong and Ro didn’t foresee just how difficult it would be as an Asian American company with their brand built on their cultural identity.

Lunar’s social media page has received racist and hateful comments and messages, leaving Wong and Ro wondering how they can continue standing up for and supporting their community, despite feeling drained over the escalation of hate. One of their commitments, as posted on Facebook, is to respond to racism by being “more courageous and continue to speak up, stay educated, and look out for one another.” The company also donates a portion of their monthly proceeds to non-profit organizations supporting AAPI communities, but “with each new headline, we always think ‘Is this enough?’ followed by ‘How do we grow faster so we can do more?’”

But by simply launching this company, they’re making their mark in a white-dominated industry. Ninety percent of brewery owners are white while only a staggering 1.9% of brewery owners are Asian. It’s especially worth noting, considering that Asian Americans are the most engaged drinkers across the whole beverage alcohol industry, according to Nielsen.

Wong and Ro have found success through Lunar, but not merely as a business venture. Their mission remains to authentically share not only the flavors, but also the experiences of the Asian American community. Lunar has been an opportunity for them to take pride in their cultural identity, support the AAPI community during a traumatic time in history, and represent their heritage in the brewing industry. And through taglines like #AsianAmericana and #ThisIsHome to represent their brand, they are increasing solidarity and continuing the conversation with their audience during a time when our communities need it the most.

You can find Lunar Hard Seltzer here. They ship to most states, and you can also find them in some brick-and-mortar stores and restaurants in New York, such as H-Mart, Foodcellar, 886, Di An Di, and more. You can also follow Lunar on Instagram for all the latest info.

The next time you’re picking up something for a summer BBQ, check out and support these other AAPI-owned brands: 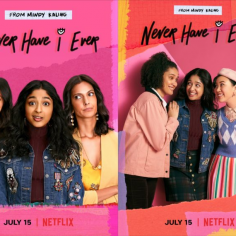 “Never Have I Ever” and the untold minority perspectives

Imagine looking in a mirror, desperate to see your own reflection but instead seeing someone else every...