Peeling Back the Layers of Asian American College Dance Teams 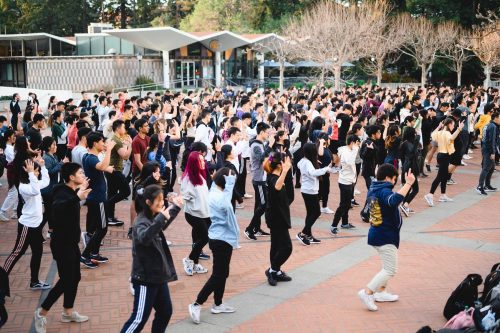 On campuses like University of California, Berkeley, it is not uncommon to walk by a herd of students moving their limbs in unison to hip-hop music. You might see them dancing in front of lecture hall buildings, in parking garages, and in brightly lit hallways in front of a window that doubles as a mirror at night. You might hear the scraping of knees and scarily synchronized stomping against the concrete pavement, passionate breaths as dancers shuffle through blocking positions, and shouts of “from the top!” that dancers know all too well.

Needless to say, the formidable size of these predominantly Asian American dance groups has swallowed college campuses everywhere. In the Fall 2018 semester alone, there were 704 members in just one of these dance organizations at UC Berkeley called AFX. At least one in every 15 Asian students at Berkeley has been involved in these on-campus dance teams, and for a school that consists of nearly 30% Asians, the statistical magnitude is hard to ignore. Other campuses like UCLA and UC Irvine also boast high percentages of Asian student participation in their dance teams.

Why are these student-run dance teams so popular at universities? For many Asian American students, it is about social belonging. Taylor Wang (22), a member of a competitive dance team at Berkeley, says, “As an activity-based club with completely open membership, [AFX is] a change from all the professional clubs on campus that have multiple rounds of interviews and resume screenings just to get in.” Like moths drawn to a flame, dancers and non-dancers alike are sucked into the world of collegiate dance teams because of the low barriers for participation and the ease of making new friends in this tight-knit community.

Alice Wang (21), who has been dancing since she was 5 and is a member and director of multiple competitive dance teams at Berkeley, says, “[Dance] brings people from all walks of life [together] and allows them to bond over a form of expression… Many people who join a dance organization feel that they can connect beyond barriers of language, ethnicity and socioeconomic status.” Thus, many Asians at these college campuses gravitate toward these dance teams for their welcoming inclusivity, and stay in them for the long run because of the unbreakable bonds they form, not only with each other but also with dance as an artform.

In addition to the relationships built from each dance team, dance has served as a channel for Asian Americans to defeat stereotypes and social barricades stacked against them. Alice Wang describes that “in general, dance imparts greater self confidence which is at odds with a bookworm stereotype.” In a similar manner, Taylor Wang addresses the fact that Berkeley is known for being both Asian and “nerdy,” but these dance teams reveal the diverse sides of Asian students that are not confined to the stereotypical dimensions in which society tends to compartmentalize them.

Historically speaking, underground breakdancing has existed for decades in countries such as Japan and China, and it similarly sprouted from the desire of self-expression and social resistance, as it was often used in the face of colonialism and oppressive regimes. In 1992, a Korean American promoter named John Jay Chon brought a VHS tape of an American breakdancing competition to Seoul dance groups, which led to breakdancing crews and battles spreading like wildfire. In 1984, a hip-hop dancer by the name of Crazy-A pioneered breakdancing in Tokyo’s Yoyogi Park in Japan. However, it was not until the founding of Kaba Modern by Arnel Calvario at UC Irvine in 1992 that marked the birth of Asian American “urban” dance culture.

This brings us to the present, where video-sharing apps and forums have propelled Asian representation in dance forward on a global scale. Ever since the San Diego-based Jabbawockeez, consisting of Chinese, Vietnamese and Filipino dancers, won the first season of America’s Best Dance Crew in 2008, the Asian American presence in dance has only grown. Sean Lew, a dancer of Chinese and Japanese descent, won international recognition as a finalist with Kaycee Rice on NBC’s second season of “World of Dance.” Kinjaz is a prominent Asian American dance crew that has opened up dance studios across the world and published numerous choreography videos on Youtube.

Renowned dancers like Bailey Sok and Melvim Timtim are the prominent faces of S-Rank, a famous dance crew that Timtim founded, and travel the globe to teach and perform. Whereas the traditional white-dominated Hollywood industry has been racially stifling for Asians to succeed, unmoderated content-publishing platforms like YouTube allow viewers to freely enjoy and appreciate the raw talents and skills of these dancers.

Of course, the topic of cultural appropriation inevitably emerges — there’s a fine line between whether these dance crews are engaging in cultural appropriation or cultural appreciation, and this line is further blurred due to the ethnic roots and tradition of hip-hop dancing becoming as diluted as it is popular. As recent surges in the Black Lives Matter movement call for the reevaluation of systemic and intrinsic racial prejudice against African Americans, it is important to acknowledge how the hip-hop music and dance genre has often been misused and misrepresented in pop culture. There is also an important distinction between “hip-hop” and “urban” dance, of which the latter had been used to describe these collegiate dance teams. However, recently the harmful racial implications of the term “urban” has come to light, as many famous choreographers, such as Keone and Mari, have publicly stopped using the term. In short, the term “urban” bypasses the roots and culture of African Americans in an attempt to neatly package their artistry to a general audience.

In regards to cultural appropriation as a whole, Alice Wang says, “The line between cultural appropriation and appreciation is drawn by knowledge and mutual respect.” By listening to victimized parties, giving credit where it is due, and actively honoring the cultures and communities from which traditional hip-hop music and dance originate from, Asian Americans can demonstrate their respect and appreciation for the African American community for creating an artform that has empowered them.

Given the ongoing COVID-19 pandemic, college dance teams will have to find other ways for members to dance safely. Some host pop-up dance workshops over Zoom calls where they invite famous choreographers to teach. STEEZY is a popular platform that posts tutorials and fun challenges on YouTube, as well as affordable online dance classes on their website. Dancers frequently go live on Instagram to teach their choreographies to those who do not have access to in-person studio classes, and with the recent rise in popularity of Tiktok, people of all ages and walks of life can learn simple 10- to 15-second dances in the comfort of their own homes. Despite social distancing measures in place, dance crews will continue to exist through other means and provide opportunities for others to enjoy the social and emotional benefits of dance.