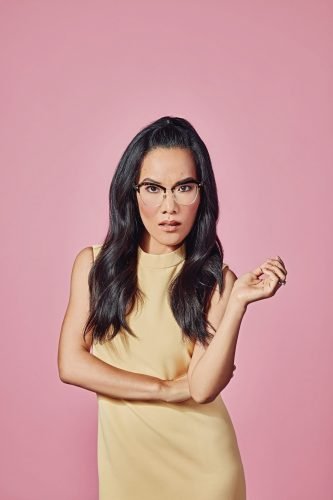 Ali Wong warns readers of “Dear Girls,” “I am not Maya Angelou.” The book, published last September, takes the form of letters to her daughters: with shorter ones detailing the difference between good and bad Asian restaurants or dishing out advice on giving birth, and the longer letters recounting turning-point moments in Wong’s life. However, sitting on my couch, mimicking Wong’s cover (swap the sparkly gown for an 11-month-old sucking on a bottle), I was not quite sure if it was my little one or the book putting me to sleep (maybe both). Like Wong a month before her draft was due, I too was ready to tell my editor that I had given up. A few nights later, I pushed through the second half of the book and had a slight change of heart.

Known for her Netflix specials “Baby Cobra” (2016) and “Hard Knock Wife” (2018), Wong is marked as both a mother — having been pregnant in both tapings — and Asian American. I admit I was drawn to this book because Ali Wong is an Asian American woman, just like me, in a male-dominated field. One of her famous quips is that no one would have expected an ethnic studies major to outearn her husband, a Harvard Business School graduate. Yet there she is.

In her opening letter, Wong admits that she did not feel smart enough to write a book. That’s okay, I thought. I expected vulnerability, a unique perspective due to her background, and as with all these celebrities, a ghost writer or, at least, an editor with a heavy hand in the writing process. Disappointingly, the first six chapters read like unused material from her stand-up.

On the one hand, the no-holds-barred, pro-sex, provocative charisma exuded from every page genuinely screams Wong. Wong takes us through her monthslong immersion in Vietnam as a Fulbright scholar and the beginning of her career doing shows in San Francisco in what amounts to quotable quips and tangential turns.

Moreover, jokes can become tiresome. How so? Generally, in order to get the audience on board, the performer introduces a scenario with a particular aim: to create tension. Then, like a knife, the comedian releases the tension almost immediately with a punchline. Furthermore, there’s no reflection required of the audience and, particularly in harmful jokes (particularly those that reify real-world violence experienced by women and marginalized populations), the audience is let off the hook, guided to laughter because in this genre, “It’s just a joke.”

What results is a bunch of plot points and a lack of narrative flow. After a while, the punchlines made my mind seesaw: the increase of tension, the release of tension, again and again. One ongoing joke is how Wong “traps his ass.” First, she has a relationship with a boy — who happens to be a male version of herself — despite having read his diary, in which he writes that she is merely a friend. Later, she fakes being a vegan to talk to the man who would later become “Mr. Wong.” (And not part of the book, but as we all know from “Always Be My Maybe” (2019), she recruits Keanu Reeves, Daniel Dae Kim and Randall Park to be in her movie and make out with her.) But throughout these escapades, Wong does not actually go into detail as she goes from friendzone to endzone; instead, these episodes are just the punchline to that motto. Personally, I just wanted to scream, “But tell us Ali, how do you ‘trap his ass’?”

The writing picks up when Wong begins to talk about her husband, Justin Hakuta, i.e. “Mr. Wong.” Although introduced in earlier chapters, Wong then falls for the need to re-masculinize the Asian American man, comparing him to the likes of Daniel Dae Kim. The problem is that mainstream media only recognizes the Asian male actors that fit normative and Western standards of men — an example being the spotlight on Kumail Nanjiani’s bodily transformation, rather than celebrating the plurality of masculinities that Asian American men exhibit.

Wong is problematic when she names the ideal Asian American man — thereby, placing them in a racial/ethnic category — but then criticizes other comedian’s jabs about her own identity. It is no doubt essentializing that her white, male comedic peers reduce Wong’s race and/or pregnancy, and, later, motherhood, to a shtick. Wong goes so far as to say that “What is it like being an Asian American woman in Hollywood?” is her least favorite question to answer. Yet with Wong’s logic, it is wrong to buy her book, listen to her stand-up, or watch her movie solely because you resonate with her identity as Asian American, as a woman, as a mother, etc.

While talking about an older female Asian actor, Wong recounts the woman, code name Rebecca, crying about the fact that she did not get cast in “Crazy Rich Asians” (2018). Wong then brushes her off and remarks that the name of the game used to be “Don’t miss the one spot every ten years.” Wong claims that she does not feel the need to be identified solely through her racial identity because her generation does not lack the opportunities that Rebecca’s does. This brings up the poignant question of whether Asian American representation has been achieved in ways that we are not only representing ourselves beyond stereotypes, but also being cast outside of roles marked specifically for us. Wong seems to argue that Asian Americans are past needing representation and are valued for their talents beyond their racial identity. (Incidentally, I was only interested in her Netflix comedy specials and this book, in particular, because she is Asian American.)

Even African American actors are not beyond requiring more representation despite the recent paradigm shifts. There are few examples of radical presentations within Hollywood, such as a role typically filled by white actors being “re-presented” with a racially different casting: Jordan Peele’s centering of Black family in the horror film “Us” (2019) or Zendaya’s portrayal of MJ in the latest Spiderman series. Yet the casting of Halle Bailey as Ariel in the Disney live-action remake of the Little Mermaid caused controversy and even uproar. Asian roles remain limited. “To All The Boys I’ve Ever Loved Before,” “To All the Boys: P.S. I Still Love You,” and Wong’s own “Always Be My Maybe,” all rom-coms, feature a (very specific and narrow) Asian representation.

Reflecting on my own engagement with her text, I wonder if the act of reading memoirs by diverse people of color is simply a momentary “vacation in difference” from which we return only to continue in our lives. Or are we actually changed? While Wong might not be the greatest writer of all time, she does complicate our thinking in regards to not only what it means to be Asian American but also what we, as Asian Americans, need.