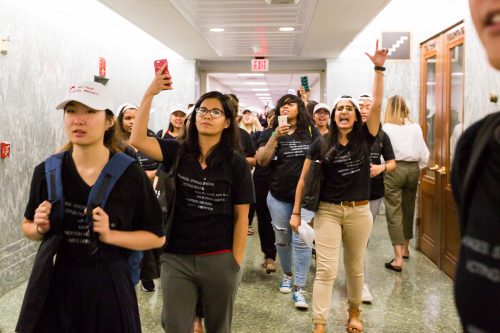 We caught up with the National Asian Pacific American Women’s Forum (NAPAWF) to discuss the health implications of COVID-19, specifically for Asian American women. NAPAWF’s mission is to produce systemic and policy changes “to gain full agency over our lives, our families, and our communities.” It’s a goal that Sung Yeon Choimorrow, executive director of NAPAWF, calls “very simple, but audacious.”

She went on to say that “the dream [is] to live our lives on our terms and in ways that we think [are] meaningful, healthy, and sustainable.”

In action, attaining that dream looks like campaigning for the passage of the Health Equity and Access under the Law (HEAL) for Immigrant Women and Families Act, a bill that NAPAWF has been championing for the past six years. Right now, new permanent residents must wait five years before applying to healthcare programs such as Medicaid and the Children’s Health Insurance Program (CHIP). Undocumented immigrants are completely barred from those programs and from purchasing insurance provided by the Affordable Care Act (ACA). The HEAL Act would expand healthcare protections, remove the five-year waiting period, and allow anyone federally authorized to access Medicaid and CHIP, including DACA students. Undocumented migrants would be able to purchase insurance provided by the ACA marketplace. In May, HEAL made its historic introduction to the Senate.

Choimorrow credits the urgency of the COVID-19 crisis as the instigator of change: “One of the things this pandemic has made more clear is how vital what we are fighting for is, more now than ever. We received interest in the bill from elected officials who had not shown interest [before] and now want to prioritize it knowing that the virus does not discriminate based on people’s immigration status. In a public health crisis, you cannot keep an entire country safe if not everyone has access to affordable and quality care and medical services. Even though we have been beating this drum for a very long time, the fact that everyone is experiencing this public health crisis at the same time is making people realize the importance of what we started fighting for years ago.”

And that’s just a sampling of the legislative advocacy work NAPAWF is engaged in.

“We really try to focus on public policy that is at the intersection of immigrant rights, racial justice, gender justice, reproductive health and rights and reproductive justice. So either we are the only Asian Americans at the table or we are one of the very few or only organizations that bring a gender-justice centered approach to conversations amongst progressive Asian American organizations,” Choimorrow said.

NAPAFW is the only Asian American organization nationally that aggressively supports women’s right to choose. “And not only women’s right to choose to not have children, but women’s right to have children, and to raise them the way they want,” Choimorrow says, enumerating the three principles of a reproductive justice framework. “That’s why we work on a immigrant rights, gender justice, to stop violence against women, and economic justice issues. Those all impact those three tenants, three decisions we want women to have autonomy in.”

I then asked Choimorrow about the ongoing Asian American scapegoating and she responded: “When a crisis like this hits, it is not only racism, it is people losing their jobs, people in isolation and alone who are susceptible to depression. Yes, racism is bad and when you experience that discrimination and the hostily, it is not safe for us to be outside, but there are also so many other factors. There are people sheltering-in-place with their abusers. There are so many things at play here and I am concerned about the overall well-being of Asian American women in this country right now. Mind you, many Asian American women are also frontline or what they consider essential workers. There is a whole article on how Filipinas make up a significant portion of the nurses in Los Angeles. Up to 15-20% of the nurses in California are Filipino women.”

She added that many older generations of Asian Americans own small-businesses. As COVID-19 support rolls out with the information provided in standard English (and sometimes also Spanish), immigrant business owners who are not fluent in English are left unable to access these programs. In Chicago, the Korean Workers Rights Organization is able to assist business owners and individuals filing for unemployment, but without these additional organizations, these forms and processes do not support non-English speaking people. Choimorrow reasons that “There is a huge gap between what our community needs and what we can access because of the language barrier.”

With four offices located in New York, Chicago, Washington D.C. and Atlanta, and chapters in cities across the United States, NAPAWF itself was not immune to the workplace effects of COVID-19. And yet, NAPAWF walked the talk: Choimorrow told me about the many accommodations made to ensure its staff’s safety and wellbeing, including beginning to work from home in early March. Even before American states and counties declared a shelter-in-place order, NAPAWF moved into the virtual realm, shortened the workweek, and provided teletherapy to staff members who requested it.

In addition, NAPAWF provided an allowance to purchase home office furniture and meal stipends to encourage staff and members to patronize women-owned and immigrant-owned small businesses and restaurants to help them stay open. Choimorrow also outlined measures taken to accommodate the changing work landscape during the pandemic, from parents staying at home and caring for their children to paid leave if a staff member was hospitalized with COVID-19. She notes that leadership at NAPAWF intends to solicit input from the staff before reopening and developing a safe and reasonable plan together.

With all the COVID-19 measures the organization has put into place, it would seem that NAPAWF has got everything under the sun covered. However, the pandemic is uncovering a glaring source inequity: technology. Choimorrow shared that NAPAWF’s desire to center the population whom they support, particularly those with a lack of access to representatives and the democratic system, means helping members with technology-based tasks.

“Getting on Zoom can be really difficult for [those with limited English language skills] and sometimes, the only way they have to access the internet is by smartphone,” Choimorrow said. “We will have staff and bilingual members get on the phone and walk the aunties through the steps. It is this lesser known inequity, the technology inequity, which happens to be one of the bigger infrastructure challenges throughout our community.”

When I pointed out that the HEAL Act and technology equity are not unique to Asian American women, I was pleasantly surprised when Sung Yeon Choimorrow explained NAPAWF’s intersectional stance as central to ensuring reproductive justice. She quoted to me a phrase I regularly use to define my own activism and position of solidarity: “If you have come to help me you are wasting your time. But if you have come because your liberation is bound up with mine, then let us work together.”

In fact, NAPAFW partnered with Black and Latina women to get a tri-caucus to release a joint statement against Asian American racism arising from COVID-19. Even in May, before the protests inspired by the murder of George Floyd and Breonna Taylor, Choimorrow had her ear to the ground with regards to the need to create coalitions with and as people of color.

Choimorrow urges Asian Americans to think deeply about our place in U.S. society. “The whole idea of a model minority was created by white people to use Asian Americans as a wedge race and many of us just fed right into it. And culturally how many of us were told to just keep your head down to do your best and you will be successful. ‘Don’t ruffle feathers. Your job is to blend in as much as possible.’ (…) There are the camps of [Asian American] people who say, “We are not people of color” and promote anti-Black sentiments, such as lighter skin being associated with beauty and darker skin not. Skin whitening is a thing in many of our cultures. It is layered. And then there are progressive people who are doing activism work for people of color, who say ‘I am going to liberate Black men from the awful incarceration system’ without actually realizing that it cannot come just from the goodness of your heart and your passion for the issue. The work has to come from being bound together, and that my liberation depends as much on this as it does for other people, and vice versa. I find that many Asian Americans that come into this space are very uncomfortable talking about racism.”

As COVID-19 ramped up, some Asian Americans experienced in-your-face racism and discrimination for the very first time and coming to realize the illusion of the model minority title. But Choimorrow has always known that the pitting of races against one another to be “how the white supremacy wins.”

“It is not just about my piece of the pie,” Choimorrow points out, “It is about the world being a more equitable place. To be fair, Asian Americans have not shown up for people. But there is Yuri [Kochiyama] and Helen Zia. We just haven’t shown up in a bigger collective way. I hope there is more space for these movements now. There are guides on how to talk to your first-generation parents. That’s the steps we need to take. It’s great, but we need to own some of that baggage. I am very proud of the fact that NAPAWF and my activist work is intentionally working towards liberation together, rather than as a specific interest group.”

In conclusion, Choimorrow requests that Asian Americans with the ability donate to their stimulus check and additional funds do so. Racism and injustice are both systemic issues, ones that we, Asian Americans, are not exempt from. Choimorrow and NAPAWF demonstrate that seeking equity across the board and uplifting all people of color is the only route towards true liberation.

Learn more about National Asian Pacific American Women’s Forum, their core issues, and how to get involved on their website: https://www.napawf.org/