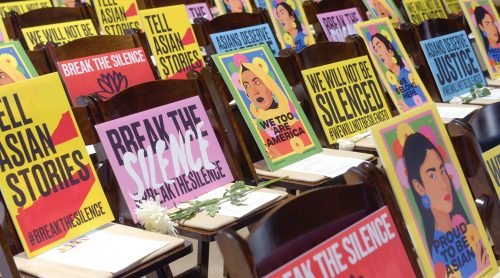 This article was sponsored by The WNET Group. All opinions are of the writer and not representative of THE WNET Group or its subsidiary companies. What follows contains references to violence against Asian Americans. Please take care of yourself and refer to our list of resources to stay informed, connected, and safe.

On March 17, 2021, while stumbling over the names of Asian Atlanta spa shooting victims, Georgia’s Cherokee County Police spokesman Captain Jay Baker made a rare statement about an assailant: “Yesterday was a really bad day for him.” On the other side of the country a few months prior, Chesa Boudin, the San Francisco district attorney at the time, had described the attack and murder of Vicha Ratanapakdee as a “temper tantrum.”

Titi Yu, director of PBS’ recently released documentary “Rising Against Asian Hate,” remarks, “To [people like] Captain Baker, Asian Americans are invisible. The people killed were just these nameless and faceless victims. It’s the same in California: Boudin is progressive, but this trend of not seeing Asian Americans, it’s something that transcends partisanship.”

Narrated by Sandra Oh, “Rising Against Asian Hate: One Day in March” zooms into the Atlanta spa shooting but doesn’t stop there, touching on the hypersexualization of Asian women in America, gun safety, gerrymandering, and the COVID-19 Hate Crimes Bill.

While attacks against Asian elders and women have been on the rise since the beginning of the pandemic, these incidents have been shocking but not surprising. “Violence and bias against our community is nothing new,” Lawyer Charles Jung states in the documentary. From the Japanese American internment camps during World War II and Pearl Harbor to the 1982 murder of Vincent Chin to rampant Islamophobia in the aftermath of 9/11, Asian Americans have never been American enough.

Hearing from Asian Americans in the Wake of Tragedy

In Atlanta, Robert Peterson walks viewers through the morning he realized his mother Yong Ae Yue was missing. Son of a Black GI and the Korean Yue, Peterson recalls people telling him the victims of the Atlanta spa shootings were Asian as he searched for his mother and him having to share that he is in fact Asian as well. When Titi Yu catches up with Peterson, he is taking part in the trial of gunman Robert Long, connecting with the Asian American community, and cooking Korean food with his ajumma, his mother’s longtime friend.

“His story is so unique, and yet, at the same time, representative of the larger Asian American story in that a lot of second-generation Asian Americans have different roots that come together in this country together,” Yu shared. “[We see him] telling his own story and coming to his own realization of what it means to be Asian American. That’s why his relationship with ajumma is so touching, because she really is sort of his surrogate mother throughout his life. And now, even more.”

Beyond Atlanta, the documentary shines a light on Michelle Au, the first Asian American state senator in Georgia. A physician herself, Au shares that regarding Asian Americans as harbingers of the COVID-19 disease is just “a new chapter in a very old story,” citing historical stereotypes regarding outbreaks of tuberculosis and bubonic plagues in Chinatowns.

Almost omniscient, Senator Au stood before the Georgia Senate the day before the Atlanta shootings to address the uptick in violence against Asian Americans, exacerbated by racist responses to the coronavirus pandemic. The film touches on this dangerous rhetoric and goes further by providing proof of the multitude of attacks, splicing in news footage from across the nation.

While it might be hard for an Asian American to watch, Yu told me, “What we see on screen is only a small part of what we were screening through in the editing room. Ultimately, in the end, we felt it was important to show the brutality because these videos were [and are still] coming to us through social media. Yet the [sheer number of crimes] was something that we, as Asian Americans, started to notice before the general public really became aware of it.”

Building Momentum Through the Collective Power of Our Community

The documentary doesn’t dwell on the past but also talks about solutions. The COVID-19 Hate Crimes Bill passed with bipartisan support and will address language access to increase police reporting and gun safety. But, as Oh narrates, some think “the bill doesn’t go far enough.”

“In the film, we definitely emphasize that Robert Long wouldn’t be facing the hate crime charge if it weren’t for the death of Ahmaud Arbery. Hate crime legislation can be very controversial, [because] not everybody in the community agrees with sentence enhancement and all the things that come with hate crime legislation,” Yu said. “I think all those points are very, very valid. In regards to the COVID-19 Hate Crimes Bill, we wanted to make sure that it’s understood that this is only the first step, and what the community expects is that the federal government will do something about not only anti-Asian crimes, but hate crimes in general.”

Yu cites that while the Asian American demographic has seen the greatest increase in hate crimes over the last two years, Black people are still the most targeted in most cities: “Hate crimes are not just an Asian issue or a Black issue or Latinx issue. It’s something that we should all be concerned about.” Hate crimes, unfortunately, can be difficult to prove if the evidence merely is verbal or physical — in certain cases, symbols can be used as evidence that a person was targeted for their race or identity, but in most Asian American cases, that evidence remains invisible.

Another solution is the power of community. Yu’s team spent time at the Center for Pan Asian Community Services (CPACS), a nonprofit in Georgia, that serves Asian Americans, particularly immigrant and refugee families, through access to comprehensive health and social services, capacity building, and advocacy.

Opening the door to talk about race and racism of all kinds is vital to healing Asian American communities. In the immediate aftermath of the tragedy, CPACS conducted listening tours, going deep into the Asian American community to have conversations around racial justice and racism. Yu remarked, “For the first time, a lot of elderly Asian Americans who have never even articulated how they’ve faced racism their entire lives finally got the chance to talk about race. And let’s face it, there is a lot of racism within the Asian American community — and that’s something that we really have to confront. Seeing this tragedy has led to deep work that organizations are doing by having these conversations break open in this moment and that includes Black Lives Matter.”

Although a difficult topic to digest, “Rising Against Asian Hate” is jam-packed with both heartfelt and often heartbreaking moments. Covering Ratanapakdee’s daughter describing what it was like to wash her father’s blood off the pavement, Senator Au’s current struggle with redistricting with commentary from Stacey Abrams, and Peterson crying in ajumma’s arms, we learn that the power for change comes from within the Asian American community and radiates to so many others.

Yu hopes that the film will awaken Asian Americans: “For Asian Americans, this whole notion of keeping our head down, working hard, and not making waves, that hasn’t really worked for us.” Moreover, she hopes that it will reach a general audience and that non-Asian viewers will realize that Asian Americans are a force to be reckoned with.

“Rising Against Asian Hate: One Day in March” explores the fight against Asian American hate following the March 2021 mass shootings at three spas in Atlanta. The film premieres on October 17 nationwide on PBS. 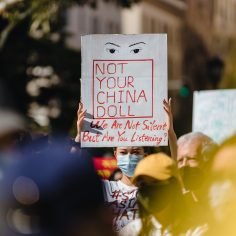 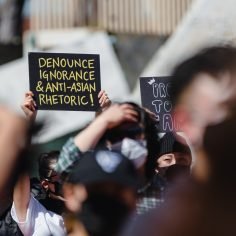 Anti-Blackness Harms Our Communities: Finding Solidarity in the Wake of Anti-Asian Violence

Going to Chinatown became self-care trips for me during the global pandemic. These little grocery store...