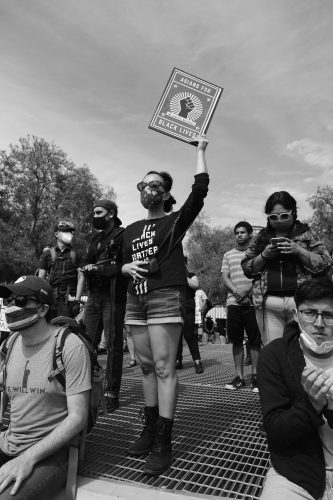 In this time of racial reckoning, many organizations in Asian American communities have paused to make solidarity statements, organize and facilitate workshops that build awareness, and re-examine the words they’ve used. We at Mochi have also been thinking about how we can improve our understanding and coverage of racial issues in America. In a piece published in 2018, I wrote about the concept of Asian privilege, but now see what I included there as falling short.

In “Is There Such a Thing as Asian Privilege?”, I focused on statistics to illustrate the disparity among Asian communities, disproving the parallelism between “Asian privilege” and white privilege; yet I failed to acknowledge the privilege Asian Americans do have over other Black, Indigenous, and people of color (BIPOC) groups. We can only work toward a more equitable society if we first acknowledge and examine the privileges we’ve been granted through a system made by and for white colonizers. In particular, the model minority myth misleads average Asian Americans into believing that we’ve earned these privileges through the virtue of work ethic, when in fact, this stereotype was designed to form a racial wedge between Black and Asian communities. A discussion of our privilege must include this fact.

I also failed to include voices from Asian American perspectives outside of my own Chinese American experience. In the spirit of growth and learning, I’d like to revisit the topic, this time with the help of journalist Melissa Pandika, and writer and host of the podcast MigrAsians, Nisha Mody. Below, they help us dig into the privileges Asian Americans have, whether or not “Asian privilege” should be a term, why it’s important to acknowledge one’s advantages, and how we can move society forward in a way that values and demonstrates equity.

Do Asians Have Privilege?

While there are privileges that come with the higher incomes that certain Asian populations have — like better SAT scores — there are other privileges that correlate more with ethnicity. In a video conversation about Black and Asian solidarity made by Wong Fu Productions, scholar Dr. Peniel Joseph said, “[Asian Americans] have privilege, absolutely. The whole organizing principle of white supremacy is anti-Black racism, and here’s what that sets up: it sets up a racial caste system. So there’s a ladder, and the ladder has white people at the top, Black people at the bottom, and all these other groups in between shuffling to try to climb that ladder.”

That “shuffling” can sometimes manifest as Asian Americans separating themselves from Black people in America, drawing lines of division. Pandika says, “Anti-Blackness pervades our community, and it stretches back to the colonial histories of many Asian countries. Many in our community view Black Americans as dangerous and, essentially, less human. I can’t speak for the Black community about how it views the Asian American community, but I imagine many are aware of its anti-Blackness. This mutual distrust, which has roots in white supremacy, prevents us from working together to dismantle it.”

It is true that Asian Americans have our own struggles with oppression and prejudice (Mochi reader Yunho Nam highlighted the negative “math club” stereotype in a comment response to the article on Asian Privilege). However, the discrimination that we experience does not put our lives in danger to the same degree. We are not targeted and brutalized by law enforcement in the same way that those who are Black and Latinx are. Says Pandika, “I’ve experienced racism as an Asian American, but never to the point that I felt my life was at stake.”

Stanford researchers analyzed data in North Carolina and found that police stop and search the vehicles of Black and Hispanic drivers at higher rates than white and Asian drivers. Data also shows that the rate of Black Americans being fatally shot by police is far higher than any other group at 31 per million, with Hispanic Americans next at 23 per million, white Americans at 13 per million, and “other” ethnicities at 4 per million.

Mody points out that “…many Asians and children of Asian immigrants were taught to assimilate. They were taught that they can be just like white people if they just studied hard enough. We never had to have a ‘talk’ from our parents about how the police might pull us over. Assimilation may have felt uneasy, but it was also easier for us to do. This is a privilege.”

What about the term “Asian privilege”?

While Asians do have privileges, the term “Asian privilege” is perhaps a misnomer, as it connotes an advantage in society equivalent to (sometimes depicted as above) white privilege, which is not the case. The privileges that Asian Americans have access to are not a result of systems created by Asians to benefit themselves, but have instead been designed through systems of white supremacy.

In regards to the term “Asian privilege,” Pandika says, “I think it feeds into the harmful model minority stereotype, i.e., that Asian Americans are more successful than other BIPOC because we’re smarter, work harder, and are more obedient. White America has historically invoked this stereotype to use Asian Americans as a wedge against other BIPOC, arguing that other BIPOC ‘don’t have an excuse’ for their disadvantages compared to their white counterparts, when Asian Americans managed to achieve success. In reality, though, American immigration policies favored highly-skilled Asian immigrants.”

Pandika goes on to mention the disparities between Asian American communities and how the model minority myth obscures the racism and xenophobia that Asian Americans experience in varying degrees. I described some of the disparities in my previous reflection on Asian privilege, but did not point to specific nuanced realities of some less privileged Asian Americans. Pandika, for instance, shared, “My parents (who are from the Philippines and Indonesia) did not arrive in the U.S. by way of skill-based visas and, in fact, lived undocumented for several years. Many other immigrants from Southeast Asia arrived as refugees.”

Mody has even observed varying levels of privilege within communities. “As a South Asian, whose parents were born in India and are Hindu, I see so much privilege WITHIN my religion. Casteism is real and colorism is real, and there are privileges right now amongst my culture that are so stark and disturbing. As a whole, though, there are privileges for Asians who came to the U.S. because it was their ‘choice’ in that they came for school or work, as opposed to Asians who came as refugees or through other reasons that weren’t their ‘choice’, specifically Vietnamese and Cambodians.”

Why is it important to acknowledge one’s privilege?

In that aforementioned conversation hosted by Wong Fu Productions, journalist Lisa Ling said, “It’s so important that we admit to [our] privilege, and that we’re always aware of it, that it’s in our consciousness. I would even argue to say it’s important to stand up against systemic oppression, in communities of color, in communities where we live.”

To speak about privilege is simply to acknowledge the world in which we exist, argues Mody.

“One person’s privilege is always linked to someone else’s oppression while we live in capitalism. That’s just how it works. We live in a world that is not collective; it’s about power. And assimilation helps us have this power. So talking about your privilege is simply talking about your existence in a world that wants you to be deferential to white male heteronormativity.”

For Pandika, recognizing and calling out one’s privilege is a pathway to change. “[Acknowledging privilege] opens our eyes to, and therefore allows us to challenge, the systems that have benefited us and kept us comfortable, while harming others. Acknowledging our privilege, rather than coming from a place of defensiveness, can also help us actually listen to those most oppressed by white supremacy and allow them to set the agenda for change, which allows freedom for everyone. As civil rights activist Fannie Lou Hamer put it, ‘Nobody’s free until everybody’s free.’”

What can we do to get to a place of equity?

Privilege is not a dirty word — rather, it points to a lack of discrimination or hardship in certain areas. Almost all of us have some level of privilege, whether it’s afforded to us through race, gender, age, mental or physical abilities, sexual orientation or other attributes that make it relatively easier to move in our societies and systems. The goal is not to be ashamed of, deny, or eliminate the privileges we have, but to use them to build a more just society for all of us.

Mody says, “I think the first step is accepting that systems control so much of our lives, and if we try to change these systems, there can be more equity. I also think on an individual level, we need to name our individual privileges, explore our ancestral story, and dig deep to understand how we were affected by colonization. How does this show up in our behavior? I think Asian Americans are raised to be very competitive and parents often compare us to others. This is an effect of colonization and capitalism. It isn’t about sharing success; it’s about winning it. If we keep trying to be better than others, we cannot heal, and we cannot have the same privileges.”

To get closer to a society where we can all access the same level of privilege, Pandika suggests, “We can educate ourselves by reading the work of Angela Davis, James Baldwin, and many others who have written about the oppression of Black Americans. We can also learn about Black-Asian solidarity movements and how Grace Lee Boggs, Kartar Dhillon, and other Asian Americans fought in solidarity with Black activists. We can join groups like Asians4BlackLives. We can listen to and follow Black leadership, and familiarize ourselves with the demands of the Movement for Black Lives and other Black-led organizations. We can have difficult conversations with our family members with the help of resources like Letters for Black Lives. We can examine how we’ve been anti-Black and complicit in white supremacy. We might find all of this difficult, awkward, even painful — but Black Americans are dying. Their lives depend on us doing this work.”

Thank you to Melissa Pandika and Nisha Mody for taking the time to discuss the topic of Asian American privilege with us. We know this is only scratching the surface of a complex and contentious topic. If you have thoughts to add, we invite you to (respectfully) do so in the comments.