Home Black Allyship @ Mochi, Activism“We did it”—Reflections on Kamala Harris: How we will celebrate her and hold her accountable as our new VP

“We did it”—Reflections on Kamala Harris: How we will celebrate her and hold her accountable as our new VP 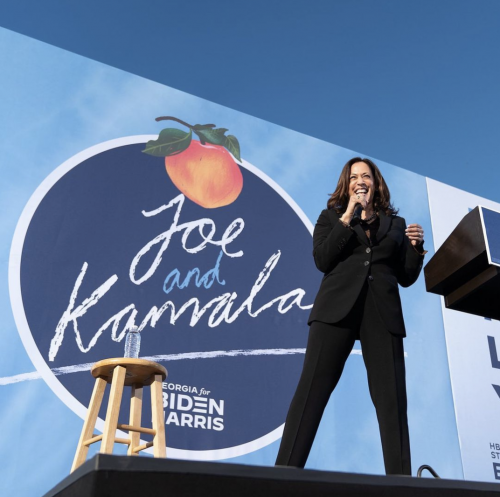 Vice President Kamala Harris. Just hearing her name and title makes me swell with pride. A woman in the second highest office — and a Black and Asian American woman at that. On November 7th, when Harris called Joe Biden to congratulate him, I too was giddily shouting “We did it!” but at her. Nevertheless, this was a long time coming: Shirley Chisholm, like Harris, sought the presidential nomination, back in 1972.

At the same time, I feel a sort of dread. Both parties picked away at Harris’ run for the Democratic presidential nomination, calling her “the top cop” of California, an ugly look in a year that would bring about the culmination of nationwide protests against anti-Black police brutality. I hope that she keeps in mind her own mantra about the responsibility of opening doors that comes with being “the first.” Or as the frequently-circulated Harris quote goes, “I may be the first, but won’t be the last.”

In light of this historic occasion, we, the editors of Black Allyship @ Mochi, wanted to see what feelings others in the AAPI community hold about Harris, from joy to apprehension and anything in between. (n.b. We reached out to our friends, family and community. In keeping with our mission statement, it is important that we are transparent and admit our survey yielded a limited perspective. Nevertheless, the diversity in responses was refreshing to see and worth sharing.)

Here’s what they said:

What makes you excited about Kamala Harris as the Vice President?

“I’m excited for women and girls of color — and daughters of immigrants — to see themselves reflected in Kamala Harris and to be inspired to pursue their aspiration. I also want everyone to see that the face of leadership isn’t always a white man. I want to be hopeful that this is just the beginning of a new era where we will see more women and POC in visible leadership.” – Melody Ip, 42, Chinese American

“I’m excited for her to prove that a woman is capable of leading our nation, and put to rest the argument that women are too emotional to be president. I’m also excited that she may become president, but before that, I hope she gives meaning to the role of VP and gets to preside over the Senate so she can earn people’s trust. I’m excited to see her in action as VP.” – Yvonne, 30, Asian

“I am excited to see a Afro-Asian American woman in office. I am not a huge fan of her in general and I am still very distrusting of her because of her actions in the past, but the fact we voted for a ticket with someone who looks like her is a glimmer of hope.” – Allie, 27, Asian/Chinese

“Being able to tell my child that the vice president is Asian just like they are.” – Jennifer Duann Fultz, 33, Taiwanese American

“Honestly, having someone who speaks intellectually has been something I didn’t realize I missed so much in the past four years. I’m also excited about having someone that seems willing to listen to their constituents as well as experts in areas that are important, like science and medicine. And I am extremely excited for someone with all the different identities that Kamala Harris represents residing in the White House.” – Victoria Tsang, 28, Chinese

“Her representation as the first United States’ female, African American, and Asian American vice president. As the highest-ranking female elected official in U.S. history, [she] will further push what young women can and will be. Her position as the vice president is shattering the glass ceiling and opening up opportunities for future generations. I am already so inspired by her unapologetic voice and fearless presence.” – Vivian, 27, Chinese American

What do you hope she will do, or what do you want to hold her accountable to?

“I hope she will use her position of privilege and power to continue fighting for marginalized communities. I also want her to follow through with her commitments toward strengthening public education, including making early childhood education and college more accessible.” – Melody Ip, 42, Chinese American

“I hope she will hold the previous administration accountable for the damage they did to our democracy, and help restore the Dept of Justice. I hope she will try to pass progressive legislation like a new Civil Rights Act.” – Yvonne, 30, Asian

“I hope she atones for her anti-Black, anti-trans policies from the past. If she can do the basics and make amends for those harmful policies she put forth, then I will begin to slowly trust her and start to hold her accountable for a lot of the social issues we are focusing heavily on (ex: defunding the police, abolishing ICE, addressing issues in regards to healthcare, advocating for the protection of women’s healthcare, etc.) Again, until she can do the bare minimum, I don’t expect much from her.” – Allie, 27, Asian/Chinese

“I hope she will leverage her experience as a prosecutor to overhaul the criminal justice system.” – Jennifer Duann Fultz, 33, Taiwanese American

“I hope she will address and make the effort to really start attempts to resolve all the troubling issues our country has had for a long time that have been made increasingly clear in the past few years (education, race issues, immigration, healthcare, income inequality, equity, etc.). I also hope she, along with Biden and their administration, will uphold the promises they made during their campaign. I know these are not issues that can be resolved within one term, but they need to make it clear that they are putting in an honest effort and not just trying to sweep things under the rug again.” – Victoria Tsang, 28, Chinese

“I want to hold her accountable to civil rights, justice and equality for all, criminal justice reform, and climate change. During 2020, we lived through a worldwide pandemic, Black Lives Matter protests, and massive wildfires along the West Coast. None of the three are going away anytime soon unless we have a strong leader to bring immediate help, accountability, and repair. We cannot continue to live in denial, and I hope that she will be the one to bring us out of the dark.” – Vivian, 27, Chinese American