Racial Justice 101: Colorblindness and the Social Construction of Race in America 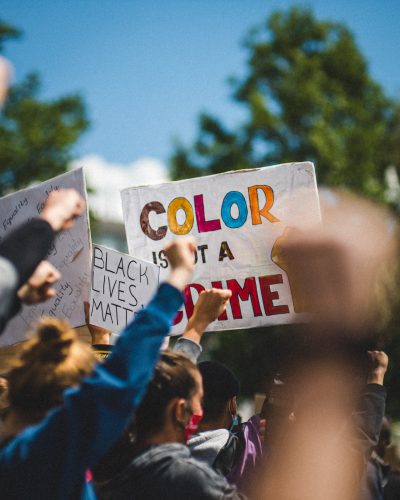 Growing up in the culturally diverse San Francisco Bay Area, I was raised to be “colorblind.” My mother instilled in me a hope that I would look beyond race when engaging with others. She would tell me that it didn’t matter what color the person’s skin was, but that what mattered was what they chose to do and the situations they put themselves in. “Anyone can work hard, put their head down, and succeed” was her mentality. As an adult, I now realize (and so does she) that colorblindness in practice is a covert form of racism which promotes the American myth of meritocracy leading to fairness and justice.

What she did not understand was that it didn’t matter if I had the ability to discern the character of a person beyond their physical appearances. Society was created in a way such that I would always be, first and foremost, an Asian American woman and then a person, just as my friend would be first perceived as Black — with all the anti-Black stereotypes and assumptions tied to the racialized body she experienced this world through — and then a person.

Despite the insistence on colorblindness, even from my own experiences, I knew that race was more than skin deep. Even those who knew me well would direct microaggressively racist comments towards how I looked and what I ate — by “racist,” I am pointing to the fact that their assumptions made an implicit connection between race and traits looked down upon in our society. The most tangible example is when people would say to me, “But you’re not like other Chinese people.” Nowadays, I have the ability to ask in return, “And what are ‘other Chinese people’ like?”

How Does our Society Construct and Uphold Race?

Today, Americans are confronted by the social ill of police brutality in Black communities — as well as the constant devaluation of Black lives — and are being questioned on their stance regarding racial equity and justice. Nevertheless, we still receive answers along the lines of “I am not a racist” quickly followed by “I don’t see color” as evidence of their prior claim. Or even more innocuous: “We are all one race, the human race.” On top of that, people are even more confused when racial scholars and activists argue that “race is a social construct” (which it is).

Holding on to the ideology that we are all treated the same, fairly and equally, no matter the color of our skin, is dangerous. When race is described as a “social construct,” the point is to say that there is no biological reasoning for race. Up until the early 21st century, scientists attempted to prove the biological supremacy of white people — hey, genetic superiority was what WWII was all about. Particularly, in the United States, the target of century-long experiments were Black people. However, we now know that there is no difference across race biologically or genetically.

To say “race is constructed by society” is to say that race is a classification-system invented by humans. In addition, that means that it takes a society, i.e. a system, to enforce as well as deconstruct the oppressive notions that subjugate racialized people. One individual’s attempt to be colorblind will not change the system or the society in which it takes place. For that is what systemic racism is.

That system was produced in order to maintain power structures. In America, that power structure is one of white supremacy. (Not white supremacists, mind you; I am not arguing that white power factions like the KKK are behind the scenes instigating racial unrest.) I am recognizing that being white is also a construct. However, whiteness is a constructed monolith designed to seem like a racial categorization in order to harness power over the system. You can’t be racist against white people because white is a chosen category, rather than a race that is ascribed. White people have the option to identify with their country of origin, but chose not to. By clinging to whiteness, those people are freed from the stereotypes tied to their ethnic background.

White privilege is the ability for your skin color to not determine how you are perceived. White supremacy is what happens when standards that are more easily attained by those with white privilege becomes the standard that all people are judged by. Standards such as respectability (which includes appearance and dress) to family norms (such as two-parent households and heterosexuality). Standards that are represented in the media and replicated as “normal,” ostracizing any who do not fit. These standards govern our society, our laws, and our individual lives.

I will forefront by saying that I have no lived experience as a Black person. However, I want to discuss some of the historical specifics regarding the construction of race in the United States, because you might have aunties or titos or lol@s who hold certain negative stereotypes against Black people.

Social constructs are grounded by history, institutions, and stereotypes. The history of Black people in America that we are taught often highlights Martin Luther King Jr. and the fight for civil rights. Sure, there is a small section on slavery, but it tends to be overshadowed by the Civil War. How is it that we must remember and recite the major battles of the Civil War in our history classes, but not the heroes of the underground railroad? How is that some Americans have the audacity to tell African Americans to “go back to Africa” when the Transatlantic Slave Trade and the practices of chattle slavery stripped these human beings of any sort of identity, any connection to their homes, their kin, and even their future as they watched their children sold off like animals?

What does it mean to be Black in America? That’s a big question. It can mean two things: One, that your ancestor was sold into slavery, crammed into a cargo ship, and forced to freely labor on plantations. From this dehumanizing process, the new identity of Blackness arises and unites those who were enslaved or whose ancestors were enslaved as African American. That is the history behind the racial construct of Blackness in America, a history we as a nation refuse to face. Two, we also describe those from the African diaspora as Black. Nevertheless, all people who are Black in America are subject to the ghosts and realities of centuries of oppression and racial injustice that weighs upon the visibility of their Blackness. To be blind to that history is to allow racism to become innocuous, to allow the comment “Well, they are not slaves anymore,” and to allow the injustice of the past to be reproduced today without a thought of how the game was rigged to begin with.

What are Asian Americans Actually Blind to When Promoting Colorblindness?

Not setting aside the fact that racism occurs in our Asian American communities, let us talk about being Asian and colorblind in America: Colorblindness from the Asian American community is required of the model minority. In order to be evidence of the American Dream and promote the ideals of a capitalist meritocracy, anyone (no matter their race, gender, class, etc.) can succeed if they work hard enough. The presence of institutional and systemic racism counters that narrative. Asian Americans become a pawn of white supremacy (often willingly and often unknowingly) when we prove that despite racism, we can succeed. It is high time to recognize that the model minority label exists to provide a racial wedge: “Asians in America can overcome racism; why can’t you?” When we don’t see color, we allow racial discrimination to become a personal failing, a weakness in character, instead of a result of prejudice and history.

Yet we know that the majority of Asian immigrants for the past few decades are granted visas because of their professional skills, giving them a leg up socioeconomically and culturally. Simultaneously, we know that there are still Asians (some of whom are refugees) who are struggling in America and directly counter the model minority myth — and instead of realizing that their position in life is due to racism (historically and institutionally), colorblindness points to an individual’s or group’s shortcomings, recreating and reproducing harmful stereotypes.

We should remember when Asian immigrants were banned. We should remember how places like San Francisco segregated Chinese children into separate schools. By forgetting the institutionalized racism we and other people of color face and pointing to those who triumph in the face adversity — not just Asian Americans, but token Black people like President Barack Obama and Oprah — we are reinforcing a narrow definition of who is American, while neglecting the privileges that we have and the inescapable oppressions others face.

How Can We Move from Colorblindness to Being Actively Anti-Racist?

What do we need to do to recognize Black people, to value them in our society? For us, Asian Americans, it means moving beyond the ideology of colorblindness and recognizing our anti-Blackness. For Americans as a whole, it means acknowledging our inner racist tendencies.

To add to Kendi: Let us remember that being a racist is not an identity category. It is not a bestowed label. To be racist is a choice. In order to move away from wanting to be “not racist” to being anti-racist, we need to not think of racism as taboo.

For instance, to choose colorblindness in America is a racist action. Being colorblind puts the onus of oppression on the people themselves rather than the institutions that prohibit and privilege certain groups.

We all take part in racist actions every day. The question to ask is: Does the accumulation of those acts and your response in defense of your racist actions make you a racist? If so, are you ready to change?

2 Replies to “Racial Justice 101: Colorblindness and the Social Construction of Race in America”