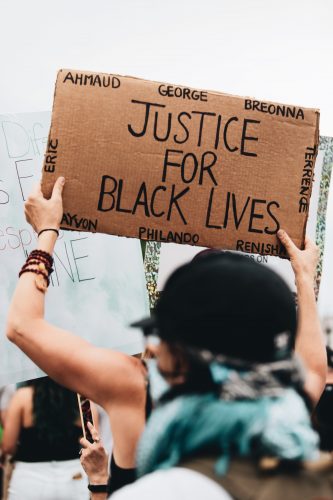 Lift every voice and sing,
‘Til earth and heaven ring,
Ring with the harmonies of Liberty;
Let our rejoicing rise
High as the listening skies,
Let it resound loud as the rolling sea.
Sing a song full of the faith that the dark past has taught us,
Sing a song full of the hope that the present has brought us;
Facing the rising sun of our new day begun,
Let us march on till victory is won.

In moments of crisis

Where we could no longer look away

at brutality against Black bodies that we witnessed in June of last year.

In these moments that fill us with rage, fear, frustration, and sadness

In these moments of revelation.

All I know how to do is sing.

Sing to the heavens.

Sing to find some kind of rhythm

Sing to stir the air around me

to move vibration through my body.

Sing as chant, as meditation.

And the song that came to me in June, and now, was “Lift Every Voice and Sing,” known as the Black National Anthem. I hadn’t thought about this song much since I learned it, when I was 10 years old and in the fifth grade. And as I sing this song today, a flood of memories come back to me.

You see, I attended elementary school in the Oceanview-Ingleside district of San Francisco. A historic African American community, two neighborhoods over from the Asian immigrant enclave where I grew up. I couldn’t have known the significance of it then, but my teachers were Black women who taught us Black history and culture as essential to our education. The centerpiece of our elementary school graduation ceremony was our entire 5th grade class singing in unison “Lift Every Voice and Sing.”

I remember Mrs. Cummings, our venerable principal presiding over the piano, and I can still see the leaf of photocopied sheet music in my hands, following each syllable of poetry stretched across notes in treble clef. Our teacher, Mrs. Hudson’s insistence on consistency and learning by heart has ensured that, to this day, the words of this song have never left me.

They’ve resided in my cellular memory, timeless and resonant, to emerge by way of sound waves, by way of my voice, as a source of strength when called upon.

I just re-visited the history of “Lift Every Voice and Sing,” and I’m shook.

I’m shook at the power it held when it was written in 1899, as a response to the moment in history where it became evident that slavery simply shifted its form of terror into segregation. I’m shook at the relevance it holds for us today in this moment where we are called on to reckon with this fact.

To know that this song was first sung by 500 schoolchildren in Jacksonville, Florida, who then taught it to their children, who taught it to their children, and that it was taught to me — a daughter of immigrants, nearly a hundred years later, I’m shook. To understand that “Lift Every Voice and Sing” was not just a mere song; it is a lineage. A lineage that was extended to me, that has become a part of my story. An incantation so powerful that it has supported generations through the darkest of days, in struggle and resilience. Passed down through generations in hope and vision of a better tomorrow.

And I am a part of that lineage.

What a gift. What a responsibility.

Give thanks, honor the earth, honor each other, honor the stories, let’s get to work.

*Note from the editors: Lift Every Voice and Sing was composed in 1899 by NAACP leader James Weldon Johnson at the onset of Jim Crow Laws that followed the end of slavery in America. Jim Crow laws were anti-Black laws enacted in Southern state legislatures, from the post-Civil War Reconstruction period of the late 1870s to the civil rights movement of the 1960s. (However, versions of these racist laws existed in the North as well.) Named after the derogatory minstrel caricature Jim Crow, these laws existed to uphold white supremacy and enforce racial segregation. This was famously institutionalized by the 1896 Supreme Court case Plessy v. Ferguson, which allowed “separate but equal” facilities, such as housing, schools, hospitals, public transportation, bathrooms, etc. The Jim Crow era is marked by the rise of the white supremacist Ku Klux Klan group, Black voter suppression, and deadly violence against Black communities, as well as the countless Black activists and freedom fighters who fought for racial equity. Although Brown v Board of Education (1954) and the 1964 Civil Rights Act legally ended segregation, many racist and discriminatory policies still exist today, and the fight is nowhere near over.