Laya DeLeon Hayes of “The Equalizer”: On Representation and Racial Identity 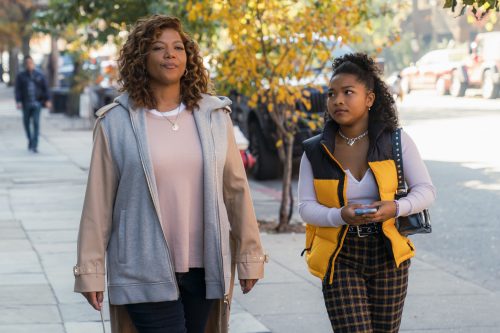 “We are seeing so many Black women, or biracial women like Kamala Harris, who are really leading a movement, and representing for all women of color out here. Black women have been equalizing for such a long time that it is only right that we represent that on TV.”

It’s a poignant observation coming from 16-year-old actor Laya DeLeon Hayes. But like Vice President Harris, Hayes is no stranger to groundbreaking roles: Hayes voiced Doc McStuffins, the titular character of the BAFTA-, Emmy-, and Peabody Award-nominated animated children’s series. Having booked the gig at the age of 9, Hayes has seen the impact the show had in its five seasons spanning from 2012 to 2020.

“[Doc McStuffins] is giving kids hope. It means a lot to me that Black children especially can wake up and see someone who looks exactly like them and inspires them,” Hayes shares. “I can’t tell you how many messages I get from people saying that their kids want to grow up to be a doctor or that their kid isn’t afraid of going to the doctor. It just goes to show how much that type of representation is needed on TV.” Rightfully so, the NAACP recognized the series in 2015 as an Outstanding Children’s Program, and Hayes herself was recently awarded Outstanding Character Voice-Over Performance (Television) this year.

In her newest role, Hayes stars on-screen alongside the Queen Latifah on CBS’s “The Equalizer.” If “The Equalizer” sounds familiar, that’s because the last actor to hold that mantle was Denzel Washington in the 2014 film. While the film is a high-octane action thriller, the new CBS series takes after the 1980s hit series starring Edward Woodward. Latifah’s Robyn McCall still features a former operative disillusioned from government missions who becomes a crime-fighting vigilante. And while Latifah’s rendition still kicks ass and takes names, her calling card is explicitly reserved for those who have nowhere else to turn because the systems are working against them.

In 2021, it feels like the perfect moment for The Equalizer. McCall’s fight is updated for the 21st century, with battles against deepfakes and the dark side of globalization, and it also comes with a new understanding of justice, one that realizes the systems in which innocent people become implicated for being in the wrong place at the wrong time.

Hayes’ character Delilah, the teenage daughter of Robyn, not only plays a huge part in centering her mother’s motivations but also faces her own challenges in a changing society. In one episode, Robyn notices that Delilah has become distant from her childhood friend. Upon confrontation, Delilah tells her mother she doesn’t believe in going to a protest just to post all over social media unlike her former friend. In another episode, Delilah uses social media to petition the city to fill a pothole and gets a meeting with a city official, only to find that the city was more interested in maintaining optics rather than fixing the problem. Acknowledging performative activism and uphill battles that plague communities of color is a refreshing take on the domestic sphere.

Moreover, the McCall family dynamics are more intricate and nuanced. Robyn is a single mom. Robyn’s Aunt Viv, played by Lorraine Toussaint, assists in caretaking duties, no questions asked. When Robyn saves the day and catches the bad guy, she still manages to make it to Delilah’s performance. How? With help of her backup, who understands the importance of supporting the balance between both of Robyn’s responsibilities.

“Seeing the three generations of women from Queen to Lorraine [Toussaint] to me is a true representation of what a lot of households look like and they aren’t really depicted very often on screen,” Hayes says. “Our show has very subtle hints of symbolism that you have to pay attention to. When we are walking out in the fourth episode, it started at Lorraine and ended with me. That’s three generations of women of color there. We get to represent that on TV.”

As for growing up in her own family, Hayes emphasizes the importance of acknowledging the fact that she’s biracial. In fact, Hayes is both Filipino and Black, and she has had experiences that are unique to biracial people in America. “I went to a very diverse school, but I mean getting the comments like ‘Oh, are you adopted?’ Or not knowing that my mom was Filpino — full Filipino — and my dad was Black, they would be like ‘Oh, is she adopted? She looks so exotic.’ That was the word they loved to use. That does not make any person who is biracial very comfortable. Even growing up trying to balance those two identities, a lot of the time when you are multiracial, you think that you have to choose a side instead of fully embracing all the parts that make you who you are.” She notes that her parents had a huge influence in encouraging her to truly understand both sides of her racial identity, and she describes with fondness both visiting her Black relatives in North Carolina, as well as eating Filipino staples like babinka and lumpia.

The advice that Hayes has for younger Asian Americans broaching the topic of race with older family members: “Things are moving at such a fast pace. We are getting so much information so quickly. And I think, one, if we just open the floor to ask our grandparents — or our parents — their stories, and then, two, educating them on the things we are seeing in our community, [that] will help them have a better understanding. If we show them the things that are happening on social media or try to get them to heal from the trauma that they don’t realize that they’ve gone through because they are people of color in this country, [that] could also help them as well. Our history is American history. We are here for a reason and it’s not just to stand on the sidelines and watch.”

It’s that same wise sentiment of being an activist rather than a spectator that pushes the plot of “The Equalizer,” which truly makes it a show fit for the times we live in. The casting of Hayes is perfect, as she is wise beyond her years and a bright light representing both the Asian American and Black communities. We can’t wait to see where the show takes her.

“The Equalizer” is a reimagining of the classic series starring Academy Award nominee and multi-hyphenate Queen Latifah (“Chicago,” “Bessie”) as Robyn McCall, an enigmatic woman with a mysterious background who uses her extensive skills to help those with nowhere else to turn. McCall presents to most as an average single mom who is quietly raising her teenage daughter. But to a trusted few, she is The Equalizer — an anonymous guardian angel and defender of the downtrodden, who’s also dogged in her pursuit of personal redemption.“The Equalizer” airs Sundays (8:00-9:00 PM, ET/PT) after 60 Minutes.  You can stream for free on CBS.com or subscribe on Paramount+.