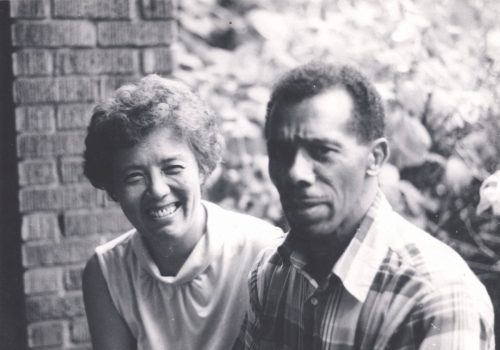 Since the beginning of the COVID-19 pandemic, anti-Asian hate crimes have been rising in number and prominence. And while outcries from our community are still not given the attention they deserve, it feels good to know that other communities of color have our back. Most of all, I am in awe of the support that Black activists and organizers have put into action. This surely isn’t the first time, nor the last that we will forge solidarity.

Without being neglectful of the often-fraught and tenuous relationship Black and Asian American communities have with one another, it’s important to point out the times that we have stood in solidarity with one another. The question that comes to my mind about the supposed lack of solidarity and the constant amplification of our divisive moments — which we, of course, have a responsibility to acknowledge and work to heal — is: Where are the times that Black and Asians have worked together, and why is there not more of a spotlight on those relationships?

Let’s get history straight: Here are five occurrences of Black and Asian allyship that every Asian American should know about.

Grace Lee Boggs began her activism as a community organizer who stood up against capitalism and stood with the Black community in Chicago. Upon marrying auto worker and Black activist James Boggs, she moved to Detroit, where she organized with unions to rebuild the city, advocating for community gardens, housing renovations, and art installations. Although her activism was localized in Detroit, the impact that she has had on activist communities is boundless — having written several books and spoken publicly on the matter. She always believed in understanding and reflecting upon oneself, not as an individual, but in relation to others. We lost Boggs in 2015 when she was 100 years old, after over 7 decades of activism.

“You cannot change any society unless you take responsibility for it, unless you see yourself as belonging to it and responsible for changing it.” – Grace Lee Boggs (n.b. The BA@M column is in and of itself inspired by Boggs’ life and work, and we hold this quote close to heart throughout all our labor and movement work.)

Although they only met twice in their lifetimes, Dr. King and Nhat Hanh, a Vietnamese Buddhist monk and peace activist, met in order to foster a transnational solidarity. Nhat Hanh wrote to Dr. King in 1965 asking for his support to end the war, and a year later, they met in person in Chicago. Despite advice from his colleagues and friends to stick to the fight for civil rights in the United States and not address the war in Vietnam, Dr. King began to speak out against the war and fight for peace. Even from across oceans, Dr. King saw the need to speak up for the civil rights of others because of the congruences in American imperialism and American racism at home.

“The greatest irony and tragedy of all is that our nation, which initiated so much of the revolutionary spirit of the modern world, is now cast in the mold of being an arch anti-revolutionary.” – Dr. Martin Luther King, Jr.

The way that Malcolm X and Kochiyama meet is an activist meet-cute: In 1963, standing outside a courthouse — a bit out of place in the crowd of Black male activists — she asks to shake his hand and says, “I admire what you’re doing, but I disagree with some of your thoughts.” He, piqued, asks which ones. Soon after, they developed a friendship. At the time she met Malcolm, Kochiyama lived in the New York City housing projects with her family, where her neighbors were Black and Latinx folks. She once said, “I didn’t wake up and decide to become an activist. But you couldn’t help notice the inequities, the injustices. It was all around you.” Kochiyama was part of the generation of Japanese Americans rounded up into internment camps. Her apartment became a gathering place for Freedom Riders. Tragically, just 16 months after their first meeting, Malcolm X was assassinated. For years, she was the unidentified Asian woman in the famous picture in Life magazine attempting to help save Malcolm X. After Malcolm X’s death, Kochiyama continued to fight for Black, Latinx, and Asian-Americans.

Learn more about this dynamic duo:
• “Malcolm X: A Radical Vision for Civil Rights” by Joe Phelan (2017)
• “Not Just A ‘Black Thing’: An Asian-American’s Bond With Malcolm X,” NPR (2013)
• “Revolutionary Friendship of Malcolm X and Yuri Kochiyama” by Sushmita Arora (2020)
• ”The Impact of Malcolm X on Asian American Politics and Activism” by Yuri Kochiyama in “Blacks, Latinos, and Asians in Urban America: Status and Prospects for Politics and Activism” (1994)
• “Inspired by Malcolm X, Asian American activist makes her own history,” SF Gate (2005)
• “When you’re in a Black group, you have to keep in mind you’re not Black. You just have to be sensitive. We have to be appreciative that the Black nationalist struggle is a nationalist struggle.” – Yuri Kochiyama

You might have the urge to say that those are isolated pairs of individuals, but guess what? Solidarity between our movements has also occurred at crucial moments in American history. In 1968, the Third World Liberation Front united several student groups at San Francisco State University including the Black Student Union, the Filipino American Student Organization, and the Asian American Political Alliance just to name a few. (Note that the Asian American Political Alliance is one of the first groups to take on the demographic “Asian American” in order to create solidarity among Asians in the United States and align with the other student groups.) Their agenda? Campus reforms, specifically ones that elevated Black Studies and later, ethnic studies as a whole.

Three years earlier, Black activists pushed for the Voting Rights Act of 1965, which offered protections to Asian American citizens, such as the right to accommodations for voters with limited English through translators and translated ballots.

And yet another historical display of solidarity: In 1968, Black Panthers came to support Filipinos when their Manilatown residences — most notably International Hotel (a.k.a. I Hotel) — in San Francisco were threatened.

Learn more about this history at Roar Mag: “Reviving the history of radical Black-Asian internationalism.”

Moving away from traditional activism, the artist Ho recognized early in life the ways that Black culture influenced and essentially formed the bedrock of American music. Uplifting the Black Arts Movement, Ho sought a way to express the oppression and struggle that Asian Americans face while paying tribute to the Black liberation struggle of the 1960s.

Ho stated, “The culture and arts of the oppressed owes nothing, needs not be thankful to, the culture and art of the oppressor. What oppressor cultural aspects there are have been refashioned and transformed, and dare we say, violated and miscegenated.” Seeing the resonance between his own struggle as a Chinese American and the Black liberation struggle, he founded the Afro Asian Music Ensemble in 1982. Aside from his music carrying titles like “Turn Pain Into Power,” Ho also produced essays, poetry, theater writing and political declarations.

“Am I a revolutionary? How should a revolutionary movement be built? What should I be studying? What more can I learn from the history of past revolutionary groups and movements? How can I transform myself to transform the world? Hopefully, the veterans can share their experiences and be supportive, yet, as Frantz Fanon pointed out, each generation must find its own mission and either fulfill or betray it.” – Fred Ho

The questions that Ho leaves us with are so vital to constructing the world we want to live and flourish in. When we ponder the divides of racism and work to foster solidarity, it’s important to think beyond the ways that our different experiences so easily slip into the so-called “oppression olympics,” i.e. thinking you have it worse than others or that your experience of racism is not valid because there are worse acts of racism. Moreover, the allure of the model minority title can lead us to belittle our own experiences of racism or claim that we have “overcome racism.” But racism is a social institution that seeps through all parts of our society, and until we come to terms and be actively anti-racist, we will never be truly free.

Our own calls to action against anti-Asian hate in the past few weeks requires a consideration of what we seek. It’s all too easy to fall into patterns of white supremacy that pit our communities against one another. The calls for better policing do not solve the problem of racism in the forms of violence and discrimination against our community. As we have seen, the law cannot protect us; for example, just last week, the man who shoved an elderly Asian woman in Queens, NY was released, and the act was not declared a hate crime despite the slurs used and the targeted assault. We simply cannot expect systems that oppress other people of color to produce justice for our community.

There are so many moments when Black and Asian community members fought against white supremacy and imperialism, and it goes to show the many ways in which our interests are aligned. Our struggles are entangled and we need one another to rise up out of the structures of oppression that trap us.

Find tons more articles and resources from the Seattle Public Library’s Resource Guide: “Yellow Peril Supports Black Power: A Reflection on Asian-Black Solidarity.” My top picks are “How Asian Immigrants Learn Anti-Blackness From White Culture, And How To Stop It” (Huffpost) and “The real reasons the U.S. became less racist toward Asian Americans, (Washington Post).

No matter what month it is, no matter what is trending in the news, we all need to take action. We need to redefine community safety, taking care of one another, and fight for racial equity together so that all of us can prosper.