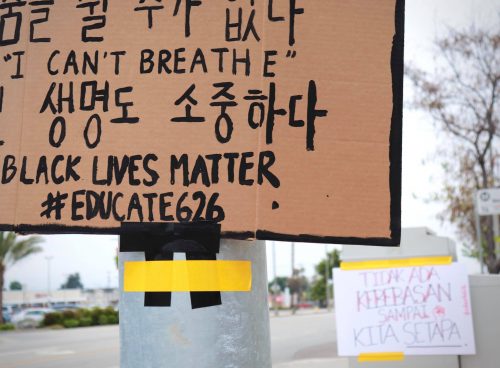 I sat cross-legged in the passenger seat of a friend’s car, listening to her vent about her Asian parents’ apathy at any mention of the Black Lives Matter movement. Although she was feeling disheartened, she was fueled by the need for change and looking for a way to communicate the movement’s goals to her father. Race alone can be an uncomfortable conversation topic for our families, but addressing our parents with an empathy tailored to the nuances of their cultural and generational differences adds an entirely new dimension.

Just east of Pasadena, the San Gabriel Valley (SGV) region of Los Angeles is an ethnic hub composed of a multitude of Asian American ethnicities. In fact, a previous Asian Americans Advancing Justice LA (AAAJ-LA) report deemed the SGV the “Capital of Asian America,” as it boasts the largest percentage of Asian Americans in the country. A majority of this population are older generation Limited English Proficient Asian American Pacific Islanders (AAPIs). Traditionally, many of these parents and family members have preconceived notions of racism, often turning a blind eye to racial discrimination faced by non-Asian communities and/or scoffing at younger generations who are more engaged and likely to speak out against racial prejudice.

It’s easy to disparage or shame older generations, but it takes time to reach common ground in a way that does not disregard their personal hardships and sacrifices. Older generation AAPIs often face discrimination such as nativist backlash for speaking in their first languages. Some may have experienced anti-immigrant sentiment, challenges with migration and assimilation, and/or difficult working conditions, particularly within low- to middle-class communities. Their personal encounters may make it more difficult to understand the plurality of racial issues with dynamics different than the racism they do experience, and thus, the topic of racism can be jarring or biased to the misdirected ear. Such barriers have, in many cases, resulted in complacency because the limited access to resources subsequently leads to a lack of understanding of important ballot measures and low voter turnout.

As this complex matter has evolved to meet the current zeitgeist, the SGV region’s younger generation creatively elevated the conversation about race in a manner accessible to older generations by starting a “silent movement.” Since June of this year, Black Lives Matter posters in Spanish, Vietnamese, Korean, Chinese, Japanese and Indonesian have been plastered at every large traffic intersection in front of grocery stores and other public areas. Across Arcadia, Temple City, Rosemead, San Gabriel, Alhambra and Monterey Park, it would be hard to miss these visual markers of quiet activism, juxtaposed by loud protests in the streets of Los Angeles.

It’s a lofty goal to raise awareness, address older generations, and spark change inspired by a national conversation on a micro-level within our communities and empower AAPIs to engage in sociopolitical action. It is a challenge that has been accepted nonetheless. The “Educate 626” group created second-language slogans including “Listen to the Voice of the Younger Generation,” “No Justice, No Peace,” and “Asian Community Supports Black Rights” — all of which are expressions ingrained with the idea that systemic change begins with education, that we must first educate ourselves and our community members in order to form opinions and break free of oppressive traditions. The unifying hashtag “#educate626” can be found across social media platforms in an effort to expand group activism and start conversations through both foot traffic and local traffic.

“I had individuals reach out to me online. Many even dropped off their handmade signs in their native language to me in person. I was inspired to see this level of participation, which spoke volumes, as we are simply doing what makes sense and [what] can be understood in our community,” said Fionne Ma, co-founder of Educate 626 and hometown resident of Temple City.

For Educate 626, finding creative solutions is just the start. The conversations between older and younger generations of AAPIs merely begins here. While the silent movement stemmed from a commitment to the Black Lives Matter movement, the #Educate626 serves as a preface to a broader end goal. Our group hopes to change the narrative of racism in a way that makes sense to our communities, while also continuing to provide in-language resources and eventually increasing civic participation among minorities at the local and federal level. When understanding and involvement from local communities increases, only then can policy and public spending priorities be reconsidered and eventually reconstructed.

History is not a static past, but a dynamic present that requires different communities to connect and build a bold, diverse, and more progressive future together. The lessons learned from this grassroots silent movement are a true testament to the importance of uniting when the world is divisive.