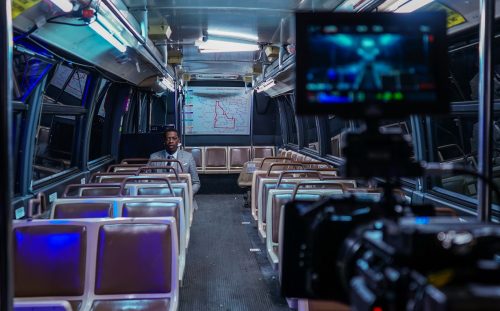 Even though it’s 2021, consistently diverse on-screen representation in the entertainment industry is a hard ask. In the last five years, there have been more films that not only center and focus on characters of color — just think Jordan Peele’s “Get Out” (2017) or Jon M. Chu’s “Crazy Rich Asians” (2018) — but are also given promotion and acclaim. But for the most part, television and film productions sideline narratives that uplift stories about people who look like us, because supposedly “marketable to a general audience.” Those same standards of whiteness resulted in the highly acclaimed “Minari” (2021) being considered ineligible for best picture at the Golden Globes, despite being an American production. (Check out Mochi magazine’s review of “Minari” here.) So what will it take to change these norms and increase representation?

Frankie Li believes the answer to that question lies behind the camera. Because of that, he founded Diverso. Diverso is a student-run organization working to put people of color in the writers’ room. Providing early connections to the industry, Diverso offers fellowships to writers of color in order to get students in career mentorship, meetings with key decision makers, and connections with a community of entertainment professionals. Their mission is to craft an industry that looks more like our complex, multifaceted society, and that the stories of all groups are authentically represented.

We talked to Diverso’s Matthew Zhang, managing director, and Mallom Liggon, director of impact and partnerships, about their two main initiatives, The Minority Report and Black Writers in Focus.

Why writers? “Every film, TV show, or piece of content starts on the page. The movies we know and love would be nothing without the structure and guiding story foundation of good writing,” Zhang says. “In this way, diversity is a systemic issue in Hollywood whose remedy also starts from the page. By focusing on writers, Diverso can shape the foundation of the entire industry to be more inclusive from the ground up.”

Starting in 2020, The Minority Report was Diverso’s first foray into paid fellowships for writers. In its inaugural year, the team collected applications from over 30 universities and named two fellows: Zoe Cheng and Alessandro Pederzoli.

Zoe Cheng shares that her summer fellowship was very interactive and included both Zoom panel calls and one-on-one chats with working executives. “My favorite panel that we had was one featuring Juel Taylor, screenwriter of the upcoming ‘Who Cloned Tyone.’ It was such an informative and casual conversation that even culminated in an invitation to set — this was pre-quarantine — although unfortunately we couldn’t take him up on that offer because of eventual COVID protocols,” she recalls. Now, Cheng is a staff writer on ABC’s show “The Rookie.”

This year, Diverso networked with over 75 universities and received funding from Issa Rae’s Hoorae and the Lin Manuel-Miranda Family Foundation. Their 2021 Minority Report call for applications — open to female-identifying, BIPOC, LGBTQ, and/or disabled student screenwriters — garnered over 335 submissions, from which they have named seven fellows.

Diverso’s newest initiative, Black Writers in Focus was not only inspired by last year’s protests erupting over racist police brutality, but also due to the fact that there are so few Black writers in Hollywood and so few opportunities for Black student writers. For Black Writers in Focus, Diverso partnered with Rideback (“Aladdin”, “It”, The LEGO Movies) and the Writers Guild Foundation to create a paid internship program specifically for Black student writers. “Most importantly, they will be paid to develop their craft — in contrast to Hollywood’s notorious unpaid internships,” Li points out.

What is rare about Diverso is their ability to acknowledge the systemic issues that plague Hollywood productions.

“Black writers are Black people, and in that case they still must deal with the unique way anti-Blackness impacts all facets of society. To begin, Hollywood’s entryways: unpaid internships and underpaid assistant jobs are already unattainable to a lot of young Black writers who can’t afford these opportunities,” Liggon says. “For Black writers that do get that chance, they often are constricted to telling stories that reflect only one slice of the Black experience. As a Black screenwriter myself currently in film school, I’m one of two in my entire program. I used to intern at a production company where I was the only Black intern, let alone Black person, in the entire building.”

Zhang adds that the barriers for Black writers are multiplicitous: “Not having someone in the selection room who looks like you and understands your perspective; not having the financial means to relocate to LA for unpaid entry-level work; and not having the access to networks many more privileged families in show business have deep roots in. These systemic issues require systemic solutions. We designed Black Writers in Focus to directly address and overcome these barriers to entry.”

Having just closed submissions at the end of February, this initiative has received 446 submissions from Black student screenwriters from over 160 universities. Moreover, the support garnered includes over $75,000 from WarnerMedia, Blumhouse, the Lin Manuel-Miranda Family Foundation, and more.

What’s even more impressive about Diverso is that they are an organization for students by students coming together from across the nation to empower the next generation of screenwriters. We can only imagine the long-term effects of these young storytellers fighting for representation and narrative plenitude: for children who will grow up seeing faces like theirs on screen, for all people of color to see that their stories, too, are “marketable,” and for #OscarsSoWhite to be a remnant of the past. Who knows? The next best picture could be written by one of Diverso’s talented fellows!

Diverso is a nonprofit organization that supports and empowers student writers of color by creating pathways that increase access to the entertainment industry. Learn more about Diverso at https://www.dvrso.org/ and keep an eye out for future fellowship opportunities.