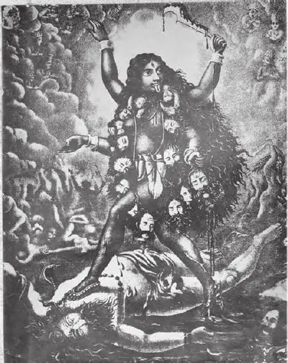 I never understood why Kali Ma was shoved in the back of my father’s altar, behind the fair goddesses. Wasn’t she the Hindu Goddess who protected her children? Why did her tongue hanging out of her mouth and her pitch-black skin attract the words “possession,” “evil,” or “shame?” I had once attended mandir during Navratri to learn more about this powerful woman I prayed to. I didn’t learn much, besides the fact that she realized the destruction she caused and transformed into her fairer, more “lovely” Gauri form.. A form that was considered pure. Free from stigmas. Free from the hatred of Blackness.

As a half-Guayanese and half-Trinidadian New Yorker of Indo-Caribbean descent, my identity is complicated, and my community’s relationship with Blackness even more so. Today, my family members are a beautiful mix of Afro-Caribbean and Indo-Caribbean descent. But underneath this mirage of multiculturalism are whispers of anti-Black racism played out through a history of political, economic, and social strife.

Back home in Guyana, my grandmother used to walk up the road to trade produce grown in her backyard. When hungry, her children would pick mangoes off trees. They would savor the last pieces of curried meat they had, not knowing when they would have the chance to eat this delicacy again. My family and their neighbors — different in religion and heritage — worked together to feed each other’s children for the sake of staying alive, one cup of rice for one loaf of bread. What else was there to think about when they lived in the rural area of Guyana — surrounded by large areas of land and sugar cane — and were secluded from the growing tensions in the towns away from them?

Maybe my father and his family were too young. Maybe they were sheltered by the bushes that bordered their home. Maybe they didn’t and still don’t want to talk about the hatred between Indo-Guyanese and Afro-Guyanese people. Due to conflict between political parties starting in the 1940’s, these communities were divided. Beatings, murders, and rapes were tallied on both sides, making it seem impossible for these groups to get along.

On the other side of my family, my mother, too, only remembers driving through the streets of Trinidad on a motorcycle, having beach limes, and living a calm island life before she moved to the U.S. But like in Guyana, Afro-Trinidadian and Indo-Trinidadian people fought over having their voices heard in the political sphere of the 1950s. In 1995, when Trinidad had its first Indo-Caribbean prime minister, the appointment fueled even more hatred between Indo-Caribbean and Afro-Caribbean people.

As a child, I was once told that I looked so Black, I could’ve been a dougla gyal. I didn’t understand what that meant and asked family members, “What was so funny about being dougla?” What was so insulting about the term “dougla”? This derogatory term labelling a Caribbean person with a mixed African and Indian descent is one of the ways people perpetuated discrimination against Blackness. The affected people were labeled too ugly, too violent. Being “too dark” pressured many women to bleach themselves to try to be whiter. Or like me, it forced us inside, where we didn’t have to be seen by people or the sun.

It was under this same sun that the discrimination started. When slavery was abolished in the 1830s and Africans no longer wanted to work the land, the British had to find a new kind of labor. Indian people — who were already facing poverty, harsh working conditions, and a caste system that stereotyped and belittled people — were an easy target upon which to propagate the idea of a “better life” as an indentured servant in Guyana and Trinidad. To keep these groups apart, planters instigated jealousy and a hierarchy between the two groups, and prejudices between the newly freed Africans and the indentured Indians blossomed due to their lack of power and money.

The anti-Black narrative pushed by colonization and prejudices in Indian culture fit right into the lifestyle practiced by the Indians who came to Guyana and Trinidad. The colorism-based stereotype of Blackness as tainted translated into the Hindu religion and caused divine forms like Kali to be associated with witchcraft and possession, when she was formerly the embodiment of power and protection. Shani Dev, a dark-skinned deity that deals with karma, caused darkness to be associated with bad luck. Gods were depicted with a blue hue instead of the “skin as dark as night” they are said to have in the texts.

Based on the caste system in India — that labeled dark-skinned people as Dalits — people with darker skin tones were considered polluted and were excluded from many civil rights. In some areas of India, they are still forbidden to sit in certain places, live or walk where higher caste members are, and touch anyone or be touched. These stories and biases that stereotype Blackness extended to the Caribbean and caused us to be separated, not just ideologically, but geographically as well. In Trinidad, Laventille is known to be a predominantly Afro-Caribbean area; whereas Penal, where my mother grew up, was mostly an Indo-Caribbean region. Although intermarriage is becoming more common in younger generations, it is still discouraged and looked down upon.

Even now in New York, after many Indo-Carribean and Afro-Carribean people migrated to the U.S., the idea of separation remains in the minds of those creating a new life. One summer, I visited Island Express in Flatbush, Brooklyn to learn how tennis rolls were made, and got into an enlightening conversation about race with the bakery’s owner Gina McCarthy. Her family is fused with an Afro-Guyanese and Indo-Guyanese lineage, but she still witnesses the prejudice against her loved ones who have an African ancestry. She told me, “This is what we’re taught. We’re taught to dislike each other.”

This dislike is very much prevalent as aunties whisper, “Black people do crimes,” and the geographic segregation continues. Richmond Hill is predominantly an area for Indo-Caribbean people, while Afro-Caribbean people are mostly located in Flatbush. But because McCarthy believes in inclusivity, Island Express is a safe haven for both employees and customers from all parts of the Caribbean.

We Caribbeans need to remember where we come from, a home infused with Indian and African traditions. Soca is the hybrid of African beats and Indian lyrics. Pepperpot is a mix of Indian and African flavors. Carnival, a time to celebrate life, is the festival where we continue to dance together, sing together, drink together, and march together regardless of our heritage. We can’t forget that what makes us so special is the blending of culture, not the continuance of oppositional conceptions designed by those in power.

So when we look at the color of our skin, the depictions in our religion, our neighbors back home and now, we can realize that what creates our Caribbean heritage is not based on maliciousness. It was formed by cultivating our best qualities alongside those who fought to survive under unjust situations. No matter our religion, our race, our sexuality, the Caribbean is the home of those who love to celebrate life, and we should continue to support the importance of every life. The Caribbean Equality Project has been one of the leading organizations that has highlighted the intersections and interweaving of Afro-Caribbean and Indo-Caribbean culture. This initiative has called us all — no matter where in the Caribbean we come from — to help support Black lives, those suffering from the pandemic, and people from the LGBTQ+ community in NYC.

As the Caribbean community grows in New York, I’ve witnessed younger generations talk back to our macoing aunties. When an aunt says “Black people are bad,” we respond, “Stop generalizing.” We can take our conversations with our family members to another level. Afro-Caribbean is still Caribbean. Indo-Caribbean is still Caribbean. We have a duty — from our culture that has always encouraged us to jump up together — to fight for and support each other as well.

One Reply to “Dear Indo-Caribbean People, Let’s Not Be Like Our Macoing Aunties”