AAPI Organizers Turn Out the Vote in Georgia 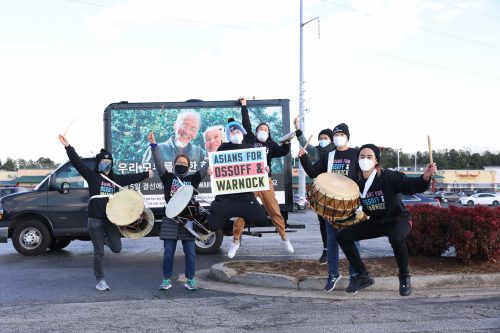 Between November 7, 2020 and January 5, 2021, women of color and Asian American and Pacific Islander organizers helped Democrats Jon Ossoff and Raphael Warnock flip the Senate by winning both runoff elections in Georgia. This rare opportunity to unseat both incumbents has national implications because it gives a chance to enact the policies of the new Biden administration.

This is no easy feat, because the special runoff election, which was triggered when no candidate gained above 50% of votes in the November general election, was designed to prevent candidates backed by Black and minority voters from winning. Historically, it has worked as intended by placing hurdles for voters, oftentimes minority and low-income individuals who have limited capacity to reach polls in the first place, requiring them to show up to the polls once again for an election they had already voted in. This is in addition to voter suppression through poll closures and voter roll purges.

This time, however, voters in January turned out in overwhelming numbers — just weeks after a contentious general election — to choose new individuals to represent them in the U.S. Senate. The victories belong not only to the new senators but to the marginalized communities whose votes were previously taken for granted.

The power of coalition

For the runoffs, Black, AAPI and Latinx organizers built on the work they have been doing for years. The teams share a common thread: They are full of young, women and nonbinary organizers. They used hyperlocal strategies, commissioned local artists and spoke to voters in their language. The result was a winning campaign that people wanted to be a part of and was “fun, energetic and women of color-led,” as described by volunteer manager Phi Nguyen.

Jon Ossoff and Raphael Warnock’s wins are the result of years of organizing and previous losses. Let’s take a look back to understand how it happened: President Joe Biden’s win in November was partially the result of Fair Fight, the organization that Stacey Abrams founded to mobilize voters after her 2018 election loss to Brian Kemp, then-Secretary of State. Channeling her energy to fight voter suppression, Fair Fight registers voters and ensures elections are fair by, for instance, requiring that all ballots are counted.

Following Fair Fight’s lead and Georgia’s flip in November, organizers from different communities pulled together again to elect new senators. “Organizations like Fair Fight, Asian American Advocacy Fund PAC, Mijente and Georgia Disability Vote Partnership believed in reaching out to communities, and that’s what helped us gain the field margins necessary to win,” organizer Mia Ives-Rublee said. As a Korean American transracial adoptee, Ives-Rublee began organizing in the disability community first, then joined AAPI progressive organizers who put together a contingent to attend the March for Our Lives protest in DC.

Vivian Chang, an organizer who works with Asian Pacific Labor Alliance, explained that “states like Georgia were previously overlooked as ‘red states’ when they are really voter-suppressed states.” In response, local organizers took on the task of mobilizing voters on their own by knocking on doors, registering new voters and most importantly, making sure they cast their ballots.

“It’s night and day comparing the way that the team customized outreach to voters, not just by language, not just by surface-level ethnic grouping,” Chang said. “By using hyperlocal strategies to reach specific neighborhoods, by commissioning local artists who reflected the community,” their efforts paid off.

“The full force of that power was finally recognized by the rest of the country in the November 2020 election when Georgia went blue,” organizer Phi Nguyen said. She began registering Vietnamese voters in the 2016 election, then organized Asians for Ossoff in 2017 with PIVOT, the Progressive Vietnamese American Organization.

Biden’s win in Georgia proved that states in the South are capable of change and that the political landscape is changing. However, his win alone would not realize a progressive agenda. For too long, bills have died on the Senate floor or in committees because of the Republican majority. If Republicans continued to retain control of the Senate, there would have been no hope for Biden’s agenda to be voted on. Instead, Ossoff and Warnock’s victories “unlock” Congress for the progressive agenda by securing a Democratic majority in the Senate. A progressive agenda is now a difficult but attainable goal.

This is a win for organizers who have been fighting for immigration reform, gun safety and disability rights to name just a few issue areas. “I knew how important the runoff election was in being able to pass more progressive legislation on the Federal level,” Ives-Rublee said.

Realizing the stakes of this election, many Asian Americans across the country wanted to help flip the Senate. The Asian American Advocacy Fund (AAAF) formed Asians for Ossoff & Warnock to mobilize the AAPI community. They produced ads in English, Vietnamese, Korean and Chinese. They also formed a channel on Slack, a popular communications platform, to organize volunteers for text- and phone-banking.

The sense of community was strong both on the ground and on Slack. When Jenny Hong, a volunteer from California, asked the Slack community for advice on answering a voter’s questions, the response from volunteers was overwhelming. Hong had been faced with a woman who expressed doubts about student loan forgiveness and who felt it would make people lazy, in addition to devaluing her own hard work.

“When I first called this lady, her initial response was, ‘Sorry, I’m too busy to vote.’” Hong followed up several times and translated information to Mandarin, engaging the voter on issues that were important to her.

“Many voters had never been contacted by a campaign before — they had no one to talk to in their lives about politics,” Chang said.

Until now. In such a contested and consequential election, with the balance of the country resting on one state, every community mattered. “We would go into neighborhoods full of Korean Americans, Bangladeshi Americans, Vietnamese Americans and have these quiet conversations about what they were worried about in their communities,” Ives-Rublee said.

“I’m still a little worried because she doesn’t like ‘congressional Democrats’ generally and will vote by party if she has trouble remembering the names,” Hong said. But when she got off her last call with the voter, Hong said the voter told her, “[I’ll] go vote first thing in the morning on the way to work.”

The voters and volunteers go forward with a sense of efficacy, chipping away at the myth of apolitical Asian Americans and changing the outcomes because they voted. Chang thanks the longtime AAPI organizers: “Without the trust and infrastructure they built, our work could have been met with more skepticism and less willingness to break out of the status quo.”

Now that the new senators have been sworn in, these organizations are just getting started. “We have to be organizing year round,“ Ives-Rublee said. The Senate majority is the result of a coalition, including “immigrants and undocumented folks who put in blood, sweat and tears to win this,” Chang said. For the first time, Asian American community campaigns captured the attention of national media.

In reality, their work has been years in the making, and elections are only part of it. Organizations like AAAF work year round on mutual aid and helping people obtain citizenship. “We will continue to organize and build political power so that our communities have the tools they need to build a future in which we can all thrive,” Nguyen said. Currently, Congress is debating policies such as raising the minimum wage (Fight for 15) and cancelling student debt, to name a few. It’s a sign of progress for organizers whose work is not yet done.Nonetheless, Asians for Georgia have put Asian Americans on the electoral map. They proved that there is power in building trust through multiethnic coalitions and by talking to their own communities in their languages. As Chang commented of the organizers, “They constructed a new narrative for Asian American voters that overturned the simplistic view held by many mainstream (white-led) news media and electoral institutions.” Much work was done, but much work is still to be done to continue the progress. Fortunately, Asian Americans have proven they’re up for the task.